Yulia Skripal, the daughter of the poisoned double agent Sergei Skripal, allegedly called her cousin in Russia to tell her "everyone was recovering." Yulia had been found with her father and had spent weeks in a coma. 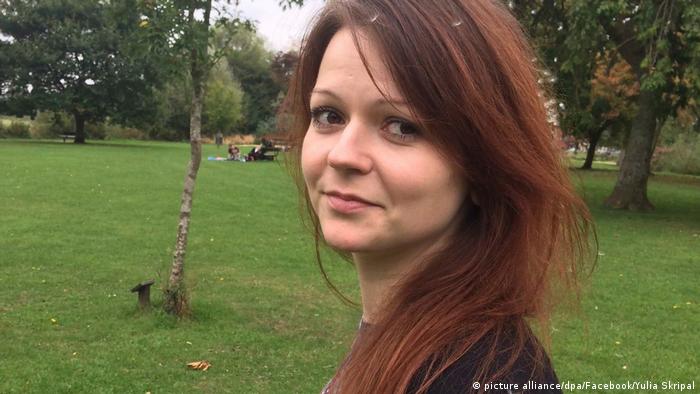 Yulia Skripal was out of critical condition before her father, but details of their health remain unclear

A recent audio recording, said to capture the conversation between the poisoned Yulia Skripal and her cousin in Russia, raised new questions about the widely publicized spy saga on Thursday.

The recording was broadcast on an evening talk show program of Russia's state broadcaster Rossiya 1, with Skripal's cousin Viktoria appearing in the studio. Viktoria stated she was confident she had been talking with Yulia Skripal, although presenters said the authenticity of the recording could not be verified.

She also tells Viktoria that she was given a "temporary" phone. The cousin then tells her she intends to visit London and see her on Monday, with the woman's voice replying "They are not going to give you a visa, Vik."

Asked about her father, the woman described as Yulia responds that Sergei Skripal is "resting now, sleeping." Sounding slightly choked up, she adds that "everyone's health is normal and there are no irreversible things." She then says her goodbyes.

Notably, the woman gives no details on last month's poisoning in Salisbury.

Talking to Russian media, Viktoria Skripal said her cousin sounded "healthy" and "normal." The phone call was presumably recorded without Yulia's knowledge, with Viktoria saying all her phone calls were recorded automatically due to the nature of her work in finance.

Less then an hour after the recording aired in Russia, UK police published a separate statement by Yulia Skripal, where she thanked "the people of Salisbury that came to my aid" when she and her father were found unconscious last month.

"I woke up over a week ago now and am glad to say my strength is growing daily," she said in the comments published in English.

"I am sure you appreciate that the entire episode is somewhat disorientating, and I hope that you'll respect my privacy and that of my family during the period of my convalescence."

On Friday, doctors in the Salisbury hospital said Sergei Skripal was also no longer in critical condition. The 66-year-old former colonel of Russia's military intelligence was responding well to treatment and "improving rapidly," they said.

The Thursday statement and the phone call mark the first published communication from Yulia and Sergei Skripal, who found themselves in the center of a major international scandal.

Following the apparent gas attack on the Skripals on March 4, London stated they were poisoned by a nerve toxin dubbed Novichok, which was first developed by Russian scientists. UK doctors were fighting to save their lives as the two were reported to be in a coma.

Meanwhile, the UK accused Moscow of being the most likely culprit behind the attack and launched a wide-ranging diplomatic offensive against Russia. The UK's position, however, was significantly undermined earlier this week, when the head of a key UK laboratory publicly stated that the substance used in the attack could not yet be traced back to any specific country.

Russia has repeatedly rejected any involvement, portraying the scandal as a smear campaign to tarnish Moscow's image. On Thursday, Russia's ambassador to the UN Vassily Nebenzia described it as a "megaprovocation" set up by "secret services of certain countries."

He also restated Russia's previous inquires about Sergei Skripal's pets, saying that their health and whereabouts could provide clues to the investigation. Earlier, UK authorities said the two guinea pigs died, most likely of dehydration, in the sealed-up Skripal apartment in Salisbury. The cat "was also found in a distressed state and a decision was taken by a veterinary surgeon to euthanize the animal to alleviate its suffering." the UK Department for Environment, Food and Rural Affairs (DEFRA) said in a statement.

The Russian embassy in the UK also commented on reports that the pets' bodies have been cremated to eliminate the risk of poisoning.

"Regarding the dead guinea pigs and the malnourished cat, it is said unofficially that they were taken to the Porton Down facility and incinerated there," a spokesperson said. "But it remains unclear if their remains were ever tested for toxic substances, which would constitute useful evidence, and if not, why such a decision was made."

Johnson: 'Overwhelmingly likely that it was Putin's decision'

Yulia came to visit her father

Russia also decried the UK for not giving Russia's diplomatic staff access to the Skripals. Sergei still holds dual Russian and British citizenship despite being convicted for treason in Russia over his work for the MI6. He arrived in the UK after a Cold War-style spy exchange in 2010.

His 33-year-old daughter Yulia moved with him, but soon returned to Russia and was based in Moscow, where she had spent most of her life. She reportedly came to the UK to visit her father on March 3.

Last week, the UK said it was considering the request of Moscow to allow consular access, but added they were taking into account "our obligations under international and domestic law, including the rights and wishes of Yulia Skripal."

Viktoria Skripal to travel to Salisbury

The news of the Skripals' recovery prompted Russia to once again insist on being granted access on Thursday and Friday. Following Yulia's statement, Russia's London embassy said it received an "urgent note" from the UK's foreign office. According to the note, Yulia had received the embassy's suggestion to "organize consular access." The embassy did not say if Yulia agreed to it.

Yulia's cousin Viktoria, who recorded the phone call, may prove to be instrumental in the dispute. She was intent on traveling to the UK on Monday to visit Yulia in the hospital and eventually bring her back to Russia. Russia's ambassador to the UK, Alexander Yakovenko, publicly pledged assistance to Viktoria Skripal during her visit. Separately, Viktoria said she was in contact with Yakovenko and praised him for helping her obtain her passport. Yakovenko reportedly promised that embassy employees would meet her at the airport, were she to be approved for a visa. On Friday, however, the UK's Home Office rejected her application because it "did not comply with the Immigration Rules," a spokesman said. RIA news agency later quoted Russian Foreign Ministry Spokeswoman Maria Zakharova as saying that Moscow wants explanations regarding the visa refusal.

Viktoria has repeatedly stated doubts about London's account of the Skripal poisoning and floated alternative theories, including poisoning by bad fish or an attack by the mother of Yulia Skripal’s boyfriend.