The City of London dodges Brexit bullet — for now | Business | Economy and finance news from a German perspective | DW | 14.01.2022

The City of London dodges Brexit bullet — for now

After warnings that Brexit would dent one of the few sectors where the UK is a global winner — financial services — it turns out the City is relatively unscathed. But some ask if COVID has just delayed the inevitable. 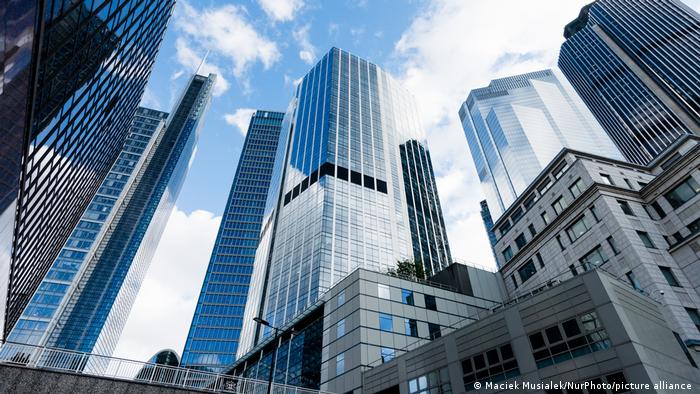 The number of jobs and institutions in the finance sector shifting from the UK to the EU due to Brexit has turned out to be far smaller than some expected.

Warnings in 2018 were stark: Brexit could result in the loss of 75,000 jobs and up to £10 billion (€11.1 billion, $12.9 billion) in annual tax revenues. Sir Mark Boleat, an ex-chairman of the City of London Corporation, warned of what he called the nuclear scenario in which the European Central Bank (ECB) would force relocation of euro-denominated trading from London to the eurozone, with the potential loss of 230,000 jobs in the City, London’s financial hub.

As of end-2021, asset transfers totaled £1.3 billion, according to financial group EY, and the largest investment banks located in the UK have revised down the number of staff that will be relocated to the EU to just under 7,400, a tiny percentage of the 1.1 million people working in finance, 400,000 of whom are based in London. The financial services sector accounts for about 12% of Britain's GDP.

That is not to say Brexit has been impactless. Some 44% of UK-based financial services firms are moving or planning to move operations or staff to the EU (operations mainly to Dublin and Luxembourg and staff to Paris), EY found. Trading on London’s stock market also fell 40% at the start of 2021, with London not permitted to offer EU-listed shares to clients outside the UK. Amsterdam took advantage, overtaking London to become Europe’s biggest hub in terms of equity volumes, according to Cboe Global Markets.

"While some business has inevitably relocated to the continent, predictions of tens of thousands jobs leaving the City have not come to fruition," Catherine McGuinness, policy chair at the City of London Corporation, told DW.

"At the same time, many more thousands of jobs have been created as EU firms have shifted some of their operations to the City to continue to operate in the UK market," McGuinness said.

“We have also seen developers and investors continue to show confidence in the Square Mile [The City of London] through major planning applications. In 2021, a total of 4,360,944 square feet (400,000 square meters) of new office floorspace was approved — an increase of almost 70% year-on-year," McGuinness added.

Brexit delayed: Will the penny drop?

But some believe the full implications of Brexit are still working their way through the system.

"The pandemic has made moving people around a lot harder than it would have been otherwise," Russ Mould, investment director at investment firm AJ Bell, told DW.

Brussels has not yet implemented a new regulatory framework with the UK in financial services that was agreed in principle in December. This is reportedly seen by many in the industry as key to rebuilding trust after the ECB pressured banks in London to "adequately staff" their new EU hubs after delays due to pandemic restrictions, EY said.

Brussels meanwhile still wants the disagreement between the EU and the UK over the Northern Ireland protocol fixed before it can go ahead.

As EU business leaks away, London's City aims to reinvent itself

Down but not out in London

"I hope this does not seem chauvinistic, but London still has a huge amount in its favor," says Mould.

"It offers rule of law and an independent central bank. It offers a language that is used for business around the globe. And the City offers an ecosystem of banks, advisers, lawyers, fund managers and hedge funds that serves a deep pool of liquidity which can still provide appropriately priced capital to companies who need it so they can invest, innovate, grow and create jobs," Mould said.

London remains the world’s second-biggest financial center behind New York when infrastructure, reputation and business environment are taken into account, according to the Global Financial Centres Index 2021.

"Brexit and the loss of rights for UK companies in Europe certainly has the vultures circling, but London is a big beast, and any wounds are superficial rather than terminal," Lee Wild, head of Equity Strategy at interactive investor, told DW.

"The inevitable relocation of some jobs to the continent post-Brexit has been a trickle rather than the tsunami that some had predicted. Whether this remains the case in the years ahead, especially once COVID restrictions are removed making travel much easier, is unclear.," Wild added.

"There are plenty of reasons London will retain its crown as Europe’s primary finance hub," said Wild. "Its competitive pricing, liquidity and spread of financial products and services will make it tough for anyone else to overtake."

The City is strong in foreign exchange and derivatives trading and dominates markets like commercial insurance, bond trading and fund management, with around a third of its transactions involving EU clients.

London noted a record number of companies making their stock market debut in 2021. The 122 initial public offerings (IPOs) — the highest number since 2007 — made a market capitalization of £16.8 billion.

But the UK’s share of the global IPO market is dwarfed by other more lucrative financial products and services, Wild said, noting that Euronext also had a record IPO year.

"It’s unlikely that the buoyant market conditions of 2021 will be repeated in 2022, but London is a well-oiled machine and will remain a prime destination for companies wanting to raise money. London’s world-leading derivatives clearing market is an obvious target for the EU, but shifting positions back across the Channel is a costly process and deadlines are likely to be kicked down the road," Wild emphasized.

"The real risk (for London) is not a 'big bang,' but a slow deflation as activity moves to other centers, most probably in the US or Asia, and this only if the UK fails to respond to competitive pressures from other global financial centers," Jack Neill-Hall of financial sector lobby group TheCityUK, told Reuters news agency.

There may of course also be a touch of hubris here. "The challenges facing my industry are geographically agnostic," Rupert Pybus, global head of marketing at Edmond de Rothschild Asset Management in Paris, told DW.

"London thinks it works harder and smarter than Paris, but that's not been my experience," Pybus — an Englishman who left his 25-year career in the City to work in Paris last year — concluded.