Former German Chancellor Helmut Schmidt and his wife Loki were art lovers. The exhibition "The Chancellor's Art" gives some insight into their collection. Former German chancellor Helmut Schmidt (1918-2015) held the arts in high regard, both as a public figure and a private person.

For instance, it is well known that he was an avid and talented piano player.

But he also revealed his deep appreciation of art throughout his career as German Chancellor. In 1979, he had Henry Moore's steel sculpture, Large Two Forms, erected in front of the Chancellery building in the former German capital, Bonn. During Schmidt's state visit to East Germany in 1981, he planned a visit to the Güstrow Cathedral to get to see Ernst Barlach's sculpture Der Schwebende (Hovering man).

His admiration for Barlach resulted in the Chancellor and his wife regularly visiting the Ernst Barlach Haus museum in Hamburg. The museum, together with the Helmut and Loki Schmidt Foundation and the Federal Chancellor Helmut Schmidt Foundation, is now showing the private collection of the renowned couple. It includes about 150 paintings and sculptures.

Helmut and Loki Schmidt (1919-2010) collected works of art for decades, resulting in a veritable "mixture of earnest collection and hodgepodge," as museum director Karsten Müller says. To be fair, for all their love of the arts, the two were not art experts.

"They were not art collectors in the strict sense of the term. They weren't driven by a passion to get this piece and that piece but rather, I think, they agreed on what they liked and then acquired works accordingly during gallery visits, for example, or by browsing through auction catalogs," Müller said in an interview with German public broadcaster NDR. 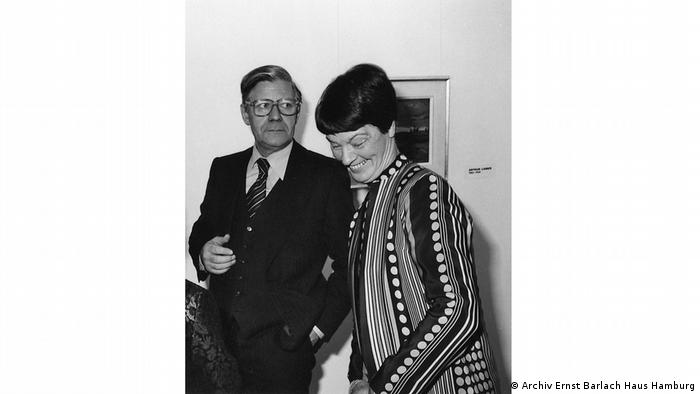 Helmut and Loki Schmidt at the opening of the exhibition 'Group of Seven. Canadian Landscape Painters' in 1977

"They had a rather relaxed attitude towards making the best of good opportunities as they presented themselves: As a result, their apartment was filled (with art) over the decades."

Art as the backdrop for world politics

Most of the Schmidts' collected works were hung or stood in their private house in Hamburg-Langenhorn, which was located in the midst of a middle-class housing area.

This was also the backdrop of numerous receptions of guests of state invited by the Chancellor. These included Soviet party leader Leonid Brezhnev (1906-1982) and French President Giscard d'Estaing (*1926).

You could say that, in a way, Schmidt conducted world politics from his living room.

The Schmidts did not collect art with any particular intention, says Stefan Herms, managing director of the Helmut and Loki Schmidt Foundation. Their collection was primarily based on "individual emotional decisions."

Art played a big role in the Schmidts' household, where many paintings adorned the walls in a rather dense and random formation, taking inspiration from the Petersburger hanging style. Numerous works in their collection, however, had to be restored over the summer of this year as the Schmidts had not taken professional care of their often rather valuable works.

The fact that Helmut Schmidt was a prolific chain smoker did not help in keeping the artworks in the best condition.

Residential art at a museum

North German sculptor Ernst Barlach (1870-1938) and expressionist painter Emil Nolde (1867-1956) were among the Schmidts' favorites. Helmut and Loki Schmidt also maintained personal ties with the famous artists' colony in Worpswede: Works by Otto Modersohn, Paula Modersohn-Becker and Fritz Overbeck are also part of their collection and now on display in the Ernst Barlach Haus.

The selection of art presented at the art show also reveals the Schmidts' soft spot for artists who had been defamed as "degenerate" during the Nazi era.

But for many visitors to the exhibition, there are some surprising treats to discover, like two rather special clay figurines: One shows Helmut Schmidt in his role as the head of state, wearing a proper suit, while the other presents his then-challenger in the race for the chancellorship. That was the Bavarian Premier Franz-Josef Strauss, who is depicted wearing lederhosen and holding an overflowing glass of beer in his hand.

This memento from the federal election is now 40 years old. But instead of being opponents, Schmidt and Strauss — in a rather reconciliatory fashion — appear to need each other in this constellation, as they are a set of salt-and-pepper shakers.

"He was a serious opponent," Schmidt one said about Strauss — and placed the salt and pepper shaker in the guest toilet of his home.

The former home of Helmut Schmidt, who was Germany's chancellor from 1974 to 1982, and his wife Loki, was the house of art lovers. Their foundation is offering a virtual tour of the couple's residence.

A garden gnome painted by former German Chancellor Helmut Schmidt has been auctioned for €3,000. The figure contains some personal references.

Helmut Schmidt was Germany's second Social Democratic chancellor. Early on, he became known as a capable crisis manager and remained one of Germany's most distinguished elder statesmen until his death.

The Ernst Barlach Haus in Hamburg is the first museum to present the art that former chancellor Helmut Schmidt and his wife collected.