The former home of Helmut Schmidt, who was Germany's chancellor from 1974 to 1982, and his wife Loki, was the house of art lovers. Their foundation is offering a virtual tour of the couple's residence.

For their golden wedding anniversary in 1992, Helmut and Loki Schmidt established a foundation for the promotion of science and research, as well as for the preservation of their cultural and political heritage.

It's a huge one. Throughout their lives, former German Chancellor Helmut Schmidt (1918-2015) and his wife Loki (1919-2010) collected an extensive archive in the fields of art, music, literature, society and politics. Their house in Hamburg was so full that they even added an additional building on their property to accommodate these works.

Now, just over a year after Hemut Schmidt's death on November 10, 2015, the public can view parts of this exceptional collection - through a virtual tour, for now.

On the website of the Helmut and Loki Schmidt Foundation, visitors can stroll through the estate and the surrounding gardens, with a 360-degree-view. It is possible to zoom into objects and many of them can be clicked to find out more information. 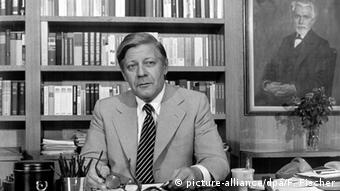 Helmut Schmidt was chancellor of West Germany from 1974 to 1982. He saw through the resolution of great political crises, such as the oil crisis in the 1970s or the terror of the Red Army Faction (RAF) during the events known as the "German Autumn."

Schmidt's decisions were often controversial, but the population admired his straightforwardness and his iron will. In 1982, as a result of strong parliamentary opposition to his policies, the chancellor was ousted from his office through a vote of no-confidence. He retired completely from politics in 1986.

After his political career, Schmidt became a sought-after across-the-board counselor, analyzing the political, economical and social issues of the country.

He stayed alert until the very end of his life. Despite smoking bans, he would typically smoke his menthol cigarettes wherever he was.

The private life of the Schmidt couple

Helmut and Loki Schmidt were married for almost 70 years - until her death in 2010.

The virtual tour through the Schmidt residence provides insight into the everyday life of the couple, without intruding in their intimacy by avoiding the bedrooms and bathrooms.

The tour was realized by the Hamburg-based production company Filmreif Pictures. The editor-in-chief of the weekly newspaper "Die Zeit," Giovanni di Lorenzo, serves as the guide for this virtual tour. As Schmidt was the director of the paper for several years, the journalist was a close associate who knew the house very well. Di Lorenzo tells different stories about the objects that can be seen, about the paintings, and what happened in each room of the house.

The whole house radiates warmth. Even though the Schmidts had other residences, this one was truly their home. They wrote in their will that they wanted to have this property open to visitors. This virtual tour is the first step towards the realization of their last wishes.

Leaders from around the world have descended on Hamburg to pay tribute to Helmut Schmidt, a former chancellor of West Germany. DW has collated some of the key quotes and comments from the Social Democrat's farewell. (23.11.2015)

Condolences on his death have been pouring in worldwide, also from the music world. Even as Chancellor, Schmidt took time for daily piano practice - and he participated in two respectable recordings. (11.11.2015)

Helmut Schmidt's passion for politics and the arts

Former German Chancellor Helmut Schmidt, who passed away on November 10, was a man of many talents. He was a skilled speaker and maintained a deep interest in art and music. (10.11.2015)

The former home of Helmut Schidt, who was Germany's chancellor from 1974 to 1982, and his wife Loki, was the house of art lovers. Their foundation is offering a virtual tour of the couple's residence. (17.11.2016)

Helmut Schmidt was Germany's second Social Democratic chancellor. Early on, he became known as a capable crisis manager and remained one of Germany's most distinguished elder statesmen until his death. (22.11.2015)

Why buy an expensive camper when you can convert your minibus or transport van? Vanlife is a lifestyle trend that is gaining more and more followers.

After work, a business trip or a vacation, people head home. Emanuele Coccia, an Italian philosophy professor, wrote a book about what makes home so special — a space for privacy, pets, clothes and of course: people!