"Here's looking at you, kid!" Swedish-born actress Ingrid Bergman became a world star with Humphrey Bogart in "Casablanca." The 100th anniversary of her birth is being celebrated in Europe and the US.

Ingrid Bergman was described as "a modern icon, an emancipated woman, a fearless actress, and a shining example of new realism" by the Cannes festival management earlier this year.

The official poster of the world's most important film festival depicted the star with a white background and striking simplicity. On the poster she does look very beautiful, indeed - and immensely likeable. At the same time, the black-and white design is reminiscent of those numerous realistic movies in which Ingrid Bergman starred far away from Hollywood.

It was no coincidence that Cannes chose Ingrid Bergman as its face this time. She was born 100 years ago, on August 29, 1915 - and she arguably became one of the most glamorous movie stars of the last century. She continues to appeal to the masses even in the current digital age.

Unlike some of her celebrity peers, Ingrid Bergman was a woman of many facets: She was Swedish, and born to a German mother who died when she was three years old. She became a star of early Swedish cinema, while also conquering the hearts of theater audiences with her performances in stage plays by Ibsen and Strindberg.

In 1938, just before the outbreak of World War II in Europe, Bergman went to Hollywood. She quickly rocketed to fame, playing alongside stars like Humphrey Bogart and Cary Grant, Spencer Tracy and Gary Cooper. Her shy dialogue with Bogart in the classic "Casablanca," and her sad, pining look at the end of the movie went down in cinema history. 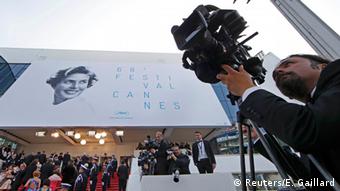 Still drawing Attention even in 2015: Ingrid Bergman on the official poster of the Cannes Film Festival

Bergman's countenance became iconic, and her film kiss with Bogart became one of the most famous kisses of the 20th century.

With the success of a lifetime already in her pocket, Ingrid Bergman kept going. After she fell in love with the Italian film director Roberto Rossellini, she reinvented both her private and professional life all over again - much to the chagrin of her conservative American fans.

She starred in seven films produced by Rossellini, and her extramarital affair with the director didn't sit well with conservative US audiences.

Her films from that era also weren't her most popular. They were socially critical, existentialist dramas in black-and-white, and turned out to be too much to swallow for the audiences that identified Bergman only with "For Whom the Bell Tolls" and "Casablanca."

But Ingrid Bergman and Roberto Rossellini weren't deterred. They married and had three children together, and the Hollywood star disappeared from the US screens for a few years.

Bergman's reception in Europe was different. With films like "Stromboli" (1950) and "Journey to Italy" (1954) she'd enthused European audiences even before the Nouvelle Vague in Britain and France and the New German Cinema in Germany started to reinvent the art. 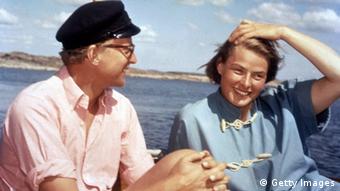 It was then that Bergman, then 40, made a comeback in Hollywood in more mature roles, playing in films like "Anastasia," "Indiscreet" and "Goodbye Again," and co-starring with Yul Brynner, Cary Grant, Anthony Perkins, and Anthony Quinn.

From then on she found it increasingly challenging to fit into the glitter and glamour of Hollywood - perhaps due to her war-time experiences in Europe. Her on-camera appearances tapered down, though in 1964 she filmed "The Visit" with Swiss director Bernhard Wicki, an impression adaptation of a play by Friedrich Dürrenmatt. She also worked in television and theater, but she finally withdrew from film business in the 1970s.

At the end of the 70s she returned with yet another memorable performance in "Autumn Sonata," this time starring for her compatriot, film director Ingmar Bergman, with whom she hadn't worked before. She played a heartwarming mother-daughter relationship opposite Liv Ullman.

Movie-goers were deeply moved not only by the film, but also because the actress had made her health problems public: She was suffering from cancer.

A brief appearance in the TV movie "A Woman Called Golda" in 1982 was to be her last performance in front of the camera. She died a few months later on her 68th birthday. 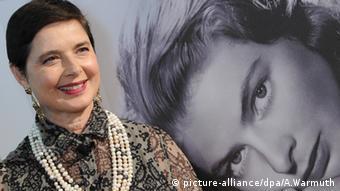 Isabella Rossellini is organizing some of the Bergman events this year

Bergman year of festivals and exhibitions

This year, the memory of the charismatic star is alive everywhere. In Sweden, the celebrations in her honor began on August 20 with her daughter Isabella Rossellini opening the Bergman Festival.

The Museum of Modern Art in New York is staging a retrospective of her films from August 29 - September 10, where her four children will be on hand to present her works.

In September and October, Isabella Rossellini is organizing "A Tribute to Ingrid" in New York, London, Paris, and Rome - bringing together Europe and the US, the two very different worlds in which Ingrid Bergman enjoyed her enormous success.

Man Ray dared mix of art and photography and spiced up his works with his favorite motif: the female body. On the 125th anniversary of his birth, here's a look at his greatest work and revolutionary technique. (27.08.2015)

Morgan Freeman has long become a household name with his inimitable voice and impressive acting skills. He turns 85 on June 1 — and has half a century in show business to look back on. Here are some highlights.