A true icon of pacifism and class struggle as well as one of the most recognized German artists of the 20th century, Käthe Kollwitz was born 150 years ago. DW takes a look at her life and art. 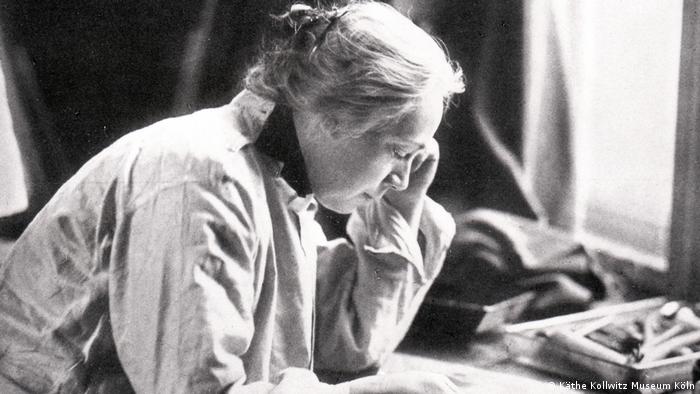 Born July 8, 1867, Käthe Kollwitz was the fifth child of Carl Schmidt and Katharina Schmidt from Königsberg (known today as Kaliningrad). Her father recognized her talent for drawing and showed great support for her artistic development by sending her to a private arts academy. This was unheard of in the mid-19th century, as women were not admitted at state-run academies of that caliber at that time.

She went on to take private lessons in Berlin and in Munich. Having married her childhood sweetheart, medical doctor Karl Kollwitz, the pair moved to Berlin where they lived in an apartment that also served as Karl's surgery. This is where Käthe got to witness the state of squalor that many impoverished people in Berlin were living in at the time, observing the clientele that would come to her husband's practice. She went on to chronicle their hardships in her art.

Kollwitz wrote the following words in her diary in September 1909: "Man abandons wife. Wife bewails her abandonment. It's the same old song. Disease, unemployment, booze - on repeat. This one had 11 children. Five of them are still alive, but the grown-up ones have all died." 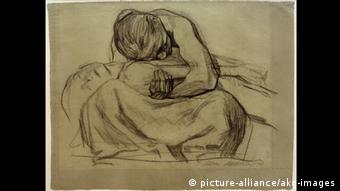 The plight of children was particularly upsetting for Kollwitz, something she witnessed firsthand in the immediate proximity of her husband's work. She decided to specialize in depicting the misery of those suffering poverty and oppression.

The first major cycle of work she presented portrayed the famine of Silesian weavers in the years 1891 and 1892.

For five years, she concentrated her efforts on highlighting the undignified conditions that the weavers had to live under, resulting in a major rebellion.

The second major cycle of her work also picked up on this theme: Kollwitz illustrated scenes from the German Peasants' War of the early 16th century. The peasants' struggle against the feudal overlords is depicted in great detail in this cycle, highlighting their aspiration of being treated as equals. Kollwitz's Peasants' War cycle, created between 1902 and 1908, shows the revolt of the peasants in seven stations with vivid imagery. While the final image depicts the ultimate defeat of the peasants, it portrays them standing upright, having taken on the spirit of the early renaissance with its emphasis on humanism, which later would pave the way for the reformation of the church to take root. 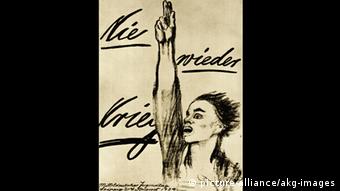 Following her son's death at the beginning of World War I, Kollwitz became an avid pacifist

One of her sketches in 1903 shows a mother with her dead son - an all-too-familiar subject for Kollwitz. Her mother had lost her first child, but in her husband's practice there were also countless instances of children suffering and dying.

Kollwitz's incredible talent for portraying emotions such as grief and inner conflict were already visible in her early pieces. Her ability to reduce everything in her work to the portrayal of pain remains her signature. Her preferred medium used to interpret grief and bereavement in such realistic ways was the printing press.

No other artist has ever tried so many techniques in black-and-white printing as Kollwitz.

Hannelore Fischer, director of the Käthe Kollwitz Museum in Cologne, which houses the most comprehensive collection of Kollwitz's work, says printing allowed Kollwitz to employ a medium that could spread her political messages with great ease and at little cost. There was no other artist quite like her, both during her lifetime and since.

This may be why it's difficult to categorize Kollwitz in any way. While nearly all artists of the early 20th century were moving away from literal depictions with the onset of the avant-garde movement, Kollwitz decidedly went against the grain, finding her artistic home somewhere between naturalism and realism. 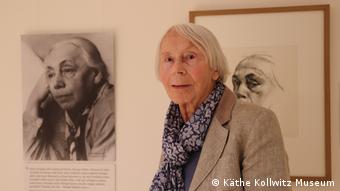 Kollwitz' granddaughter says her grandmother's work is impossible to pigeonhole

Her 94-year-old granddaughter Jutta Bohnke-Kollwitz, however, told DW that there is no "ism" to do justice to her work. The only term she can think of to describe her grandmother's work is "individualism," she said, adding that because Kollwitz never had any students, there was no one to inherit her approach.

"Her eyes exuded a suggestive power. She had a certain way of looking at people. But she also laughed a lot, and celebrated a lot," her granddaughter remembered.

Her memories of a jovial grandmother, however, are in stark contrast to the roughly 100 self-portraits Kollwitz produced in her lifetime, in which she looks rather stern and grief-stricken.

Kollwitz's own life was also affected by the kind of sadness that so many of her motifs depicted. In 1914, her son Peter died having volunteered to join the military at the start of World War I. Kollwitz had supported her son in his pursuit of fighting for his country despite her husband's reservations. Less than three weeks later, he was killed. 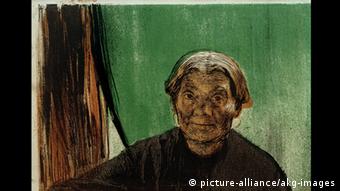 Kollwitz decided to turn her grief into art: she began designing a memorial monument for the war cemetery in northern Belgium, where Peter Kollwitz is buried. It took almost two decades to come together but in 1932, her cenotaph for her fallen son entitled "The Grieving Parents" was finally completed and erected at the graveyard near the Belgian town of Ostend.

The sculpture is comprised of two figures, both kneeling in reflection: the male statue is bent over in anguish with his gaze directed at the ground, while the female statue embodies the petrified grief for all victims of war. The faces sculpted into the two figures are those of Käthe and Karl Kollwitz. Their son's grave is located just a few yards away from the two sculptures.

The experience of losing her son turned Kollwitz into an adamant pacifist. She campaigned against war, and designed bills and placards with slogans like "Never again!" on a widely recognized poster from 1929.

All her efforts, however, seemed to be in vain. With Adolf Hitler's rise to power in Germany and the onset of World War II, which saw her grandson killed in action, her political engagement even got her in trouble. Kollwitz was threatened with being deported to a concentration camp despite the international level of prominence to which she had risen.

During the bombardment of Berlin, many of her drawings and prints were lost. With two weeks left until the end of the war, Kollwitz died in Moritzburg near Dresden at the age of 77.