The 57-year-old Swiss woman was found covered in a black sheet near a waterfall. Thai authorities have boosted security on the island of Phuket. 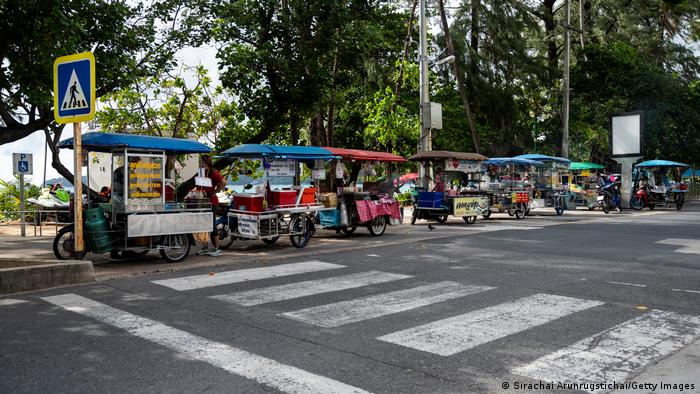 The authorities said they were reinforcing security on the island

Thai authorities are investigating the death of a 57-year-old Swiss national who was found near a waterfall on Phuket island, in what Thailand's Foreign Ministry described as a "murder."

But the police later said they were awaiting autopsy reports to determine the cause of death.

The woman, Nicole Sauvain-Weisskopf, was found partially clad lying facedown covered in a black sheet on Thursday, in the water among rocks on the resort island. An island resident found the body and alerted the police. She had reportedly been dead for several hours before being found.

"From what we saw at the scene, the body was covered with a black sheet, which suggests it was done by someone and she did not die of natural causes," said Phuket regional police commander Kitirath Phanpetch in a television interview. He said it appeared as if she had been dead for several days.

Swiss media reported the woman was a member of the diplomatic service. Switzerland's foreign ministry had received correspondence from Thai authorities about the death of Sauvain-Weisskopf. No personal details about the woman have been released yet.

Authorities have heightened security in Phuket.

Thailand had recently started allowing vaccinated tourists to popular destinations, after the travel sector had seen a setback due to pandemic restrictions.

The program to revive tourism, called Phuket's sandbox scheme, has resulted in 14,055 travelers visiting since July this year. American, British, Israeli, German and French tourists made up most of the visitors.

Critics have slammed the government for a slow vaccine rollout and insufficient prevention measures. There is also growing concern over the future of tourism, as officials roll out a new scheme to draw visitors.

Life after the tourist trade for Thailand's elephants

Most of Thailand's elephants live in captivity, offering rides and photo ops to tourists. But with the industry hit by the pandemic, some are now settling into a new life on a Chiang Mai nature reserve.