Thailand: Protesters keep up pressure on prime minister to quit

According to local media, three pro-democracy groups gathered in downtown Bangkok to demand reforms to education, politics and the monarchy. Protesters believe Prime Minister Prayuth has an illegitimate hold on power. 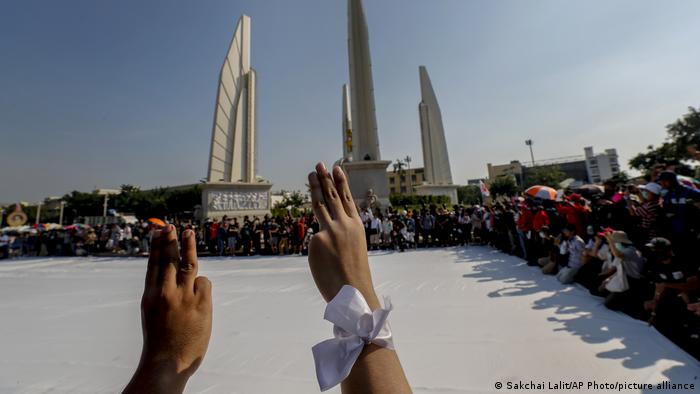 Thousands of people took to the streets of Bangkok on Saturday in anti-government protests that have been ongoing for several months.

Three pro-democracy groups gathered, according to the Bangkok Post, at the Democracy Monument in the Thai capital to repeat their demands for reforms.

The organizations — Bad Students, Free Women and Mob Fest — are all allied with the Free Youth group, which marked its first anniversary on Saturday.

Bad Students, mostly high schoolers who have been pressing for educational reform, besieged Thailand's Ministry of Education, with props designed to mock the government, shortly after midday, before joining up with the other groups.

The protests which began in July to demand the removal of Prime Minister Prayuth Chan-ocha, a former junta leader, have since manifested themselves to also call for reforms of Thailand’s powerful monarchy.

Activist Sombat Boonngamanong switched the attention back to the prime minister, though, as he told some 2,500 protesters gathered at Bangkok's landmark monument: "Not only is he incompetent, he also lacks legitimacy."

Sombat gave his speech, via loudspeakers, on the back of a truck wearing a pirate hat, mirroring the theme of mockery the protesters wanted to portray. "Thailand has not progressed because of Prayuth," Sombat told the crowd, who also put on songs and dances.

Police said they would not use violence to crack down on protesters, in stark contrast to last week, when thousands were met with water cannons when they marched to the Grand Palace to call for restraints on the monarchy's power.

Demonstrators have also been displaying their displeasure with Prayuth’s government as they believe the party has an unfair grip on power. The prime minister's parliamentary majority stems from the fact his junta picked the entire upper house before an election last year that opponents say was designed to keep him in power.

Meanwhile, just two kilometers from the protests, thousands of royalists gathered in yellow shirts and waved national flags as they waited to greet King Maha Vajiralongkorn, who was expected to attend the opening of a subway station.

Criticism of monarchy frowned upon

Protesters said they would turn their backs on the royal motorcade when it passed by.

Demonstrators have increasingly called for reforms to the monarchy, breaking a long-standing taboo against any criticism of the institution.

Showing disapproval of the monarchy can be punished with up to 15 years in jail under Thailand's lese majeste laws, yet it has not prevented citizens from doing so in recent weeks.