The incident is the second occasion in recent months in which police resorted to using water cannons on demonstrators. Recent protests in Thailand have called for government reforms and changes to the powerful monarchy. 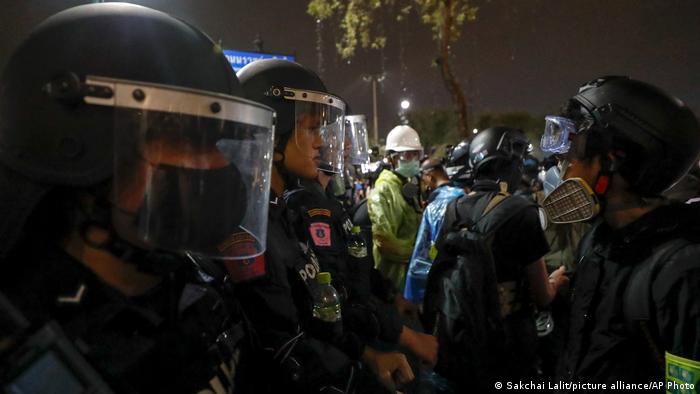 Pro-democracy protesters in Thailand were confronted with riot police and water cannons on Sunday as they attempted to deliver grievance letters to the Grand Palace in Bangkok.

The conflict was brief, and police later allowed the demonstrators to place four red mailboxes near the palace to allow protesters to deposit their letters.

Some 7,000 protesters took to the streets on Sunday, marching from Democracy Monument in central Bangkok to the palace, authorities said. 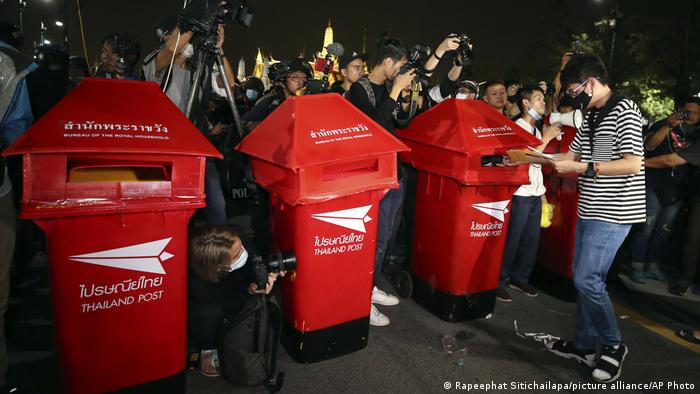 Police had unleashed water cannons when protesters pushed aside one of several buses serving as a barricade to the palace. For protesters and one police officer were hurt during the confrontation, according to the Bangkok authority's emergency unit.

Police spokesman Kissana Phatanacharoen said the water cannons were only fired as a warning. It was only the second time police used the cannons amid months protests.

The Grand Palace in Bangkok is home to royal offices but is only used infrequently by King Maha Vajiralongkorn.

The southeast Asian country has seen pro-democracy protests since July. The student-led movement has put enough pressure on the government to call for parliament to deal with at least some of their demands.

Protesters have taken to the streets on a daily basis to protest the country's monarchy and demand that Thailand's Prime Minister Prayuth Chan-ocha step down.

Protesters believe Prayuth lacks legitimacy because he came to power during an election in which the rules were set up by the military. Prayuth, a former army chief, led a 2014 coup that ousted an elected government and then headed a junta that ran the country until an election last year.

The junta also instituted a new constitution that the protesters deem to be illegitimate.

The movement's criticism of the monarchy is more controversial. A lese-majeste law mandates a prison term of up to 15 years for anyone who defames the king or his close family. Public criticism was virtually unheard of until the protests.

The protesters have demanded curbs on the king's powers and called for the monarchy to be more accountable.

"When the king truly cherishes democracy, all people will find happiness," the protesters said Sunday as part of a prepared statement. "When you hear all the flattering praise from the people, you must also hear fearless criticisms and suggestions all the same."

Anti-government rallies are being held almost daily in Thailand, with protesters demanding reforms and release of imprisoned activists. King Maha Vajiralongkorn has also come under criticism for his regime support.