With Thailand going through its worst pandemic wave to date, protesters in Bangkok defied COVID restrictions to call for Prime Minister Prayut Chan-O-Cha to step down. 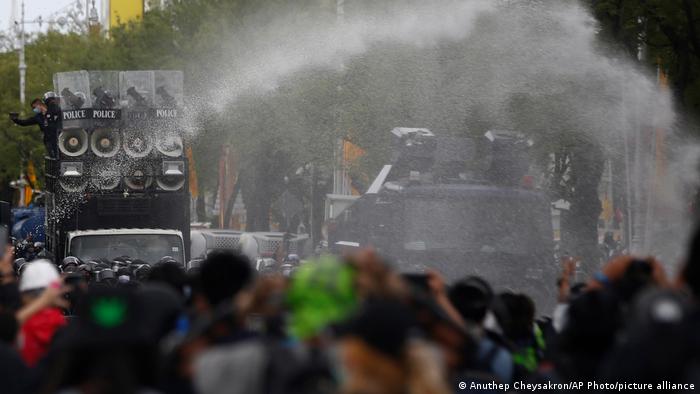 Thai police on Sunday used rubber bullets, tear gas and water cannon to disperse some 1,000 protesters calling for Premier Prayut Chan-O-Cha to step down over alleged mismanagement of the COVID-19 pandemic.

It was unclear how many were injured in the clash.

The protest came as the kingdom registers record levels of coronavirus infections, with hospitals under severe strain. 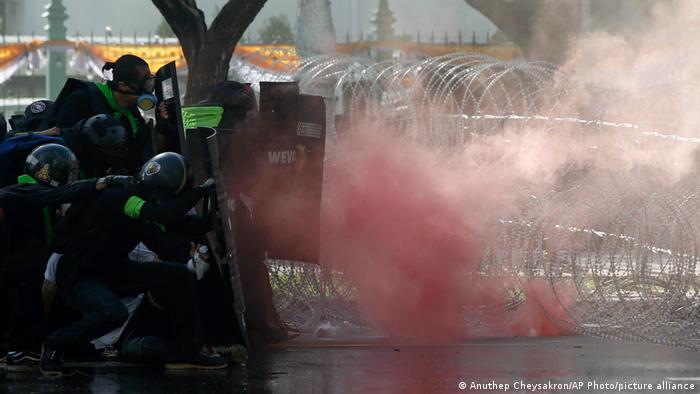 Police launched tear gas to break up the demonstration

What did the protesters want?

One protest organizer listed three demands: that Prayut resign, that the budget for the monarchy and army be cut, with the saved money to be used to fight the pandemic, and that an mRNA coronavirus vaccine be deployed.

The government has been slow to procure any vaccines, and the country's economy has been badly affected by the increasingly strict restrictions on the business sector.

Public dissatisfaction has grown after authorities this week reported that the Chinese-made Sinovac vaccine has failed to prevent hundreds of medical staff from contracting the virus. Sinovac was used for frontline workers in the country before the UK-developed AstraZeneca vaccine, which is locally produced, became available last month.

The government now says health workers will receive a booster shot of AstraZeneca in the hope that this will increase protection.

How did the protest movement start?

In July 2020, thousands of protesters gathered at the Democracy Monument in Bangkok, calling on Prayut to step down, for the constitution to be rewritten and for the monarchy to undergo reforms. In the Asian country, the royal family has long been considered above criticism. The authorities are known for wielding draconian lese majeste laws against their opponents.

The protests that started a year ago led to a wider movement in Thai society, with many now calling for rethinking the monarchy's role.

However, further protests have stalled amid police clampdowns on rallies and detentions of protest leaders. New waves of COVID-19 infections have also done their bit to discourage large protest gatherings.

The country's lese majeste law makes insulting or defaming the king, queen, heir and regent punishable by up to 15 years in prison. 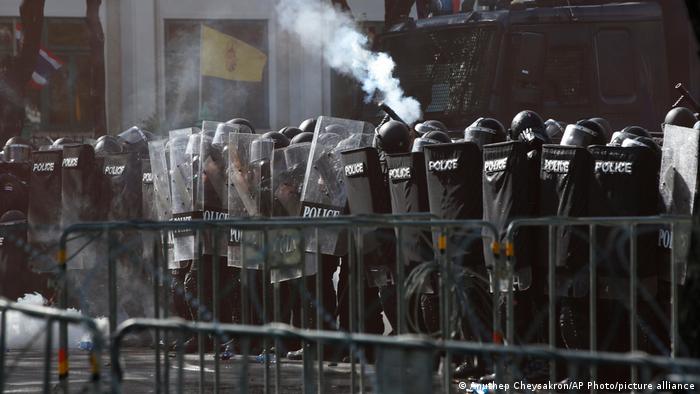 Police were out in force at the demonstraton

Who is PM Prayut?

Prayut, a former army chief, came to power in a 2014 coup that he masterminded.

As unelected prime minister, he headed the military junta that ruled Thailand from  2014 and 2019. He was then reelected as prime minister at 2019 held under an army-scripted constitution.

His government has been accused of suppressing press freedom and clamping down on dissent.

What is the coronavirus situation in Thailand?

The government on Friday imposed a new nationwide ban on public gatherings of more than five people. Violations can be punished with a maximum penalty of a two-year jail term or a fine of up to 40,000 baht (€1,035, $1,220), or both.

Sunday's protest took place in defiance of the new regulation.