Just 357 days after construction of the Shanghai factory began, the first electric sedans were presented to buyers. The rapid roll-out is of interest in Germany, where Tesla's first European Gigafactory will be built. 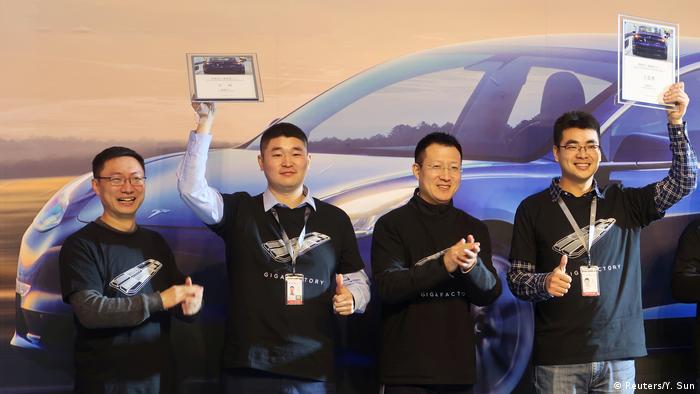 Tesla presented its first China-made Model 3 electric cars to buyers on Monday, less than a year after construction began on its first Gigafactory outside the United States.

Fifteen of the sedans were handed over at the facility near Shanghai to the US carmaker's employees —  one of whom proposed to his girlfriend after getting his new set of wheels.

Construction of Tesla's first China plant — Gigafactory 3 — only began in January and is the first completely foreign-owned car factory in the Asian country.

Earlier this month, the firm reportedly secured more than $1.4 billion in financing from Chinese banks to help fund further construction of the project and its China operations.

The $2 billion Gigafactory will eventually have the capacity to produce 500,000 cars per year, although initially, output will be much lower.

By starting production in China, Tesla can bypass high import duties on vehicles in the world's largest car market and compete with local electric manufacturers.

Output to be hiked next month

The US automaker said it would ramp up production in China before next month's Lunar New Year. Gigafactory 3 near Shanghai will produce battery cells, the Model 3 and Model Y vehicles

The opening of the Chinese plant is being closely watched in Germany, where Tesla announced last month plans to open its first European Gigafactory near Berlin.

Construction on Gigafactory 4 could begin as early as January after the firm reportedly reached a purchase price with owners for the land in Brandenburg state.

In its first phase, Tesla plans to produce the Model Y with an initial output of 250,000 vehicles.

A Los Angeles jury has cleared the tech entrepreneur of any liabilities. The plaintiff's lawyer described Musk as a "billionaire bully" who had upended the life of a man of modest means in the highly publicized row. (07.12.2019)