Ahead of snap elections in Greece, new warnings have surfaced of a "Grexit," that feared portmanteau suggesting Athens' departure from the eurozone. Syriza party head Tsipras, however, says there's "nothing to fear." 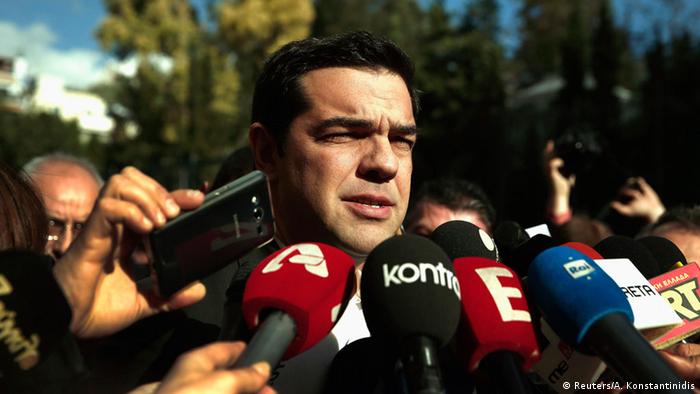 In an article published in the German business daily Handelsblatt on Wednesday, Alexis Tsipras said there was no reason for German taxpayers to worry if his anti-austerity party won the Greek snap election on January 25.

"On the contrary," he said. "It is not our goal for a confrontation with our partners … The aim is to stabilize the country, reach a balanced primary budget and end the bloodletting from German and Greek taxpayers," he wrote.

To attain that balanced budget, however, Tsipras did argue that the austerity measures imposed on Greece - in exchange for multiple tranches of EU/IMF loans - would have to be abolished. "Fiscal waterboarding," as he termed the conditions of the loan packages, would have to end immediately. He added, however, that Greece wouldn't have to exit the eurozone.

"Our goal is to reach a new agreement - within the euro - that would allow the Greek people to breathe," Tsipras concluded in Handelsblatt. 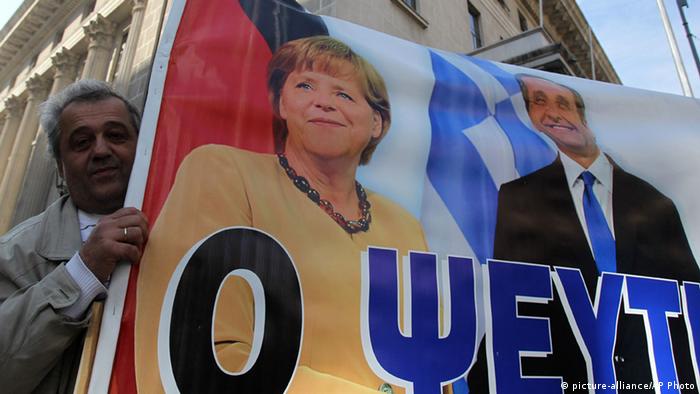 Anti-EU and anti-Merkel sentiment is broad among Greeks - 'The Liar,' reads this poster

"An accident could happen [in a standoff with Europe] and the whole idea is to avoid it," Hardouvelis said on Bloomberg TV. Samaras has repeatedly said Syriza's policies are tantamount to a debt default, which Hardouvelis told Bloomberg could cost Greece its "spot in the eurozone."

"This is not a bargaining chip on our side ... Europe has built defenses against a country leaving," he said.

With the latest 15-billion-euro ($17.6-billion) cap on treasury bills nearly exhausted, according to the Greek Finance Ministry, the upcoming election and Syriza's standing in the polls have reignited concerns among investors and EU leaders of a Greek exit.

For her part, German Chancellor Angela Merkel has played down the chances of it coming to that end, but she has also made clear she expects Athens to stick to the terms of its international loan packages.

Greece lacks a realistic plan for the future, says DW's Spiros Moskovou. Its current strategy seems to have its leaders swimming in limpid pools of wishful thinking, far removed from reality. (08.01.2015)