TATP - a substance from hell?

The Paris and Brussels terrorists used an explosive called TATP. It can be made from everyday chemicals anyone can buy at drugstores, do-it-yourself stores or online. 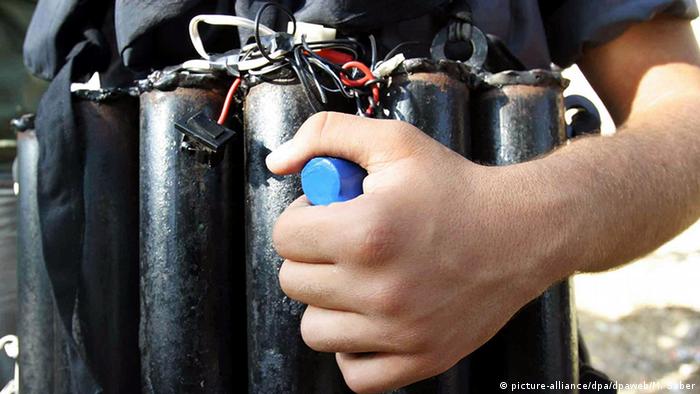 Let's clarify one thing, first of all. It is not true that just about anybody is capable of mixing up his or her own TATP in the kitchen at home. Also, just some manual uploaded from the internet or an instruction video is not sufficient to learn how to do it.

That's according to Thomas Klapötke, a Chemistry professor at the Ludwig-Maximilian University in Munich. "I doubt, that I could just hand the recipe to someone and that person then could brew the stuff together," the explosives expert says.

Even though Acetone peroxide, which is the chemical group to which TATP belongs, can be made out of commonly available chemicals it is quite difficult to handle. You need laboratory experience to process and mix up the different ingredients, because the brew is highly dangerous.

But terrorists can learn how to do it properly and there are, indeed, qualified experts among the terrorists - electrical technicians or chemists.

Professionals among the terrorists

For those people, preparing the explosives - as well as procuring them - is child's play, Wolfgang Spyra is convinced. The explosives expert teaches chemistry at the Technical University of Göttingen:

The German chemist Richard Wolffenstein discovered the highly explosive substance by accident in 1895. He was experimenting with acetone and hydrogen peroxide at the Technical University Berlin. And he registered the discovery and process as a patent with the number D.R.P 84953 in Germany.

TATP was not commercially viable - too dangerous

However, it did not take long to find out that the practical use of the invention was almost non-existent. The explosive was useless, because it was far too dangerous. The main disadvantage of TATP: The slightest bit of heat, the mildest shaking is enough of a trigger for the substance to blow up. The explosive is highly unstable and reacts violently to physical hits or friction.

Crystallization occurs at room temperature, if the material is being stored in a closed container. For the crystals it would be enough to open a screw-cap for them to detonate.

In other words: TATP is totally unpredictable and as sensitive as a raw egg. However, what makes TATP attractive to terrorists: It cannot be traced with common explosive detection devices.