Tatars fear ethnic conflict in Crimea | Europe | News and current affairs from around the continent | DW | 07.03.2014

As pro-Russia soldiers occupy towns across Crimea, leaders of the region's Tatar minority are mobilizing unarmed field patrols. Though they lack official authority, they hope to prevent inter-ethnic conflict. 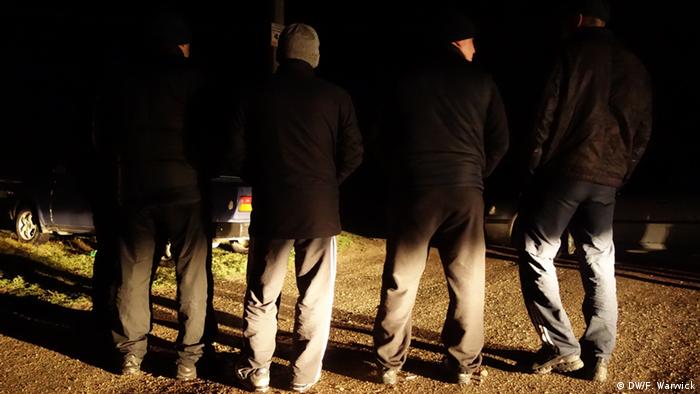 Crimean Tatars - whose ties to the region pre-dates Russia's 18th century conquest - say they distrust Moscow's intentions considering past history dating back to imperial times and more recently the 20th century when Crimean Tatars were deported to Central Asia.

Much attention has been focused on Crimea's main towns and cities which have strong Russian majorities. In the naval city of Sevastopol, public support for the Russian military remains high. It's a city that has ties to Russia's navy dating to the 18th century and Russia's Black Sea fleet recently renewed its lease here for at least the next 28 years.

The Cossacks are coming 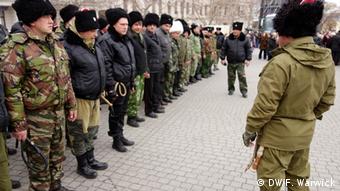 Earlier this week a detachment of uniformed Cossacks arrived from Russia's Krasnodar region. In a ceremony full of pomp and circumstance, their commander, a Colonel Sergei Savonin Yurievich announced that his unarmed troops had sworn to protect the city's population from unspecified threats.

"Sevastopolians, we will protect you. We will implement the task of preservation of public order," the colonel said as television cameras focused on his regiment standing at attention. "We are unarmed. We came by ourselves to help with our hands, legs and ears to stabilize the situation in this hero's city called Sevastopol. Citizens join us. It's our city. It's our task." 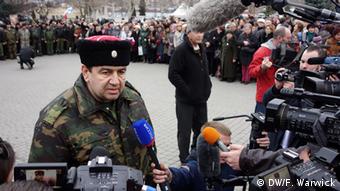 A crowd enthusiastically applauded chanting "Sevastopol is Crimea is Russia!"

It was a warm welcome for this carefully choreographed display of Crimea-Russia cooperation.

Outside the main cities

But just 50 kilometers north where Crimea's ethnic population is more mixed there's a different perspective. In the town of Bakhchisaray where Crimean Tatars number about a quarter of the population, townspeople look upon the arrival of Russian forces - which Moscow insists are militia independent of its command - with alarm.

"All the people living in Crimea understand that these are soldiers from the Russian Federation," said Enver Umerov, an ethnic Tatar elected to the city council. "They are occupying the territory the Crimea."

This former capital of the Crimean Tatar's Khanate was absorbed by Russia in 1783; it's known for its Ottoman-era architecture and ethnic and religious diversity. 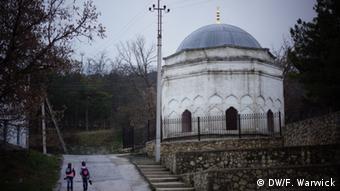 Crimean Tartars number about a quarter of the population

But in 1944 it was emptied of its ethnic Tatar population and it has only been in the last 25 years that these people were allowed to return from their exile in Central Asia. Many middle aged adults, including Umerov, were born in Soviet Uzbekistan and emigrated here in the 1980s and '90s.

The main fear many people in Crimea voice, is that that agent provocateurs working for pro-Russia nationalists or Kremlin security services, could launch attacks used to justify Russian military intervention.

Already Russian forces - wearing no insignias and refusing to identify themselves as such - are blockading Ukrainian military detachments in the town and that makes people uneasy.

Relations between ethnic Tatars and local Ukrainians and Russians have been good up till now, says Ahtem Chiygoz, head of the local Mejlis, the traditional council established for Crimean Tatars since they returned to this region from their exile in Central Asia. 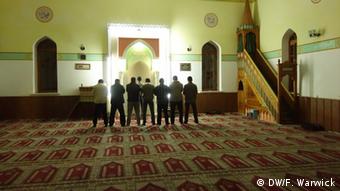 In 1944, Stalin emptied the peninsula of its ethnic Tartar population

"People of different nationalities who live here would never do such a thing it could only come from elsewhere," Chiygoz said. "We are expecting according to [Russian President Vladimir] Putin's plan, [that what could happen is that ] groups of people [posing as] Crimean Tatars [could start] attacking ethnic Russian families -or the opposite."

That's led to the hasty organization of night patrols and watch posts of unarmed men looking to prevent escalation or inter-ethnic conflict. After sunset, groups of men stand at crossroads and community halls, peering uneasily into the darkness.

At one such post, a dozen men are smoking furtively and chewing sunflower seeds. They aren't stopping cars, rather noting the comings and goings of unfamiliar vehicles and keeping in touch with each other by phone and text message.

"We have no authority to check documents, we can only call each other from the posts or call the head office to follow unknown vehicles or we can call the police," said Zamir Khaybulaev, 60, head of the local Mejlis. The Tartars only returned to Crimea from the 1970's onwards

At a second post, volunteer Ernest Bekirov is philosophical. He says Crimea's Tatars have weathered many hardships and said he hoped this crisis would pass soon.

A wish for peace

"We just want peace, happiness and to provide for our children and have a comfortable life in our native land," the soft-spoken 48 year old said. "We don't want a war - all this is coming from higher authorities."

These men are under no illusion that their unarmed patrols are any match for Russia-backed militias or regular soldiers.

But they say they're determined to prevent escalation that would cause this growing conflict between Russia and western powers over Ukraine to tear apart their small communities in Crimea.

And as Crimea's de facto authorities push for a referendum on independence for March 16 - just 10 days from the date of the announcement - there are fears that political tensions could shatter the communal peace that's held in this region since the Second World War.

US President Barack Obama has imposed a first round of sanctions on Russian officials such as freezing assets and issuing travel bans. It's a fine line of putting pressure on Russia while leaving room for diplomacy. (07.03.2014)

Europe has been acting unanimously when it comes to the crisis in Crimea. But DW's Bernd Riegert wonders if that will suffice to impress Russia or if giving in is the better way to go. (07.03.2014)

More than one third of Europe's gas needs are covered by Russian gas. The crisis in Ukraine has kindled fears that Russia could stop the flow. (07.03.2014)