President John Magufuli has taken the biggest majority since multi-party elections began in 1995. But this overwhelming victory has both the opposition and foreign observers suspicious. 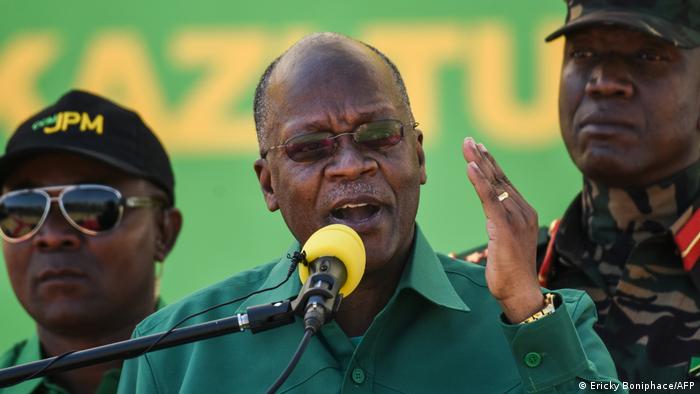 Tanzanian President John Magufuli won an election victory on Friday with 84% of the vote, according to the country's National Electoral Commission.

His rival, opposition leader Tundu Lissu, won only 13% of the vote.

"The commission declares John Magufuli of CCM (Chama Cha Mapinduzi) who garnered the majority of votes as the winner in the presidential seat..," said commission chairman Semistocles Kaijage.

The ruling Chama cha Mapinduzi party (CCM) has seized almost every key opposition stronghold, even those which have consistently held an opposition majority since 1995.

The election has been marred by internet blackouts, allegations of voter intimidation in opposition strongholds, and the casting of "prefilled" ballots.

The polls were being touted as a watershed moment for the country, faced with a choice between Magufuli's increasingly authoritarian rule, or preserving democracy.

President John Magufuli, who is seeking a second five-year term as leader of the East Africa country, has fashioned himself as a nationalist ruler, who is against foreign interference and is intolerant of dissent. 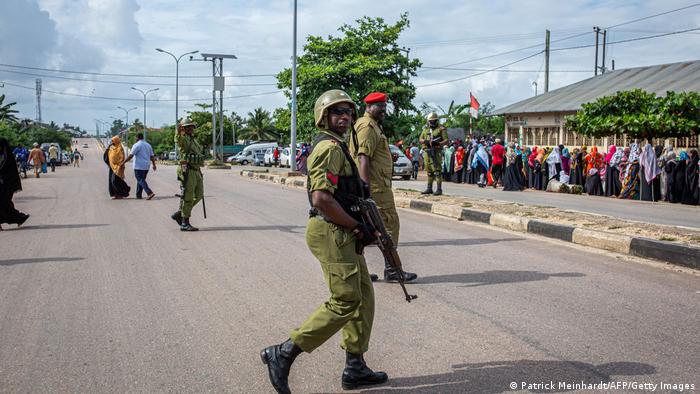 Read more: Opinion: Tanzania's 2020 election must reflect the will of the people

A staggering loss for Chadema

So results effectively wipe out the main opposition Chadema party in Tanzania's parliament.

According to Tanzanian analyst Jenerali Ulimwengu, this effectively makes Tanzania a "one-party state."

Chadema's presidential candidate and main rival of Magufuli, Tundu Lissu, says his party will not recognize the official election results.

"It is a fraud, an electoral fraud of a magnitude that is unprecedented in our entire history," he told reporters in Dar es Salaam. "The polling in many parts of the country took place under conditions that cannot be described as conditions for free, fair and credible elections."

However, according to Kenyan political analyst Martin Andati, the scale of Magufuli's victory is not surprising.

"Magufuli came in on the platform of fighting corruption  and empowering the masses, so he is still hugely popular," he told DW.

"The opposition was disjointed, but even if they were united they would not have won." 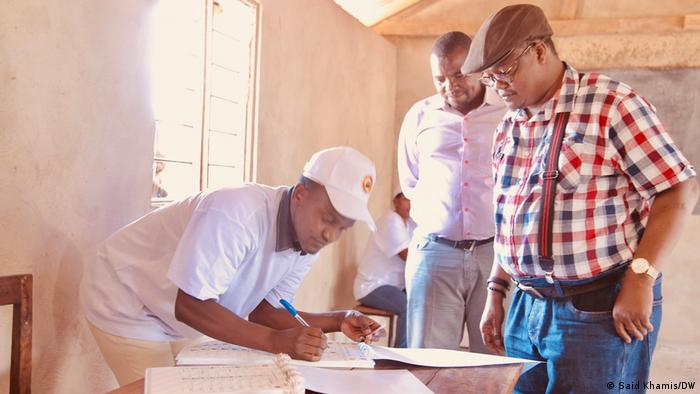 Presidential candidate Tundu Lissu casts his ballot. He has since called the election fraudulent

Andati also points out that Chadema's main leader, Tundu Lissu, was living in exile until recently, and despite being a popular figure, is no match for Magufuli's charisma. The ruling CCM's grassroots network and use of state resources to win over voters also played a part.

Thabit Jacob, a researcher at the Danish Institute for International Studies, says retaking opposition strongholds was a key goal for the CCM.

"For the last 5 years Magufuli has been saying he wants the CCM to regain all those opposition strongholds, by all means possible," he told DW. "And that's exactly what he has done."

On Zanzibar, the results declared so far also suggest a landslide victory for the CCM.

Zanzibar's ACT-Wazalendo party leader and presidential candidate, Seif Sharif Hamad, said his party would protest against the result. But shortly after taking to the streets, he and his fellow party officials were arrested before later being released. 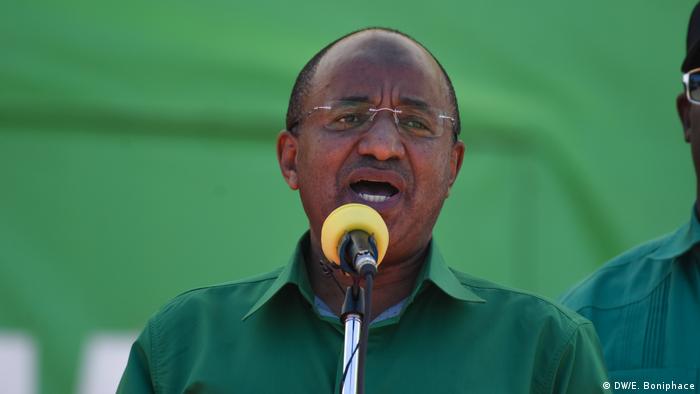 Dr. Hussein Ali Mwinyi of the CCM has won on Zanzibar with 76% of the vote, but his victory has not been accepted by the opposition

There was a strong military presence at polling stations across the Zanzibar archipelago. Reports from opposition strongholds described attacks on civilians. Over 10 people were reported dead following riots. Police, meanwhile, have denied their involvement.

Read more: No end to harassment of Tanzania opposition

Before his arrest, ACT party leader Hamad branded this year's election a military exercise rather than a civilian one.

"Historically, elections in Zanzibar are tightly contested," he explains. "But this time, CCM had a problem because their candidate [Ali Hassan Mwinyi] was very unpopular. He was not even born in Zanzibar, and would have lost quite clearly."

In a historical context, CCM winning the majority of the vote is "absolutely unthinkable," Jacob adds. 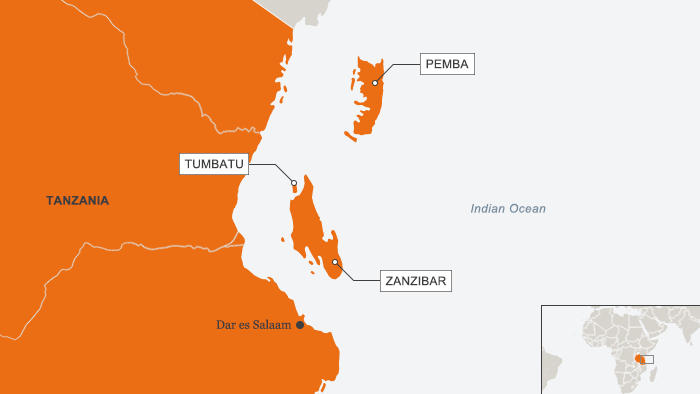 Tundu Lissu has meanwhile asked the international community to not recognize the result of the election.

"We are asking regional and international organizations that sent observers here, particularly the African Union (AU), not to confer any recognition to these illegitimate results," he said.

With preliminary election results already being bitterly contested, and widespread allegations of ballot stuffing, intimidation and fraud, hope for a reconciliatory way out is fading, according to Mzuri Issa, the head of Tanzania's Media Women Association (TAMWA) in Zanzibar.

"They have turned political matters into enmity and these elections in particular have been conducted very badly," she told DW.

"Therefore, there seems to be no room for reconciliation between the two rival parties, though common Zanzibaris would have liked to have it. If the international community would intervene, may be something would be achieved." 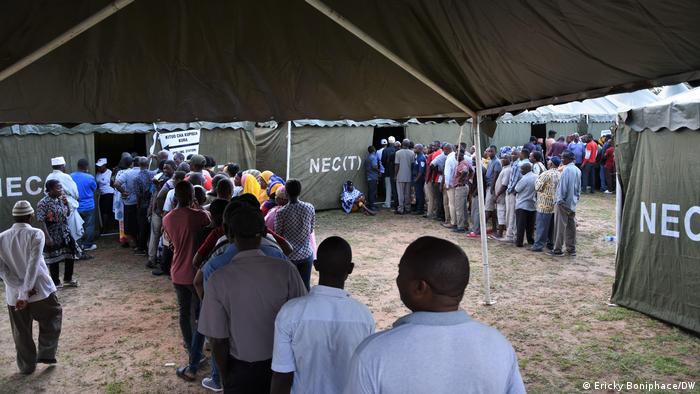 Analyst Martin Andati believes the international community will have to keep Magufuli and his party in check, as the Tanzanian opposition has proven itself incapable of doing so.

As for the future opposition, Andati says it's "not very good."

"They need to come together so they can agree on a joint candidate that gives them a semblance of unity. Otherwise they are going to be overrun."

'Magufuli is not bothered'

On Thursday, the United States embassy said there were "credible allegations of significant election-related fraud and intimidation," also citing allegations of multiple voting, pre-filling of ballots, the detention of candidates and protesters, restrictions on political parties' representatives to access polling stations and blocking of social media platforms.

But Jacob believes this is unlikely to change the outcome.

"Magufuli doesn't care about international legitimacy," he explains. "The opposition is hoping to put pressure on embassies and other foreign players. But Magufuli is not bothered by that."