In the nick of time for a national holiday, President Erdogan is cutting the ribbon on Istanbul's massive new airport. It could one day be the world's biggest, but there have been many losers in the construction process.

Departure times are already being displayed on flight information boards but not everything is ready for the launch of Turkey's new aviation hub called Istanbul Airport. A few steps away, much of the terminal is still a construction site.

Kadri Samsunlu is satisfied though. The head of Istanbul Grand Airport (IGA), the consortium in charge of constructing and operating the facility, outlines some key features of the megaproject. The first two runways (out of a total of six) are ready for use, as is the control tower, designed to look like a giant tulip.

He says 225,000 jobs will be created directly and indirectly through the airport by 2025, and that the project as a whole will contribute 5 percent to Turkey's GDP. "This facility is being built with Turkish capital, Turkish workers, Turkish banks and Turkish know-how — and this is pumping our self-esteem higher. Really, when I see this place ... we did it! That makes me very proud."

The groundbreaking ceremony for what is Istanbul's third airport took place in May 2015. In less than four years, Samsunlu and his team have apparently pulled off the colossal project to the north of Istanbul. Berlin can only dream of such things — 12 years after work started on the new airport for the German capital, there is still no reliable opening date.

In Istanbul the dimensions are gigantic. With a total area of 76 million square meters (818 square feet), the new Istanbul Airport is three times as big as Frankfurt Airport. It will immediately become the largest in Europe courtesy of an estimated 90 million passengers per year. And this is just the first of four planned expansion stages. In 10 years, up to 200 million passengers are expected to arrive and depart every year — more than anywhere else in the world. According to Samsunlu, €7.5 billion ($8.52 billion) has been spent so far.

The new airport is a pet project of Turkish President Recep Tayyip Erdogan, a symbol of Turkey's supposed status as a global economic power. Erdogan wants Istanbul to be one of the most important air hubs connecting Europe with Asia and the Arab world.

However, the Turkish economy is in crisis. The lira has plunged in value and inflation is soaring. Nonetheless, Erdogan insisted that the airport be ready for opening on October 29 — the 95th anniversary of the founding of the modern Turkish republic.

The high price of prestige

The success of the mega project has been far from absolute though. According to media reports, Turkish farmers had their lands taken from them for the purposes of construction while environmentalists have criticized the wholesale chopping down of huge forest areas.

Then there are the workers, who in trying to put the airport up in record time, say they faced dire conditions: fatal accidents, low safety standards and issues over pay. 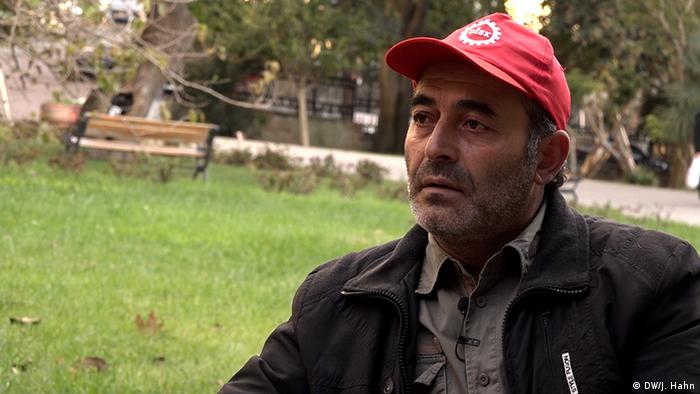 "They treated us like slaves," says Cemal Özder. He worked at the airport for nine months. "We often worked from 8 a.m. until 11 p.m., and some say they had to go through the night and still work the morning shift the next day."

Özder was fired when he publicly criticized the conditions, he says. He is currently involved with the Turkish trade union confederation DISK, which defends the rights of airport workers.

Since construction started in 2015, a total of around 35,000 workers have been on the job at one time or another. On-site safety and security was often inadequate says Özder. His union says that at least 38 workers have already died during the construction, while other sources report hundreds of deaths. The government and airport company admits to 30 victims.

However, by mid-September, thousands of workers at the airport had gone on strike. According to the trade unionists, the trigger was a bus accident in which 17 workers were seriously injured. Eyewitnesses claim some were even killed in the accident. The protests were broken up and up to 400 workers were detained, according to reports.

"Anyone who talks about the abuses is in danger of being jailed," says Özder. "This may be the largest airport in the world, but for me, the project is glued together with the blood of workers." 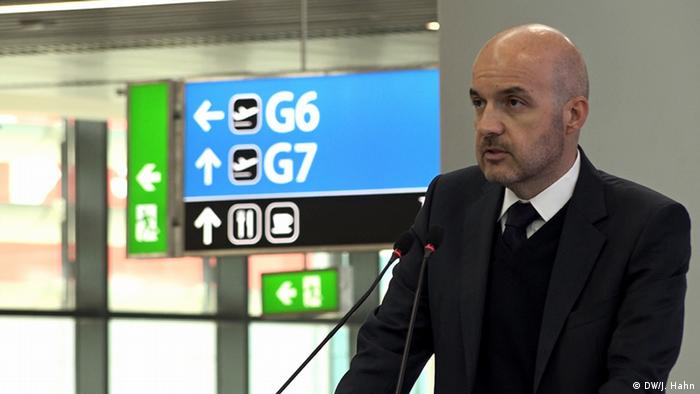 Kadri Samsunlu says the construction workers at the airport are "happy"

Samsunlu admits when pressed that there have been some problems during construction. But he says they have been fixed. "Workers demanded certain improvements for their needs. We took the necessary measures. I think we are providing a better service to them. And that's why from my perspective, the issue is under control and the workers are happy."

The airport boss says he is looking ahead and not back, because despite the official opening, there is still a lot of work to do. The large-scale move from Atatürk Airport in the west of the city will take place at the end of the year and the airport will not operate a full schedule of flights until January 2019. Until then, there is just one operation taking place at the airport, totaling five connections per day.

There is also no rail connection at the airport, something of an issue considering the new facility is 50 kilometers (31 miles) from the city center. A metro line is planned to be in operation from 2020.

Authorities found documents and cases with unknown liquids purported to belong to the defunct far-left Red Army Faction, dating back to the 1980s. Three members of the organization are still at large.

The Russian opposition leader who survived an attempted poisoning in August is set to head back to his homeland despite threats of arrest upon arrival.