As a huge corruption scandal rocks Turkey's ruling party, Ankara is pushing ahead with several northern Istanbul megaprojects tainted by corruption. Thousands of villagers are being evicted from their ancestral homes. 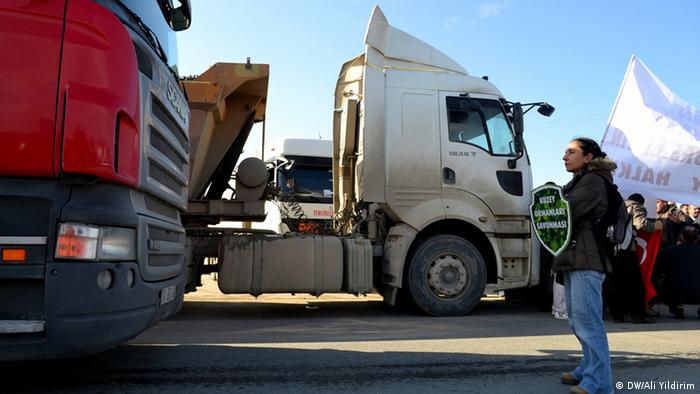 It was an offer too good to be true, but too tempting to refuse. When government officials first visited the home of Fatma Demircan in the summer of 2011, she was astounded by the small fortune they promised for her modest estate of 10 acres.

Located on a rural stretch of Black Sea coast north of Istanbul, Demircan's home lay at the epicenter of the state's new - and highly controversial - blueprint for a "New Istanbul." In her backyard, a $14 billion airport had been planned. A few kilometers away, a hulking third bridge was set to rise on Istanbul's Bosporus waterway, while state officials spoke of a 'crazy project' - a colossal 44-kilometer (27 miles) shipping canal to be built in parallel to the winding Bosporus.

"Officials promised us, 'everybody will benefit from these projects. You'll be well compensated when we buy your land,'" the 34-year-old mother of three recalls.

Four years later, however, Demircan's family is instead being evicted from their home. As land clearance begins for the city's new airport and the piers of Istanbul's third Bosporus bridge slowly rise, hundreds of villagers learned in late January that the state had instituted a sweeping eminent domain law to buy up their lands for prices well under market value.

"I had no idea what 'eminent domain' even was," Demircan told DW. "We weren't even sure we wanted to sell our land, much less that we'd have to." A state mandate will see Demircan's property sold later this year at a price of nine euros per square meter, roughly a tenth of the 80-90 euros per square meter local realtors say is the going rate. 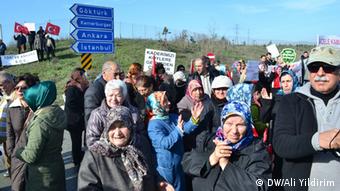 The investigation saw three government ministers resign, among them former public housing director and Urbanization Minister Erdogan Bayraktar. Bayraktar hinted at corruption in the country's construction sector after his resignation, calling on the prime minister himself to resign over a series of murky public housing deals.

"The majority of construction plans in the current investigation were carried out with the approval of the prime minister," he said. Several construction executives associated with the third bridge and airport were also arrested in the scandal.

Anger over official corruption and mass evictions saw villagers from the northern Istanbul towns of Yenikoy and Agacli organize a demonstration this week, turning an intersection between the two towns into an unlikely protest venue. "Will Istanbul be a better place without the buffalo milk or the eggs that come from our farms?" asked Huseyin Colakoglu, a farmer from Agacli. 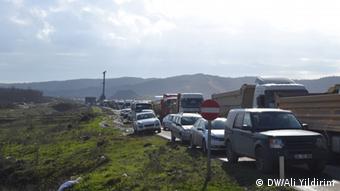 For several hours protesters blocked dozens of trucks on their way to the third airport construction site. "Everywhere is Agacli, everywhere is resistance!" chanted Elif Yucel as she sat defiantly on the highway pavement, a queue of trucks idling before her. "We don't want another place, what we have is enough. It's our right to stay," said one of Yucel's companions.

In Agacli, anger has been fueled by news that village lands are not being redeveloped to make way for the airport, but rather for a luxury housing development. "We've tried to contact anybody in the government to know why people are being evicted for this sort of thing. But nobody has given a single response," said Ali Yildirim, the head of an environmental group dedicated to protecting the region's forests.

Hope that Turkey's corruption investigation may expose wrongdoing in northern Istanbul has meanwhile begun to fade. Prime Minister Erdogan has increasingly brought the investigation under heel, blocking a second wave of arrests and sacking thousands of police and prosecutors.

Erdogan has also publicly denounced the investigation as a "dirty coup attempt" against his rule. He accuses the religious movement of Fetullah Gulen, an influential Islamic preacher at odds with Erdogan, of using its followers in the police and judiciary to launch the investigation.

"In this polarized climate, it's become impossible to talk about what's happening to regular people or our environment," said environmentalist Yildirim. Development projects have become particularly polarizing subjects of debate since the summer of 2013, when the planned demolition of a central Istanbul park sparked mass protests in Turkey's major cities. 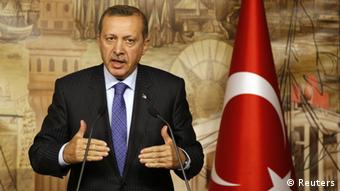 Erdogan is beleaguered by corruption allegations

Much to the puzzlement of foreign observers, Erdogan suggested that those protests were instigated by an opaque alliance of European powers. The reason, he said, was "discomfort" over the new airport and Turkey's growing economic clout.

Against those accusations, Yildirim says few have weighed the broader costs of the airport. "You're cutting down 2.5 million trees, you're making Istanbul a place without green, a city without end." By 2020, the city is expected to grow from 14 million to over 16 million, which would make it Europe's largest.

But despite that astonishing number, dispossessed homeowner Demircan is unsure if her family will have a place here. "We've lived in this house for four generations, and now we have to leave," she said. "With this tiny sum of money we're getting, where will we even go?"

The position of Turkish Prime Minister Recep Tayyip Erdogan is not as secure as it once was. Political rivals have undermined his status, but now, he has taken the bull by the horns, says DW's Baha Güngör. (09.01.2014)

The government in Ankara has reportedly dismissed 350 police force members overnight. This follows a corruption probe targeting key allies of Prime Minister Recep Tayyip Erdogan, who has labeled this "a plot". (07.01.2014)