Turkey detains hundreds of airport construction workers in Istanbul | Europe | News and current affairs from around the continent | DW | 15.09.2018

Police in Turkey have rounded up hundreds of construction workers at Istanbul's new airport after they protested labor safety, bed bugs in their accommodations, delayed salaries and colleagues' deaths. 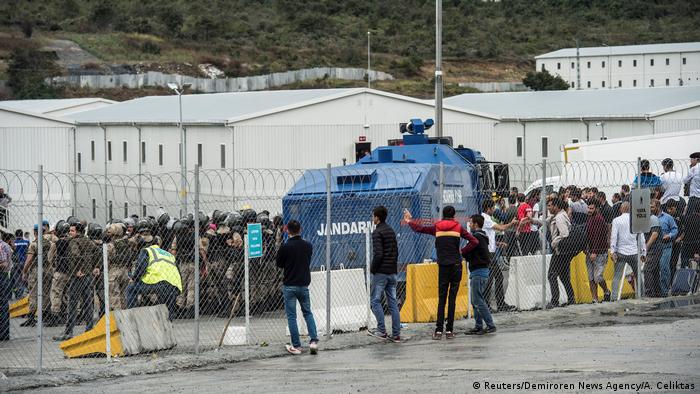 Turkish gendarmerie officers detained around 500 laborers on Saturday after they staged a protest over working conditions at Istanbul's new airport, according to a union leader and newspaper reports.

The protest was triggered after 17 workers were injured in a shuttle bus accident on Friday. Thousands of workers joined the demonstration which was broken up by riot police who deployed tear gas and water cannon, reported Turkey's Cumhuriyet newspaper.

Opposition lawmaker Ali Bayar, who visited the site after the protests, said the rows of container homes where the workers are housed "look like a detention camp." The laborers have also complained about poor food, bed bugs in their sleeping quarters, delayed salaries and colleagues' deaths.

In February, the Labor Ministry in Turkey, an EU candidate country, said 27 workers had died at the airport since the start of work there in 2015, mainly from work accidents or health problems.

Unions have long complained about poor working conditions at the airport - a prestige project for President Recep Tayyip Erdogan - but workers' right to protest had been curtailed under a state of emergency introduced after the July 2016 coup attempt. The measures were lifted in July. Turkey-EU relations have been strained by the Ankara government's power grab following the failed coup.

Airport operator IGA said its CEO had met union representatives and was looking into their complaints. Ozgur Karabulut, general manager of the Dev Yapi-Is union, said the union had received only verbal pledges from IGA and wanted commitments in writing.

"Most of them had to go to work today under pressure and under threat," Karabulut said. "So they went to work today unwillingly but they want the public to know that they will be protesting tonight if their friends are not released."

The yet-unnamed airport, Istanbul's third, is scheduled to open on October 29 and is part of a construction boom in Turkey overseen by Erdogan and supported by public contracts for bridges, roads and railways and the promise of quick money from investors, especially those based in Arab countries.