Taiwan reinstated its death penalty last year, but an erroneous execution has reinvigorated the surrounding debate. Still, the country's population remains largely in favor of that form of punishment. 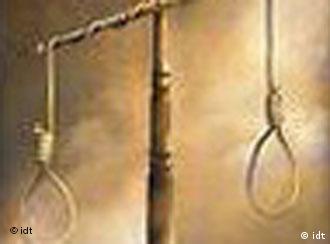 The death penalty is at a tipping point in Taiwan

In more than two-thirds of the world's countries, the death penalty has been abolished either formally or in practice. But in Taiwan, the government reinstated capital punishment last year.

The move was a popular one, and polls show two-thirds of Taiwanese support capital punishment - which had been subject to a four-year moratorium - as a deterrent to violent crime. Nine prisoners have since been executed.

Deutsche Welle met with one death penalty supporter in Taipei. Chou Chang-chan's son was just 32 years old when he was strangled and stabbed in an attempted robbery. Last year two men were sentenced to death for the crime. It's the only form of punishment that Chang-chan and her ailing husband are willing to accept.

"We're in our 80s now," she said. "We don't know when we'll die but we're only willing to go once we've seen the execution. The government should return justice to our family." 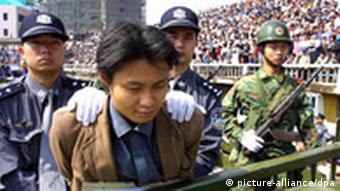 The island's stance is in line with that of many of its neighbors. China, Japan, North Korea, Singapore, Malaysia and Vietnam all carried out executions last year, according to human rights watchdog Amnesty International.

But this year, the government admitted an innocent man was executed, reinvigorating the debate about the death penalty.

Chiang Kuo-ching, a soldier, was put to death for raping and murdering a young girl. However, he always contended he was forced to confess during a brutal interrogation by authorities. The government's admission of its mistake included President Ma Ying-jeou on national television bowing three times before Chiang's image, and apologizing to the dead man's mother.

Despite the fatal blunder, the Taiwanese government says it's just following the wishes of its constituents. According to Justice Minister Tseng Yung-Fu, severe punishment serves a purpose.

"There's a belief in the concept of karma, that what goes around comes around," he said. "The reality is, unless those who commit serious, irrational crimes are severely punished, people won't feel at ease."

But Lin Hsin-yi, executive director of the Taiwan Association to End the Death Penalty, rejects the idea that traditional beliefs are an obstacle to abolishing capital punishment. 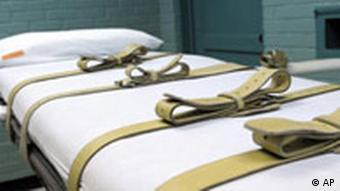 "Every country has a history of using draconian laws, including the death penalty," she told Deutsche Welle. "But over time we've realized that it doesn't stop people from committing crime, and it doesn't benefit society. I know that there are lots of problems we need to solve in the process. But, in the meantime, we call on the government to stop carrying out executions."

Taiwanese lawyer Wellington Koo represents a man who, along with several others, was accused of kidnapping a child. He says torture played a role in the men's confessions.

"When they were arrested, they made a confession," he told Deutsche Welle. "But during further investigation, it was found that this was extracted through torture."

Meanwhile, other cases currently before Taiwan's courts also contain controversial evidence, and the country's continued use of the death penalty has drawn criticism from some in the international community.

A majority of nation states have either formally done away with the death penalty or not carried out an execution in ten years. Only five developed countries – including the United States – retain capital punishment. The European Union bans its use in all cases, and is an advocate for abolition. 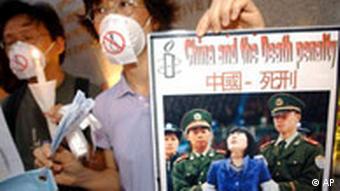 The death penalty has ardent opponents

EU high representative Catherine Ashton warned Taiwan that any miscarriage of justice would be irreversible.

But Justice Minister Tseng Yung-fu is keen to assure critics that all death penalty cases will be subject to a rigorous set of checks. And, he says, the ultimate goal is to do away with capital punishment.

"We're doing research, looking at what measures we need to take in order to help the public accept abolishing the death penalty," he said.

The German government has taken up the issue of the death row convict with India. A Law in Germany prohibits the deportation or extradition of individuals to countries where they could be given a death sentence. (17.06.2011)

A press report says that the German government has been limiting the flow of intelligence to the CIA following the killing of a German citizen by a US drone. Critics say it is just covering its back. (17.05.2011)

Germany calls for stay of execution in Bahrain

The German government says the death sentence imposed by Bahrain on four Shiite men found guilty of killing two policemen at a protest in March is "draconian." Berlin has urged a stay of execution. (29.04.2011)