Taiwan's passport cover has a new look, as Taiwanese travelers have been mistakenly subjected to the same travel restrictions as citizens of mainland China. Taiwan's official name is the "Republic of China." 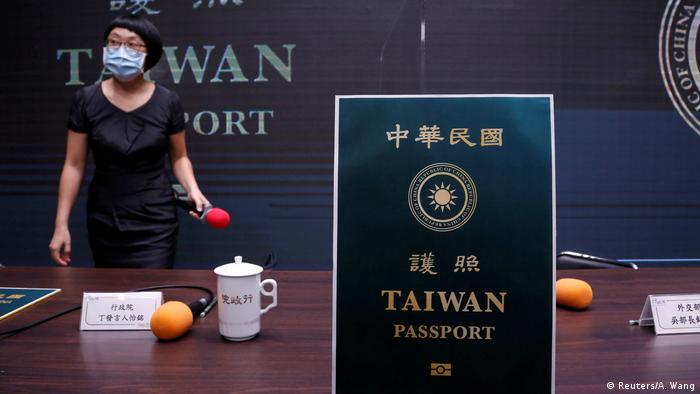 Taiwan on Wednesday introduced a redesigned passport cover to avoid confusion with passports from mainland China.

Taiwan's Foreign Ministry said the passport's design has confused countries into imposing the same coronavirus-related travel restrictions on Taiwanese travelers as on Chinese citizens.  Despite its proximity to mainland China, Taiwan has widely contained the virus and has a far lower number of infections.

The new passport design enlarges the word "Taiwan" and features "Republic of China" only in Mandarin characters. The new passports are expected to be issued starting in January.

What is in a name?

Taiwan's foreign minister, Joseph Wu, told reporters that since the outbreak of the coronavirus pandemic, Taiwanese have "kept hoping that we can give more prominence to Taiwan's visibility, avoiding people mistakenly thinking they are from China."

China's official name is the "People's Republic of China."

In July, Taiwanese lawmakers also demanded that Taiwan's flagship airline, "China Airlines," be renamed, or redesigned with Taiwanese symbols, to avoid being confused with a Chinese airline.

Beijing has always insisted that self-ruled, democratic Taiwan and mainland China are part of the same country, of which only the Communist Party of China is the sole legitimate ruler.