Countless cultural assets were destroyed by the Syrian Civil War. The Syrian Heritage Archive Project in Berlin contributes to preserving their memory with an exhibition showing what has been lost — and what remains.

There's a clear blue sky on Issam Hajjar's photo of Aleppo's famous Umayyad Mosque from 2011. "It was a clear January day and I was on my way to the old town to take pictures," the Syrian photographer recalls. The photograph shows the inner courtyard of the mosque bustling with people, the impressive minaret of the prayer house in the background.

Issam Hajjar has taken countless such pictures of buildings and archaeological sites, but also of daily life in the province. His photos are of great value today, as they preserve the memory of a country that no longer exists.

In some locations, there are only bombed-out ruins left. Different world heritage sites have been badly damaged or completely destroyed — such as the minaret of the Umayyad Mosque, which collapsed in April 2013 after heavy fighting in the city.

The photographer, who now lives in Berlin, has therefore donated some of these images to the "Syrian Heritage Archive Project," conducted in cooperation with the Museum of Islamic Art in Berlin and the German Archaeological Institute.

Since 2013, German and Syrian researchers have been collecting photographs, films and reports documenting Syria's cultural and natural treasures before digitizing them to create an archive. From old photos to archaeological research, all is systematically recorded and sorted. 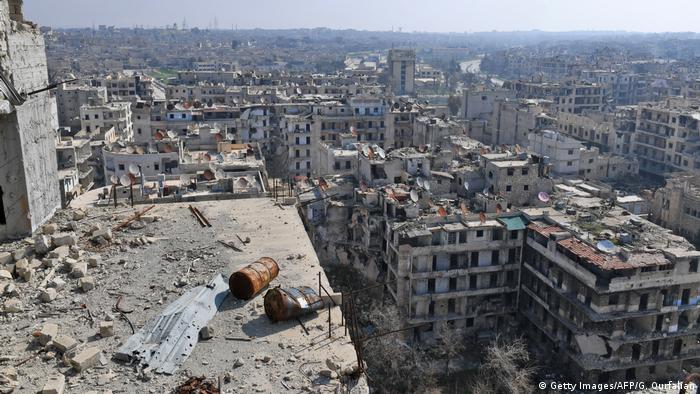 "Over the past six years, we have collected an incredible volume of data," says Professor Stefan Weber of the Museum of Islamic Art in Berlin, who initiated the project six years ago. Around 340,000 documents have now been collected. It is the most comprehensive archive on Syria outside the country. "This is a unique treasure."

A selection of this archive is now on show at Berlin's Pergamon Museum, in the exhibition "The Cultural Landscape of Syria: Preservation and Archiving in Times of War."

The show is organized in five different sections, covering the old towns of Damascus and Aleppo, Palmyra and Raqqa, as well as the so-called Dead Cities — abandoned settlements from the late Roman and early Byzantine times.

Pairs of photographs showing a same location before and after the Syrian Civil War are particularly moving. A lively ancient bazaar street in Aleppo, for example, is reduced to a pile of rubble in the accompanying picture.

Nevertheless, the emphasis of the exhibition is not material losses; it rather shows what Syria still possesses — an outstanding, millennia-old cultural heritage. 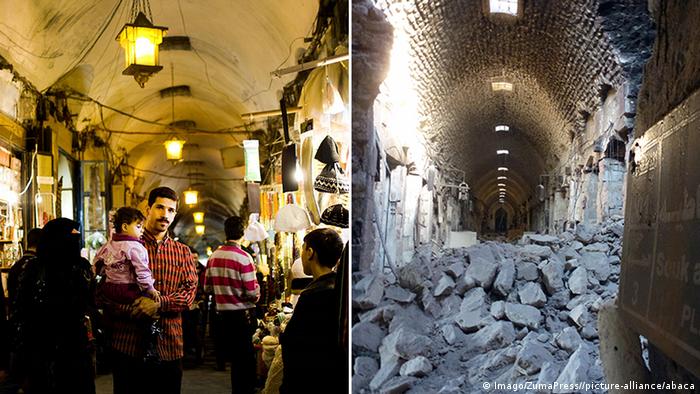 Before and after: The ancient Aleppo Bazaar symbolizes the destruction wrought during the Syrian civil war

A template for reconstruction

"It's also about making that clear to the Syrians themselves," says Karin Pütt, who coordinates the Syrian Heritage Archive Project. It's a country that was and still is more than a devastating civil war, which will hopefully manage at some point to revive its past. That's another goal of the archive: to provide information to reconstruct the country when the war ends.

Photographer Issam Hajjar has also been involved in the Syrian Heritage Archive Project since 2015. That hasn't always been easy for him.

"A whole package of memories" are associated with the images from his home country, he says. But that doesn't stop him from contributing to the digital archive in Berlin: "To show Syria's diversity is a life mission for me."

The exhibition "The Cultural Landscape of Syria: Preservation and Archiving in Times of War" is on show until May 26, 2019.

Out of brutality, beauty: The Syrian Expat Philharmonic Orchestra

Born out of the catastrophe in Syria, but not overshadowed by it: a diaspora of musicians in European countries has found a new homeland in music. The orchestra's founder and artistic director Raed Jazbeh explains how. (29.10.2018)

A donor conference in Paris committed millions to the protection of cultural heritage sites after meeting in the wake of the destruction of ancient Palmyra, Syria by IS. (21.03.2017)