Out of brutality, beauty: The Syrian Expat Philharmonic Orchestra

Born out of the catastrophe in Syria, but not overshadowed by it: a diaspora of musicians in European countries has found a new homeland in music. The orchestra's founder and artistic director Raed Jazbeh explains how. 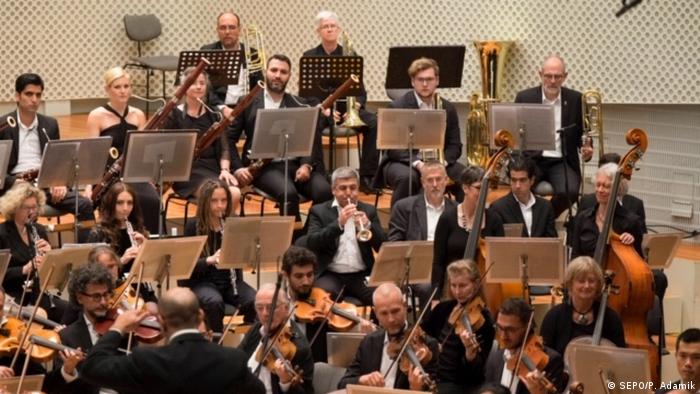 DW: How did the orchestra come to be founded?

Raed Jazbeh: I worked on music projects for youth, amateurs and professionals in Syria beginning in 2007. When I arrived in Germany in 2013, I started several projects for Syrian music with German orchestras. Then I had the idea of initiating an orchestra for professional Syrian musicians living in Europe, particularly as an outlet for Syrian symphonic music. I started to contact friends whom I had studied with in Damascus, and after ten months of hard work we gave our first concert performance in September 2015 in Bremen.

With the members living in various countries, how much time can you spend together?

Travel in the EU is easy because you don't need a visa. We generally get together for three days of rehearsals somewhere in Europe, from morning to evening, with one or two concerts on the fourth day. 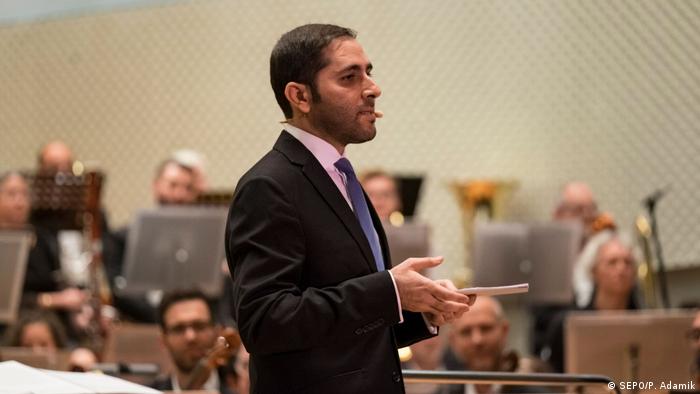 But how often can you actually meet?

We have no funding, so don't have a budget that would allow us to set our own schedule. We perform by invitation only, with the host covering costs for travel, accommodations, the hall rental and everything else. We try to meet every few months – also to renew our programs. Some of the pieces in our upcoming concert in Hamburg we have played before, others are new.

I presume the musicians didn't leave Syria by choice, but instead in reaction to the country's physical and cultural destruction. Do you consider the Syrian Expat Philharmonic a permanent institution, or could you imagine it ideally being a temporary solution that would be no longer needed if Syria were restored in peace and rebuilt?

That's an important question. We are and will remain an orchestra of Syrians living in Europe. If the war came to an end – and I hope it will soon – the institution would continue, even if some of the musicians decided to return to Syria. So our existence doesn't depend on whatever happens there from here on.

Does the orchestra sometimes take a stand on topical events, or is it apolitical? 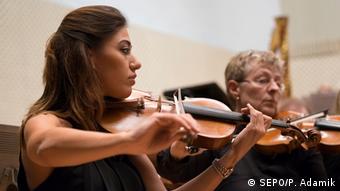 Every member has his or her own point of view on politics, religion or anything else. But as an orchestral project, our only ideology is an general stance against war, wherever it may be. Of course we would like to have a better life, and maybe this music gives some hope.

I'm also curious about the current status of creative activity in Syria. Do you work with Syrian-based composers?

We would perform music by composers currently living in Syria if we knew of any, but all of the country's composers we are aquainted with presently are living in exile. We would very much like to work with arrangers who are preserving the country's musical heritage though.

So what kind of music do you play?

Two categories: first, music written for symphony orchestra. But secondly, most of what we play are compositions based on traditional motifs or musical elements, then transformed by the composer into a symphonic format. Sometimes we do play mainstream classical music however.

Do your programs artistically express the conditions in your home country or the situation of its people, or is this simply art for art's sake?

Of course, some composers create works that express these difficult times. Others do not. We perform, simply, music. Our programs are not based on sending a message. Just sharing beauty. 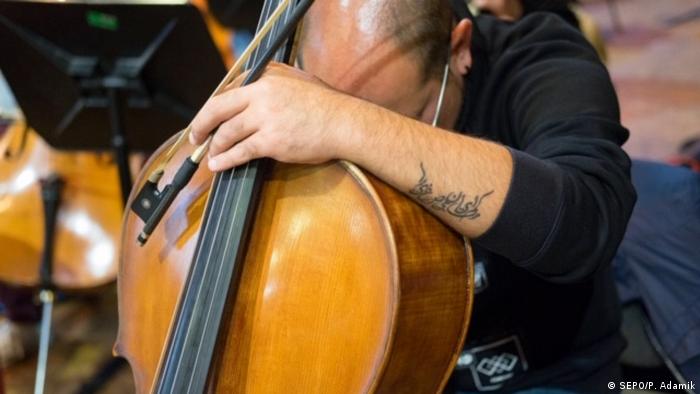 Amidst a busy schedule, an inward-looking moment

And how do audiences react?

Amazing: We are surprised at how clearly audiences in Germany and Europe understand the images in the music. Even the oriental melodies and motifs. Sometimes they are moved to tears. After the concerts, people will want to discuss what they have perceived in the music with us. So music truly is an international language. Anyone can understand it. I think Europeans are very open to new cultural impressions, and they understand them very well.

Syrian musician Raed Jazbeh founded the Syrian Expat Philharmonic Orchestra (SEPO) in 2015. Its rougly 75 musicians perform on traditional orchestral instruments – strings, woodwinds, brass, percussion – occasionally supplemented by instruments from Middle Eastern traditions. In the three years of the orchestra's existence, it has performed extensively throughout Europe. DW's Rick Fulker conversed with its founder just ahead of a performance in Hamburg's Elbphilharmonie on October 29.

Far from the Syrian frontline, expats get creative

A secret network of some 500 Syrian activists is attempting to unite an opposition scattered around the world. Despite some challenges, the group has become a powerful tool to coordinate protests in Syria. (01.03.2012)

Jailed for his activism in Syria, the rapper Abu Hajar and his band Mazzaj Rap are pursuing their fight for justice in Berlin. They've found freedom of expression in the city - but also face humiliation as refugees. (11.04.2016)