The main opposition High Negotiations Committee says it is pulling out of formal mediation citing a worsening situation in Syria. Assad's regime has been accused of more than 2,000 violations since the end of February. 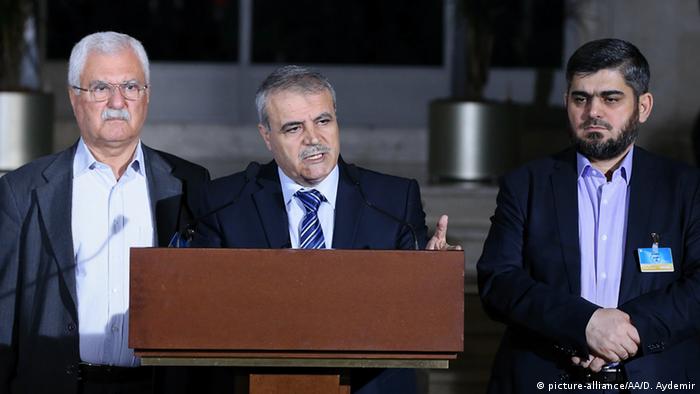 The latest interruption to the on-off peace talks, brokered by the United Nations, follows worsening violence in northern Syria - especially around Aleppo - where a seven-week-old ceasefire has effectively collapsed.

The team would "remain in Geneva ready to engage in serious talks," Meslet added.

But earlier the group said it was "unacceptable" for negotiations to continue while President Bashar al-Assad's government continued to "bombard and starve civilians," claiming that regime truce violations in the north numbered more than 2,000.

The opposition says government forces carried out 70 air raids Sunday in northern Syria, with support and weapons from Iran and Russia.

United Nations envoy for Syria, Staffan de Mistura, insisted the ongoing round of indirect discussions, which began on April 13, would continue through the week as planned, and that the HNC would remain at their hotel in Geneva.

But the suspension has dealt a clear blow to already unpredictable talks, aimed at achieving a political transition, including presidential and parliamentary elections by September 2017.

The talks have been designed to allow UN mediators to meet separately with the HNC and Assad's representatives.

The opposition continues to insist there be no role for Assad in any transitional government, while Assad's envoys have proposed a "broad-based government."

US President Barack Obama and Russian President Vladimir Putin vowed to help strengthen the ceasefire in a phone call with each other Monday, according to the Kremlin.

Both leaders had stressed the "significance" of the Geneva talks and agreed that their security services and defense ministries would ramp up cooperation over Syria, it said.

Hours before the suspension of talks, Syrian opposition rebels - who control large areas of the north - launched a new offensive against regime forces.

They accused the government of breaking the ceasefire to try to recapture Aleppo.

The al-Qaeda-linked "Nusra Front" operates in the area but, along with the "Islamic State" (IS) militant group, is not included in the peace talks.

Syrian government forces have clashed with Islamist rebels near the city of Aleppo on two fronts. The uptick in violence comes as talks over a fragile truce continue in Switzerland and thousands flee the bloodshed. (15.04.2016)

'We'll see if there's a chance for a peaceful solution'

President Bashar al-Assad says he would like to include the opposition in Syria's postwar government. Professor Günter Meyer of Mainz University says this makes a breakthrough almost appear possible. (02.04.2016)