A year after Syrian Kurds took over their areas, the region is experiencing unprecedented violence as al-Qaeda affiliates try to take over. DW spoke to the co-leaders of the main party of Syria's biggest minority. 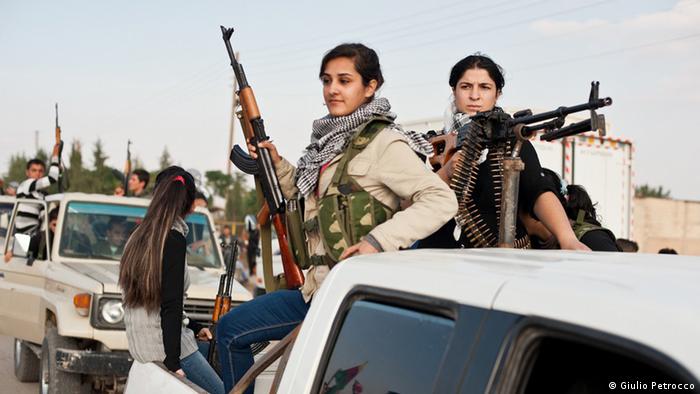 DW: From the beginning of the uprising in March 2011, Syria's Kurds vowed a "third way" - neither with Assad, nor with the insurgents. What is your assessment at this point?

Asia Abdullah: In July 2012 we managed to take control of our areas but today we have clashes mainly with Jabat al Nusra and other al-Qaeda affiliates but our defence committees are succeeding in pushing them out. It's a difficult situation since Turkey blocks our northern border, Jabat al Nusra prevents us from having trade relations with the rest of Syria and the Iraqi Kurdistan region has also closed the border. Our stake from the very beginning was that of a peaceful revolution and we've remained in a self-defence position ever since. We already suffered under Assad's regime for decades so no Kurd from Syria is prepared to allow anyone else to interfere in our own decisions. However, the Syrian conflict is not military but a political one that will only be settled when all the foreign agents involved wish so.

There's a lot of speculation over whether you'll declare your own autonomous region in the short term.

AA: We are not willing to break with Syria but just looking for a temporary civil administration to meet the most urgent demands of our people. And I want to underline that it's a temporary solution because we don't know what the scenario will be in Syria in a year or two. We cannot rely on hopes for the future so we have to do something on the ground for our people right now.

PKK fighters are said to be heading for Syria after pulling out of Turkey. Is there any truth to that?

AA: Those are just rumors from sectors who want to blow up both the peace process between Ankara and the PKK and the revolution of the Syrian Kurds. We already have our own popular defence committees, the YPG, and they are proving that they are capable of defending our territory. They are defending the Syrian Kurdish people as a whole and they should be our armed forces when we have a government of our own.

Women seem to be playing an increasingly important role in the Kurdish revolution. Could you explain this aspect?

AA: We are fuelling two simultaneous revolutions: that of our nation and that of women. All of our organizations, social, political military etc, are built up on quotas of 40 percent for women, another 40 percent for men and 20 percent for individuals regardless of their sex. Since the beginning of the revolution we have set up 16 centers to assist women as well as three academies in Afrin, Qamishlo and Kobani (Syrian Kurdish towns) that seek to eliminate the patriarchal mindset ruling society for thousands of years.

Is Assad winning this war? 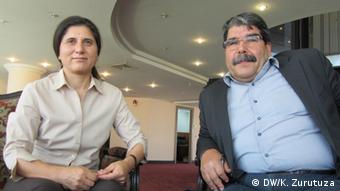 Salih Muslim: Everyone knew that a government shift in Syria would affect the whole Middle East region, that's why Russia and Iran are backing Damascus so fiercely. In addition, the entrenchment of the conflict is leading to several unexpected phenomena, like Washington labelling Jabat al Nusra as a "terrorist organization" or the bloody nature of the ongoing conflict. Nobody expected such a brutal war. Today we cannot say that Assad is stronger, it's simply that, after two and a half years, the opposition is weaker and fragmented in a myriad of different branches with support from both outside and inside Syria diminishing by the day. The weakness of the Free Syrian Army makes it difficult for them to distance themselves from Islamic radicals because the latter have more military power. Besides, we should not forget that today no Syrian wants their country to turn into an emirate. We saw all this very clearly from the beginning and now the rest of the country is starting to open its eyes.

Who benefits from this turmoil?

SM: There are clear and obvious agents such as Turkey and Iran but others remain in the shadow. Some want to subject the whole area to constant chaos. It could be France, it could be the United States... I truly believe that Syria's is a controlled chaos, part of an overall plan for the whole Middle East region. One day they support the government, and the opposition the following one. It's like a game that helps to strengthen or weaken, and not only that but the whole region depending on the interests.

It appears that you have been left to deal with a Cold War-type scenario between East and West. Is anybody backing the Kurds in Syria?

SM: Only the Kurds in the other three regions of Kurdistan (Kurds are divided by the borders of Iran, Iraq, Turkey and Syria). The greatest paradox of all is that the Syrian Kurdish society is a democratic one in its deepest roots. Arabs, Kurds, Assyrians and Armenians have lived together and in harmony for centuries. From the beginning of the revolution we have vowed for a democratic and secular society that defends women's rights, boosts education. The PYD advocates a "radical democracy" or "direct self- determination," basically decentralizing power so that people are able to take and execute their own decisions. It could be good for all the Syrians too because it is a more sophisticated version of the concept of democracy that matches many of the recent social movements in Europe. We should be a natural ally of the West in the region but I strongly believe that your governments are not telling the truth about us to your people.

Are you optimistic about the peace process underway between Turkey and the PKK?

SM: On the one hand we understand that the changes in the Middle East demand it. However, it is the ninth unilateral ceasefire between Ankara and the PKK so it's not easy to be optimistic. The fact is that the Kurds have taken important steps such as the withdrawal of their fighters from Kurdish areas inside Turkey whereas Ankara has not yet moved forward. Turkey needs to decide whether it wants to be part of the Middle East or to be destroyed.

Much has changed for the Kurds, Syria's biggest ethnic minority, since the start of the revolution. Oppressed under President Assad, they're now more confident than ever - politically, militarily, and culturally. (22.05.2013)