Syria's parliamentary elections have gone ahead after delays caused by the coronavirus pandemic. Polls were also held in former opposition strongholds — for the first time since the civil war started. 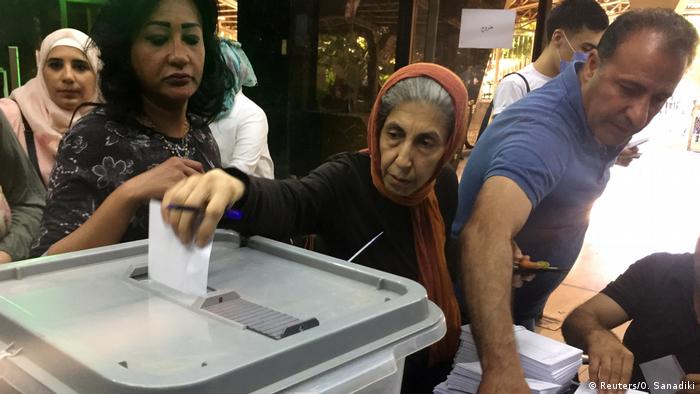 Voters in war-torn Syria cast their ballots to elect a new parliament on Sunday, as the country grapples with international sanctions and a crumbling economy. Due to the coronavirus pandemic, polling staff wore masks, checked voters' temperature and ensured they stayed at a distance while lining up for the vote.

Some 2,100 candidates were contesting for parliament's 250 seats in all the 15 multi-seat constituencies, according to official figures. However, any real political opposition is absent, with most candidates from Baath and its loyalist groups. President Bashar al-Assad is expected to claim an overwhelming victory.

Assad and his wife Asma voted in Damascus, with the president's office posting photos of the couple who wore white face masks.

The poll was the third parliamentary election since the pro-democracy uprising against President Assad in 2011, which sparked a civil war that has killed more than 360,000 people.

The vote, which has been delayed twice since April, was being held in government-controlled areas — including for the first time in former opposition strongholds — and also in areas where Damascus has partial control, for example in the provinces of al-Hasakah, Idlib and al-Raqqa.

Read more: Opinion: Europe and the US have completely failed Syria

More than 7,400 polling stations were in place, according to the electoral commission. But millions of Syrians who fled the war and currently live abroad were not eligible to vote, leading Syria's exiled opposition to label the polls a "farce."

"Everything called an election has been a farce under security and military grip ... to form a sham parliament for the regime to use to pass legislation to serve the gang in power," he said.

"All that has changed today is that half the Syrian people have been forced to flee," he told AFP.

Results are expected by Tuesday. In the last polls in 2016, turnout stood at 57%.

Read more: Was 'IS' trying to sell €1 billion worth of drugs in Europe?

As they headed to polling stations, many Syrians were concerned about mounting living costs.

Food prices in the country have increased by more than 200% in the past year and now stand at 20 times their pre-war levels, the World Food Program (WFP) said.

The WFP added that more than 80% of people already live in poverty and are facing an "unprecedented hunger crisis."

Many of the candidates vowed to tackle inflation and improve infrastructure destroyed by the war.

"Lawmakers are going to have to make exceptional efforts to improve services," Umaya, a 31-year-old woman who works in a dentist's practice, told French news agency AFP.

Earlier this week, President Assad marked the 20th anniversary since he assumed power, weeks after the US imposed fresh sanctions on Syria including on Assad's wife.

According to the Syrian Observatory for Human Rights, the Damascus government is back in control of around 70% of the country.

The next presidential polls are expected in 2021. Candidates to be Assad's successor will require written approval of at least 35 members of parliament.

Foreign Minister Walid al-Muallem said in June that Assad would stay in power "as long as Syrians want him to stay."

President Bashar Assad gave no reason for the sudden dismissal of Prime Minister Imad Khamis, who has been in power since 2016. Syria is experiencing a sharp economic downturn, with elections looming next month. (11.06.2020)