The Syrian army, backed by Lebanese Hezbollah fighters, has entered the rebel-held town of Zabadani on the border to Lebanon. Capturing the town would be a boost to the government after several setbacks. 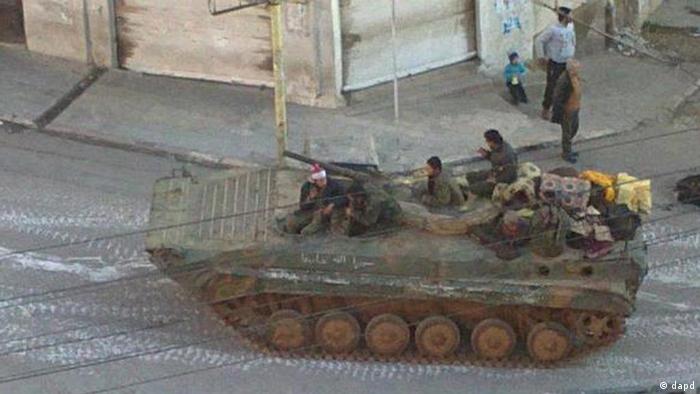 The Britain-based Observatory, which monitors Syria's civil war using a network of activists on the ground, said at least 14 Syrian soldiers and Lebanese allies, and 11 Islamist rebels led by the Nusra Front, had been killed since Saturday. It also said army helicopters had dropped at least 12 barrel bombs on the town since Sunday morning.

Syrian state television also announced the entry of government forces into the city.

"Heroic army forces in cooperation with the Lebanese resistance took control of the Al-Jamaiyat neighborhood in western Zabadani and the Al-Sultana neighborhood in the east of the city," it said in a breaking news alert, adding that "dozens of terrorists" had been killed and wounded amid an ongoing operation.

Zabadani, some 45 kilometers (30 miles) northwest of the capital, has been in rebel hands since 2012, when it became one of the first towns to be taken in an uprising against the government that began in March 2011. It is one of the rebels' last strongholds in the Qalamun border area around the Beirut-Damascus highway.

The government offensive to retake the town began on Saturday after several days of bombing and shelling of rebel outposts.

If the army does recapture the town, it will be a boost for the government of President Bashar al-Assad, which has suffered a number of setbacks in recent months at the hands of Islamist rebels in various parts of the country.

Syria's civil war has attracted thousands of foreign jihadis who are fighting to oust al-Assad, exacerbating the original conflict between Syrian-born rebels and the government, which had its roots in initially peaceful anti-government protests at the beginning of 2011.

One militant group, the "Islamic State," now controls vast swathes of territory both in Syria and in neighboring Iraq.

The conflict has killed more than 200,000 people and displaced millions more.