Syria: Erdogan left out in the cold by Arab states in anti-Assad fight | Middle East | News and analysis of events in the Arab world | DW | 29.02.2020

Syria: Erdogan left out in the cold by Arab states in anti-Assad fight 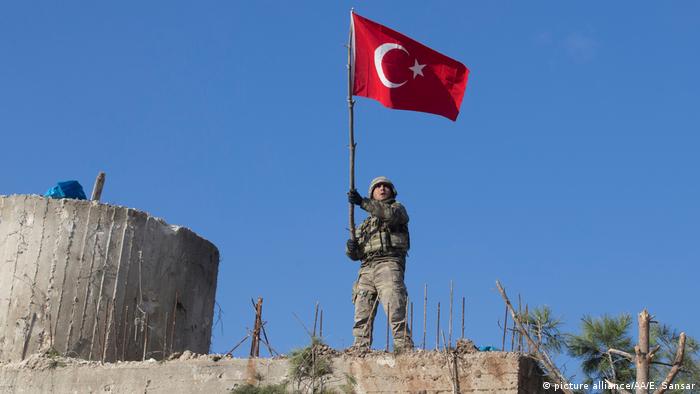 While the Turkish military has suffered significant casualties in Syria's Idlib region as a three-month Russian and Syrian offensive intensifies, Erdogan's former Arab partners in Syria have largely left him alone in the quagmire while they quietly broker new ties with Syria's Bashar Assad.

Experts say those Arab countries are following US policies in withdrawing from Syria and that they fear Turkey has imperial ambitions of its own. Some also dislike Erdogan's relations with their regional rival Iran, they say.

"Now he stands alone facing a superpower like Russia and an experienced Syrian army on Syrian soil," said Abdel Bari Atwan, the editor-in-chief of the London-based online Arabic daily Rai al-Youm. "His position is critical."

Although Turkey's NATO allies held urgent talks Friday after 33 Turkish soldiers were killed overnight, the body's ruling council did not commit to any new assistance, something Erdogan does not much count on anyway, according to Turkish political analyst Taha Odehoglu.

"Going back seven years, Turkey was the tip of the spear in a coalition that included 65 countries. Saudi Arabia, the UAE and Qatar all supported Erdogan in his political and military intervention in Syria," Atwan said.

The Arab League recognized the Syrian political opposition coalition in 2013. But now, Qatar appears to be Turkey's only firm ally in the fight, while other Arab states rebuild relations with Assad.

Jordan — which had previously armed rebels and flown sorties into Syria — announced in August 2017 that its bilateral ties with Damascus were "going in the right direction" again. A week later, Saudi Arabia told Syrian political opposition leaders it was disengaging from Syria.

In December 2018 the UAE and Bahrain announced they were reopening their embassies in Damascus, and in March the next year, the UAE pledged its support for Assad in the war.

But Erdogan's stalwart ally Qatar has repeatedly expressed public support for his actions in Syria, with Qatar's foreign minister telling regional media in January his country will never forget Turkey's support and will side with Ankara when necessary.

While pro-Assad outlets in Syria have reported a warming of ties with Saudi Arabia, that country's loyalties appear less clear. Turkish-Saudi relations have long been fraught but soured considerably in 2018 when Turkey pushed the de facto Saudi ruler Mohammed bin Salman to account for the death of Jamal Kashoggi.

The kingdom has denied reports it has been planning to open an embassy in Damascus, and committed to supporting the opposition in Idlib in a meeting with US diplomats on Friday, according to the US Embassy in Saudi Arabia.

Facts on the ground and regional rivalries

Rai al-Youm'seditor Atwan said those Arab states that had withdrawn their support were following the US' lead and realized the situation had changed after Russia entered the war, Islamic State (IS) was brought down and opposition groups had become more radical.

"The US has almost withdrawn from the Syrian crisis, and revolutionary factions have begun to fall away to the benefit of militant Islamic groups that are on the US' terrorism list," Atwan said.

But regional rivalries have also played a strong role. Atwan said one of the reasons for the split was what some Arab states saw as Turkey's attempts to "revive a neo-Ottoman empire."

Egypt, Saudi Arabia and the UAE have been wary of Turkey's ambitions as it expands its military footprint in Syria, Iraq and across North Africa.

Qatar and Turkey also share sympathies with the Muslim Brotherhood, which those Arab monarchies and autocracies see as an ideological threat to their own political orders. 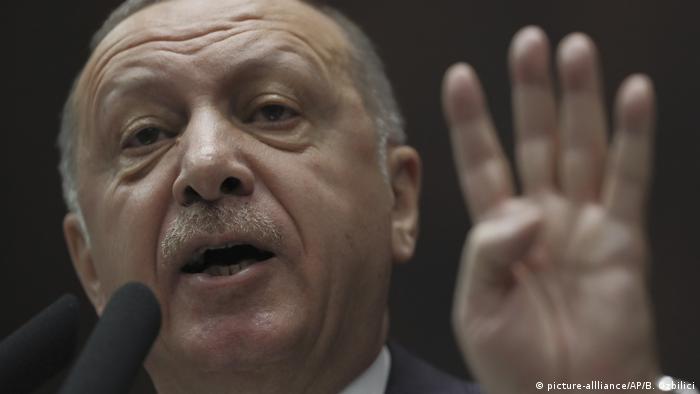 Erdogan holds out four fingers in what is known as the Rabaa sign, also understood to be a gesture of solidarity in the Muslim Brotherhood.

Turkish analyst Odehoglu said Erdogan's diplomacy with Iran over the conflict has also contributed to its isolation, as Tehran is the major regional rival for Saudi Arabia and the UAE.

As the offensive has escalated even more in recent weeks, Atwan sees two ways out: Turkey can abide by the 2018 Sochi agreement, meaning it would have to disarm Islamist groups such Hayat Tahrir al-Sham within the territory it controls, or it should withdraw, Atwan said.

"Erdogan's continued interference in Syria is interpreted as an invasion and occupation, and in the long run it can't continue," Atwan said. "Further involvement will not benefit him, and he faces strong opposition inside Turkey, especially after the death of more soldiers."

But a new influx of Syrians fleeing the violence could further erode his support domestically. Allowing them to move on to Europe, on the other hand, would see him lose billions in funding from the EU agreed as part of a deal to keep Turkey's borders closed.

Odehoglu said Erdogan is banking on a deal with Russia. "The blow Ankara has received was painful and any false steps in its response will have major repercussions for Turkey," Odehoglu said. "It does not want to lose its relationship with Russia … Turkey is tending toward striking an agreement to make a compromise to deescalate the crisis."

"Without a doubt, Turkey totally feels that it is alone among Arabs and Europeans and even with its American allies, but it does not count very much on them … the door is not completely closed with Russia."

European and NATO partners are alarmed at the prospect of a further escalation between Turkey and Russia in northern Syria. Here the most pressing questions on the ongoing conflict of interests in the region. (28.02.2020)