Rescue workers extinguish a fire cause by an explosion in the city of Azaz, in the rebel-held northern area of Syria's Aleppo province

Car bombs in rebel-held areas of the Syrian province of Aleppo killed at least 11 people on Sunday, a war monitoring group said.

At least six civilians — including a woman and child — were killed when a car bomb detonated in the city of Azaz, the Syrian Observatory for Human Rights said. The Britain-based monitor said the explosion injured at least 30 other people and caused heavy damage to surrounding buildings.

The blast went off near the city's cultural center, which is being used by Turkey-backed rebels as the base of a self-styled opposition government, a police source told news agency dpa.

An AFP reporter on the scene reported seeing a man run away from the blast site carrying a child in a bloodied cloth. They also reported seeing black smoke billowing from a mangled car. 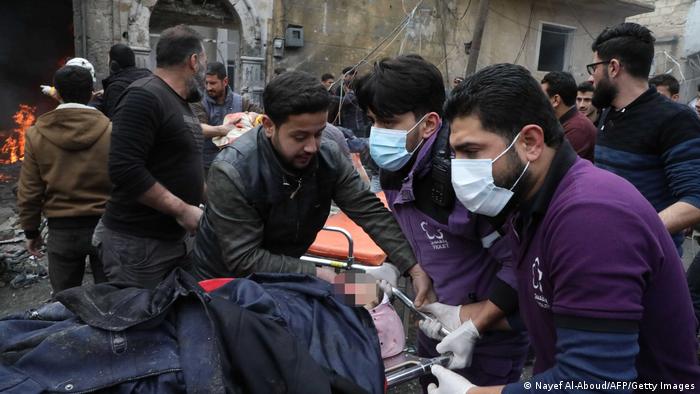 At least 30 people were injured in the blast in Azaz

Five of the group's fighters were killed while another four were injured, the Reuters news agency reported, citing FSA sources.

In another incident on Sunday, Kurdish security forces opened fire on pro-Syrian government demonstrators in the northern city of Hassakeh.

One person was killed and four were injured, both the Observatory and state news agency SANA reported.

"It is not known whether the injured were civilians of the protesters or security agents," the Observatory said.

The deadly attacks on Sunday rounded out a violent weekend in northern Syria.

On Saturday, the city of Afrin was rocked by a blast from an explosives-laden car. At least eight civilians were killed — half of whom were children. 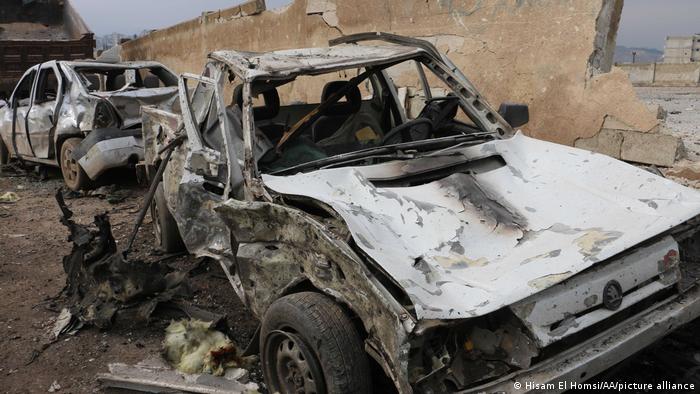 No group immediately claimed responsibility for the attacks. Turkey at its allied forces in Syria have regularly blamed the Kurdish-led Syrian Democratic Forces.

Turkey considers the force a terrorist organization and offshoot of the outlawed Kurdistan Workers' Party (PKK).

Kurdish forces were pushed out of areas in northern Syria in 2019 after Turkey mounted an offensive in the region.

The Kurds are Syria's largest ethnic minority. Since the start of Syria's civil war in 2011, they have established a semi-autonomous territory in the north where they run their own affairs and control much of Syria's oil resources.

Expectations were high for the fifth round of meetings of the Syrian Constitutional Committee's at the UN in Geneva this week. But the report of the preliminary end of the committee's work is devastating.

A few years ago, "Islamic State" was a powerful terrorist organization. Today, it has largely gone underground, but it continues to mobilize its followers to launch attacks.