Syria: Are water supplies being weaponized by Turkey? 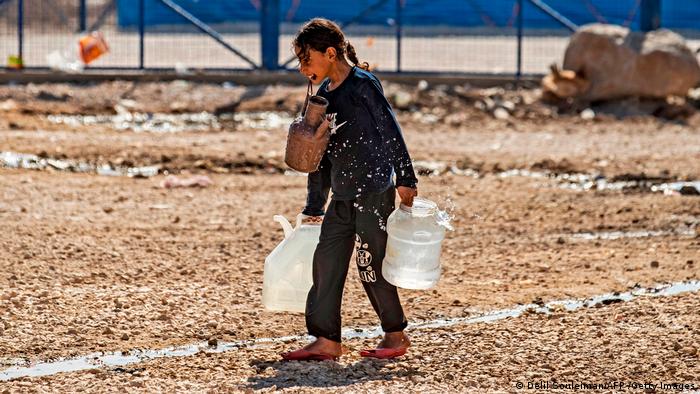 Around 1 million people in the Kurdish-governed region of Al-Hasakah in Syria's northeast have again had their water supply cut off — as they have around 20 times in the past 12 months.

"This is a humanitarian disaster," Sara Kayyali, a Syria researcher at Human Rights Watch, told DW. As of this Sunday, some parts of the region are experiencing the eighth straight day without water.

Problems with the supply from the nearest water station, Alouk, have been growing since Turkish forces and their Syrian rebel proxies took charge in October 2019, after the so-called Operation Peace Spring that targeted the Kurdish-led Syrian Democratic Forces (SDF) in the region. While the water station has been under Turkish control since then, it relies on the SDF-controlled Mabrouka Electricity Station for its power. Turkey's objective behind Operation Peace Spring was to create a 30-kilometer (19-mile) wide "safe zone" under Turkish control inside Syria. 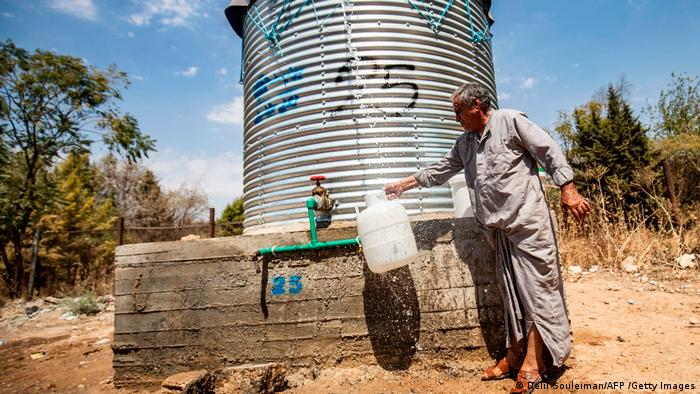 Water from tanks is not only up to three times more expensive but also of inferior quality, leading to diseases

"Since then, a cornerstone of humanitarian capabilities has been repeatedly cut off, and water outages create ramifications across the entire population," Kayyali told DW.

Syria claims that Turkey is behind the water outages, and accuses Turkey of having a major interest in destabilizing the region with the (mainly Kurdish-Syrian) population of around 1 million in cities such as Al-Hasakah, more than 45 villages and many official and unofficial refugee camps. Officially, Turkey doesn't take any responsibility for the repeated outages and claims they are due to technical issues.

"I have to note that Turkey denies the accusation of cutting water to the region and says the Alouk station has merely been under maintenance and faces a lack of electricity from a dam not under Turkish control," Guney Yildiz, a political analyst and IPC-Stiftung Mercator Fellow at the Centre for Applied Turkey Studies and the German Institute for International and Security Affairs, told DW.

"On the other hand, Turkey openly declares its intention [in Turkish media — Editor's note] to eradicate the administrations set up in northeast Syria and is most probably willing to use various means to accomplish that. Destabilizing the region is part of that strategy," Yildiz added.

Turkey's public position on the northeastern Syrian administrations remains unclear. DW contacted the head of media and communications for the Turkish presidency, Fahrettin Altun, for clarification, but has received no response so far.

"The threat of an independent Kurdish region near Turkey is an idea that may encourage more uprisings from within Turkey's sizable Kurdish population, so Erdogan is looking to prevent a Kurdish state in Syria," Charles Flynn, a researcher at the region's Rojava Information Center, told DW.

Flynn considers fears of an independent Kurdish state as one of three reasons. "With the creation of Turkish-backed militias that recruit from extremist groups such as ISIS, Erdogan can't have these militants come home to Turkey and start operating. And economically, war is always good for the economy, and the Turkish economy hasn't been doing so well with the US sanctions and the COVID-pandemic," he said.

The latest overview from the UN's Office for the Coordination of Humanitarian Affairs (OCHA) in Syria, dated January 12, reported 12,462 COVID-19 cases. Some 8,227 cases were reported from northeast Syria, as of January 9.

"Access to water is all the more critical in [the] context of the COVID-19 pandemic. The UN continues to advocate to the relevant parties to ensure the provision of water from Alouk in line with international humanitarian law, and across Syria, to ensure that all civilians have access to basic services," Danielle Moylan, OCHA's spokesperson, told DW.

As early as last March, UNICEF's representative in Syria, Fran Equiza, warned of the consequences of leaving 1 million people without water and relying on temporary solutions, particularly in times of a pandemic. "The interruption of water supply during the current efforts to curb the spread of the coronavirus disease puts children and families at unacceptable risk. Hand-washing with soap is critical in the fight against COVID-19," he said.

Temporary responses organized by local authorities and human rights organizations, such as tankers carrying water to surrounding villages, are no real substitute. The water is more expensive, of a lower quality and is not suitable for drinking.

"This issue is difficult to solve without international intervention to end this human suffering for the people in those areas," Taha Odeh Oglu, a researcher of Turkish affairs and international relations, told DW.

As of Friday afternoon, Alouk's water station is reported to have started operating again. However, it will take up to three days for the water to arrive to the people in the Al-Hasakah region.

The Syrian military has mobilized soldiers toward the north of the country to face the Turkish incursion. France is taking measures to ensure the safety of its military and civilian personnel in the war-torn region.