Switzerland has voted overwhelmingly in favor of tightening the country's asylum law. The controversial decision comes with refugee applications having risen to their highest level in more than a decade. 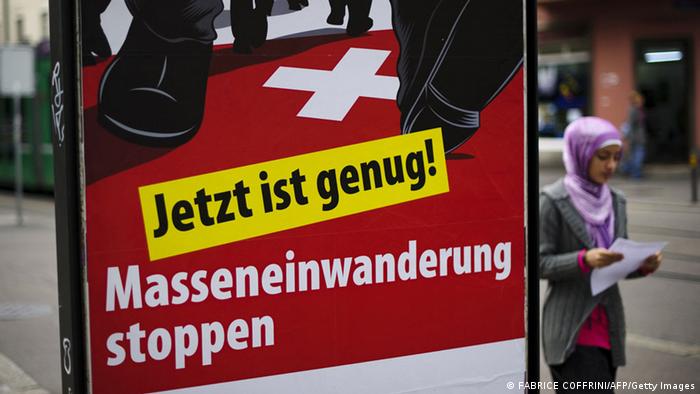 The asylum law revisions passed with 79 percent support from voters on Sunday, according to the final results of a national referendum published by public broadcaster SSR.

Celine Amandruz of Switzerland's largest party, the Swiss People's Party (SVP), welcomed the changes to the law. She insisted that nine out of 10 people who seek asylum in the country did so "for economic reasons."

"There is clearly a need to change this system," she said.

Parliamentarian Anne Seydoux-Christie, however, condemned the changes. Speaking against the official line of her Christian Democratic Party, Seydoux-Christie said the vote "marks a weakening of our humanitarian tradition, and certainly a lack of solidarity towards what is happening in countries in serious crisis."

Among the most controversial revisions was eliminating military desertion as valid grounds to seek asylum.

For Eritreans, who accounted for the most asylum applications last year in Switzerland, military desertion was the most-cited reason. The African country imposes unlimited and low-paid military service on all able-bodied men.

Another change was the removal of the possibility of people applying for asylum from Swiss embassies. Opponents called the move "inhumane" because it meant people would have to make the often dangerous journey from their home country to Switzerland without government help.

The revisions allow for a "special center" to be built for "recalcitrant" refugees who are considered troublemakers.

Justice Minister Simonetta Sommaruga said the changes were for the good of the asylum seekers and highlighted efforts to speed up the process.

"Leaving people and their families for so long wallowing in uncertainty is unacceptable," she said.

The Swiss government says there are some 48,000 people in the process of seeking asylum, including 26,631 in 2012. For every 332 inhabitants, one is an asylum seeker, Switzerland says. That rate is well above the European average of one for every 625 inhabitants, and trails only Malta and Luxembourg.

The country has experienced a recent rise in asylum seekers - largely due to the Arab Spring uprisings - not seen since the height of the Balkans wars. In 1999 almost 48,000 sought asylum in Switzerland.

Other issues voted on in Switzerland Sunday included an initiative for people to directly elect their government rather than have it chosen through parliament. The move was rejected by 76 percent of voters, an SSR forecast said.

A vote in Zurich imposed stricter measures against football hooligans, while another rejected imposing higher taxes on the "super rich."

'Freedom of movement is slowly being undermined'

The countries in the Schengen border-free area will in future be able to impose border controls if they don't like how other countries control immigration. DW spoke to a Green member of the European parliament. (30.05.2013)

Berlin says it wants to know more about Switzerland's plans for a nuclear waste site close to the German border. The German government had already expressed some concern about the proposal.

A "major computer failure" led to the suspension of Swiss airspace. The air navigation service provider says an unknown tech malfunction, which grounded outbound flights and prompted arrivals to be rerouted.

Swiss march for same-sex marriage ahead of referendum 04.09.2021