A special prosecutor has launched criminal proceedings against FIFA head Gianni Infantino over his secret meetings with Switzerland's attorney general after "indications of criminal conduct." 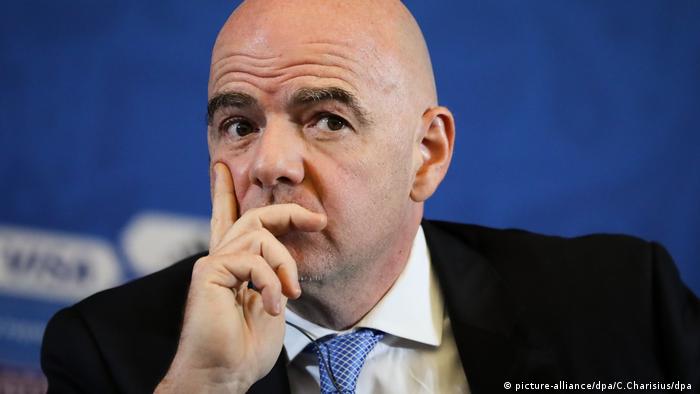 Last week, Lauber offered his resignation after a court found that, while Lauber's office was investigating FIFA-related corruption, the prosecutor had tried to hide a meeting with the FIFA head and lied to his supervisors in the Swiss judiciary.

Lauber is now set to leave his post at the end of August.

Lauber and Infantino allegedly met in secret three times in 2016 and 2017. Both of the men have denied any wrongdoing. In April, FIFA slammed the accusations as "deliberately misleading and malicious."

Infantino had mandate to clean up FIFA

Infantino, a lawyer by training, took over world football's governing body in 2016 in the aftermath of his Swiss predecessor Sepp Blatter's ignominious exit. Blatter resigned amid allegations of corruption tied to payments made to his presumed successor, then-UEFA President Michel Platini.

Infantino was charged with cleaning up the organization, while Lauber was tasked with investigating it. But just over a year after his reelection as FIFA president, the undocumented meetings have endangered Infantino's credibility.

In a statement released on Thursday afternoon, Infantino insisted that meeting Lauber is "perfectly legitimate and it’s perfectly legal." FIFA also said it would cooperate fully with the investigation.

"As President of FIFA, it has been my aim from day one, and it remains my aim, to assist the authorities with investigating past wrongdoings at FIFA," Infantino said. "FIFA officials have met with prosecutors in other jurisdictions across the world for exactly these purposes. People have been convicted and sentenced, thanks to FIFA's cooperation, and especially in the United States of America, where our cooperation has resulted in over 40 criminal convictions. Therefore, I remain fully supportive of the judicial process, and FIFA remains willing to fully cooperate with the Swiss authorities for these purposes."

The meetings allegedly took place while the Federal Public Prosecutor's Office was actively investigating FIFA concerning, among other things, the awarding of the 2018 World Cup to Russia and 2022 to Qatar.

Previously, Infantino has expressed his frustration at allegations of wrongdoing.

"What bothers me a bit is the wording about secret meetings. There is nothing secret in meeting a prosecutor in a civilized country. We are happy to be cooperating with the Swiss authorities as we do with authorities all the world," he said earlier this year.

But it is the undocumented nature of those meetings that has raised eyebrows. There has been speculation that Infantino was looking into whether there was a criminal investigation into him and potentially interfering with other investigations into FIFA and its partners.

Haitian football's sexual abuse scandal: A tangled web with Jean-Bart at its center