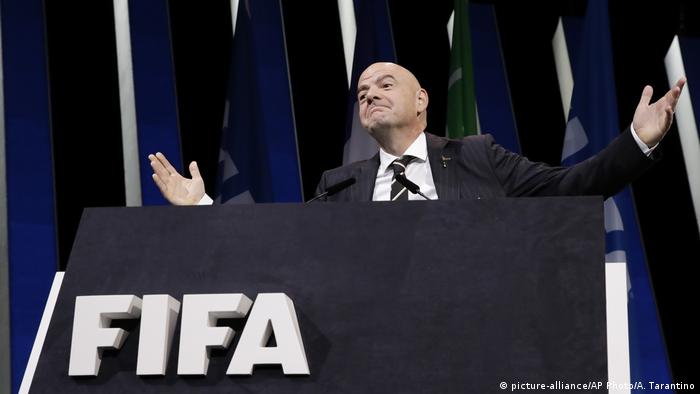 The 49-year-old took over the reins of FIFA in February 2016, after a corruption scandal rocked the organization and ousted disgraced former President Sepp Blatter.

Infantino, a Swiss-Italian lawyer, now has at least until 2023 to carry out his big plans for football, which were partly frustrated in his first term.

At the FIFA conference in Paris, Infantino told the organization's 211 members that the FIFA had gone from "being toxic, almost criminal, to what it should be."

"It is only thanks to you that we have been able to transform FIFA, to transform it into a new FIFA, an organization that is synonymous with credibility, confidence, integrity, equality, human rights, social engagement, modernity, professionalism and equality," he said.

Plans to hold the 2022 World Cup in Qatar, have been hampered by political crisis in the Gulf, along with labor and human rights issues. Still, during his first term, Infantino was able to enlarge the men's World Cup from 32 to 48 teams, albeit not in time for the Qatar tournament.

The 48-team World Cup will kick off in 2026 and is planned to be co-hosted by the US, Mexico and Canada.

Infantino is also pressing ahead with plans for a new Club World Cup, comprising 24 teams, from 2021. The existing format involves just seven clubs.

In 2016, soccer leaders in North and South America were ousted after American and Swiss prosecutors
uncovered  financial corruption linked to the game's governing bodies.