Swiss ′WikiLeaks′ banker fined for giving away secret client data | Europe | News and current affairs from around the continent | DW | 19.01.2011

Former Swiss private banker Rudolf Elmer was found guilty on Wednesday of charges including violating bank secrecy and attempted coercion. He was ordered to pay fines and was re-arrested shortly afterward on new charges. 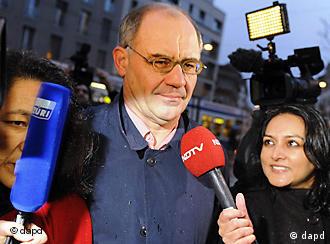 Rudolf Elmer has been sentenced to a fine of 7,200 Swiss francs (5,500 euros, $7,400) which will be suspended over two years. Judge Sebastian Aeppli rejected prosecution demands for an eight-month prison sentence.

Elmer admitted he sent private client data to tax authorities, saying he was a whistleblower aiming to expose wrongdoing in the banking sector.

The 55-year-old banker helped bring WikiLeaks to prominence in 2008, when he went to the website with secret client information. He said his actions were prompted by Swiss authorities failing to act on data that showed his employer, the Julius Bär bank helped clients to dodge taxes.

"The ethics of business leadership on both sides of the Atlantic have disappointed me," he told the court, and said that he wanted to expose illegal activity in the Cayman Islands.

Despite avoiding prison charges, Elmer was re-arrested immediately after the conclusion of the court proceedings, once again on suspicion of violating Swiss banking laws in an incident earlier this week. On Monday, Elmer gave WikiLeaks two discs, which he said contained data on 2,000 clients of several elite Swiss banks. 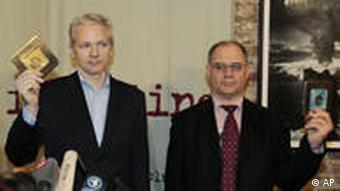 Elmer claimed during the trial at Zurich's regional court that he acted after being persecuted by the bank, claiming his former employer waged a campaign of "psycho-terror" and had offered him hush money to keep quiet about illegal activity in the Caymans.

Julius Bär, which has denied its Cayman branch was used for tax dodging, says Elmer waged a "campaign of personal intimidation and vendetta" against the bank after it refused his demands for financial compensation following his 2002 dismissal.

Elmer admitted writing anonymous emails in 2005 threatening to send client details to tax authorities and the media if the bank did not stop unspecified actions.

The Zurich court found Elmer guilty of threatening an employee at his former firm.

WikiLeaks documents published by a Norwegian newspaper have caused a German satellite company CEO his job. Berry Smutny reportedly called a major European project his company is involved in a 'stupid idea.' (18.01.2011)

Rudolf Elmer, who says he only wants to expose the truth about the Swiss banking system, has given WikiLeak's Julian Assange two CDs containing confidential banking details of the rich and the famous. (17.01.2011)

Former Swiss banker poised to give account details to WikiLeaks

A former Swiss banker plans on providing secret account information to WikiLeaks on Monday. Rudolf Elmer was one of the first people to give controversial data to the website, releasing internal bank documents in 2007. (16.01.2011)