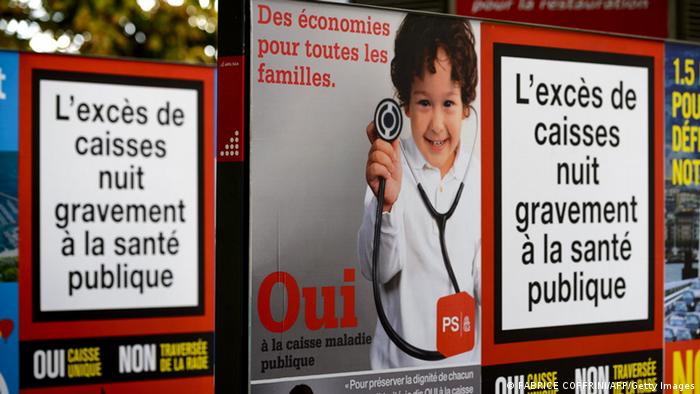 Six out of ten Swiss voters on Sunday rejected a seismic reform of health care. Campaigners had argued that a single public-run scheme would be better at reigning in costs than the current system of 61 competing companies.

The Swiss Insurance Association representing the private firms hailed the outcome, saying competition made the Swiss system a "top performer."

The Geneva Physicians Association had backed the call to scrap the current system. Its head Michael Matter said health costs had risen 80 percent in the past 20 years.

Insurance premiums, meanwhile, had climbed 120 percent, Matter said: "It has to change."

The failed referendum, backed by Social Democrats, the Greens, trade unions and patient and consumer organizations, had advocated a single public system.

That was rejected by 61.8 percent of voters. Turnout was nearly 47 percent.

The returns showed regional variations. German-speaking Swiss regions voted against the plan. French-speaking regions tended to be in favor.

Switzerland's population of 8 million has a choice among the 61 firms. For adults the monthly health premium costs around 400 francs (331 euros).

That does not include out-of-pocket spending on treatments such as dental care.

Critics say the current system is unfair because basic coverage costs a millionaire no more than it costs a low-paid worker.

In Germany, fees for mandatory health insurance - equating to around 14 percent of an individual's gross salary - are paid fifty-fifty by the employee and employer.

Cars, homes, accidents, illness - Germans often sign up for comprehensive insurance coverage. But things look quite different in India, where the government wants to further open up the insurance market to foreigners. (17.07.2014)

The RSBY health insurance scheme for India's poor is a mammoth undertaking. Over the past six years, some 36 million families have acquired a smart card which entitles them to medical treatment. (25.02.2014)

After speaking with Daniel Bahr about his new job, the Bild am Sonntag paper asks: "Will 'Obamacare' become 'oBAHRmacare'?" The pro-business Free Democrat says he's found it amusing to be branded a "socialist." (02.02.2014)