After speaking with Daniel Bahr about his new job, the Bild am Sonntag paper asks: "Will 'Obamacare' become 'oBAHRmacare'?" The pro-business Free Democrat says he's found it amusing to be branded a "socialist." 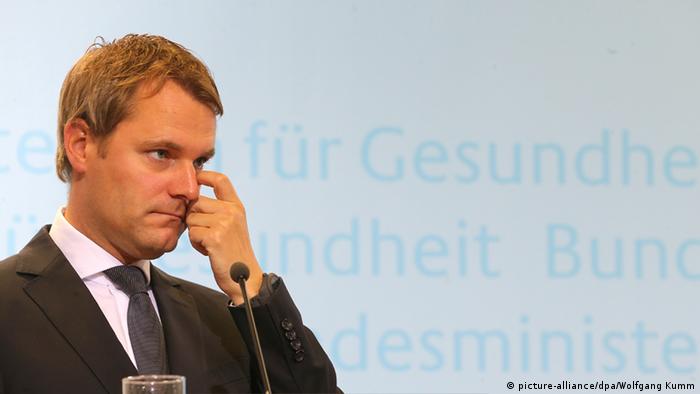 Daniel Bahr lost his place in the German cabinet when the pro-business Free Democrats imploded at the polls in September general elections, missing the 5-percent hurdle required to guarantee parliamentary representation for the first time in post-war Germany.

"Don't worry about me, I'll find something," Bahr had said shortly after the defeat.

Just over four months later, the 37-year-old Free Democrat told Sunday's Bild am Sonntag that he was "taking a timeout" from politics in Berlin, starting work in Washington as an advisor to the US government.

"Starting in mid-February, I will accompany the US health reform process and also be active in an advisory capacity at the US think tank 'Center for American Progress'," Bahr, who served as health minister from May 2011 to the end of 2013, told Bild.

Overhauling the US' primarily private health insurance provision system was a key campaign talking point for Obama when he was first elected in 2008. Five years on, the "Affordable Care Act" more commonly referred to as "Obamacare" remains a work in progress. Facing considerable resistance from the opposition Republicans, and now difficulties with a government website meant to serve as the purchasing portal for the new insurance options, the three-year-old legislation remains incomplete mid-way through the Democrat president's second and final term.

Pro-business liberal in Germany, socialist in US

"It's unbelievably exciting to follow the American discussion on President Obama's health reforms. Although as a free-market liberalist, I had to chuckle when I was labeled a 'socialist' in a discussion, because I asserted that every citizen should have health insurance," Bahr said.

Among Germany's major political parties, the Free Democrats represented the most overt advocates of an unfettered free market, a liberalist party as opposed to the popular modern US definition for the term "liberal."

While the state and federal governments largely run hospitals in the country, Germany uses a primarily private health insurance system bolstered by a string of state guarantees and safety nets. German insurance companies are subject to state regulation, and employers contribute to their staff's healthcare costs.

Bahr's stay in the US, along with his wife Judy Witten and their baby daughter Carlotta, is currently scheduled to last only until the summer. Prior to this, the keen marathon runner will seek to beat his personal best of 3 hours and 47 minutes in April's Boston Marathon.

"I'm taking a timeout from the Berlin political business. I've lived in the fast lane for years as health minister and electioneer. My wife and I are looking forward to this interval in a different culture with all-new impressions," Bahr said.

Following September's elections, Germany's pro-business Free Democratic Party is no longer in the federal government nor in the national parliament. But the party is already hard at work to turn things around by 2017. (04.01.2014)