Swiss feel country is ′bursting at the seams′ | Europe| News and current affairs from around the continent | DW | 08.02.2014

Swiss feel country is 'bursting at the seams'

The Swiss vote on immigration quotas divided the country. The party that sponsored the referendum spoke of a 'lack of space.' Experts and other Swiss parliamentarians warn of disastrous consequences. 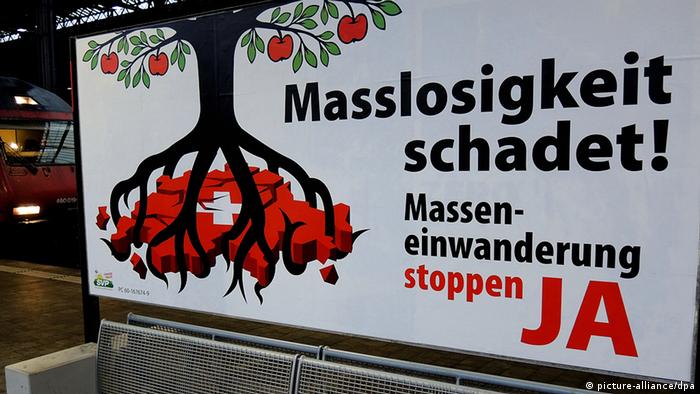 When Germans hear Switzerland, they first think of the children's book "Heidi," snow-covered mountains and secure bank accounts. Their neighbor to the south is a popular vacation destination, but more and more Germans also come to Switzerland to work. They can do so because the small, neutral state entered a freedom of movement agreement with the European Union in 1999. Even though Switzerland isn't a member of the union, EU citizens have been allowed to immigrate to Switzerland with hardly any restrictions since then.

That is now set to change. In a nationwide referendum, the Swiss voted "yes" on an "initiative against mass-immigration" on Sunday (09.02.2014). The initiative was put forward by the nationalist Swiss People's Party (SVP). The party wants to restrict the number of immigrants and allocate a limited number of slots to certain national or occupational groups.

Switzerland 'bursting at the seams'

Roughly 80,000 immigrants enter Switzerland every year - and this in a country of 8.1 million. According to the German weekly "Die Zeit," this is the largest population growth the country has experienced since the 1960s.

"We have created the initiative because it's really become excessive," said Toni Brunner, the head of the SVP, in an interview with German radio station SWR. "We have too much immigration. With our initiative, Switzerland gets back the ability to control and restrict and select appropriate personnel for the job market." 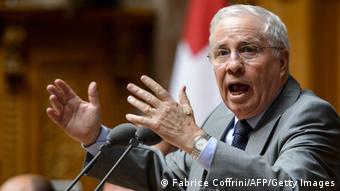 Blocher says the large number of immigrants hurts his country

According to Christoph Blocher, vice chair of the SVP, Switzerland would be better off without the large foreign population of 23 percent.

"All the problems we have go back to that," Blocher said. "Lack of space, lack of housing, falling wages, problems in schools. The country is bursting at the seams."

All other parties oppose the SVP's initiative. They accuse the party of scaremongering and are weary of potentially sealing Switzerland off from the rest of Europe. The Democratic Citizens' Party (BDP) foresees negative consequences for the country should the number of immigrants be drastically reduced.

But it's not the parliamentarians who vote on the anti-immigration initiative - it's the people. And not all of them welcome foreigners with open arms.

"Too many Swiss have racist tendencies," said Andreas Gross, a parliamentarian for the Social Democratic Party of Switzerland (SP), in an interview with German public radio. He's aware of his fellow citizens' complaints about bursting cities and wage pressure, but said: "Many Swiss have worries, and the better they're doing, the more worries they have."

Gross has no tolerance for such grumbling, not to speak of an initiative to restrict the number of foreign workers: "Switzerland is doing better than ever, and we have the people who are working here to thank for it." 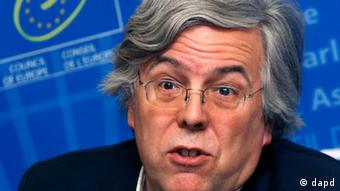 Gross hopes the Swiss will vote against the initiative

Many Germans are among these workers. One of them is Jens Eckstein, a doctor at the University Hospital of Basel. According to estimates of the Swiss Caretakers Union, 30 to 40 percent of health workers in Switzerland are foreigners. Eckstein came to Basel because of better wages and has not experienced any xenophobia. "I feel greatly appreciated at the hospital, otherwise I wouldn't be here," the doctor told German radio station HR.

A few weeks ago, it looked like the "initiative against mass immigration" didn't stand a chance. Now, exit polls show it passing. That said, the country can't just close its borders.

Switzerland entered a binding contract with the EU. The freedom-of-movement agreement is just one of a package of seven contracts. Withdrawing from one contract would render the other ones invalid as well.

Switzerland would risk free access to the European market with 500 million customers. That's a significant issue, because 60 percent of Swiss exports go to EU member states.

Germans in Switzerland uncertain of future

German immigrants to Switzerland feel unsettled - but not surprised. The Swiss, they say, are both tolerant and xenophobic. What they can't imagine is how the country will get by with fewer trained workers.

'Switzerland has always been international'

The Swiss have voted to limit immigration to their country. DW spoke to Jan Atteslander of the Swiss Business Federation, who says the Swiss economy needs immigrants.

Switzerland has voted overwhelmingly in favor of tightening the country's asylum law. The controversial decision comes with refugee applications having risen to their highest level in more than a decade. (09.06.2013)