′Switzerland has always been international′ | Europe| News and current affairs from around the continent | DW | 09.02.2014

'Switzerland has always been international'

Exit polls indicate the Swiss have voted to limit immigration to their country. DW spoke to Jan Atteslander of the Swiss Business Federation, who says the Swiss economy needs immigrants. 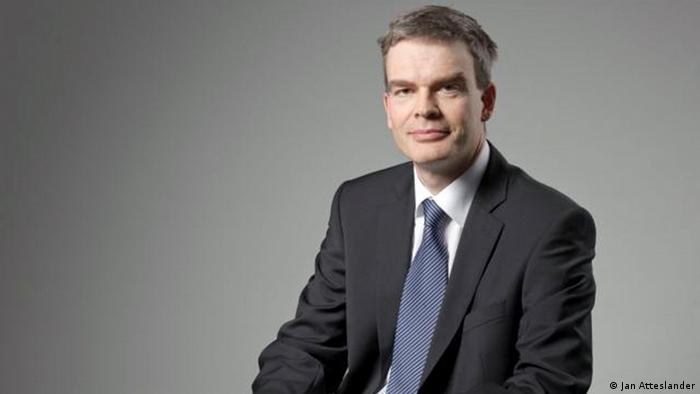 First results from a closely watched referendum on whether to limit immigration to Switzerland suggest that the plan will go through. Authorities have said the final result is still too close to call, but public broadcaster SRF 4 has reported at least half of Swiss voters backed the proposal.

DW: Mr. Atteslander, are there too many foreigners in Switzerland?

Jan Atteslander: There are foreigners in Switzerland, whom we need here, who have a job here and that is very positive for both sides. There are also many Swiss who live in Germany or France. So it's okay for both sides.

In Austria, 11.6 percent of the population are foreign citizens, while there are twice as many in Switzerland, which has approximately the same number of inhabitants. Why is there such a big difference?

Switzerland has always been an international place. I think that has been the case ever since the great migrations. Without being cynical, you can also say that in recent times many people are not choosing to be naturalized. So structurally that leads to a somewhat higher percentage of foreigners. What is important is not the percentage of foreigners as such, but how well the people are integrated.

The conservative nationalist Swiss People's Party speaks of 80,000 foreigners arriving every year in Switzerland. That's the population of a small city. Is there any room for them?

At some point you run up against your limits, that's clear. But we have also had years when we had hardly any immigration. These are structural and cyclical effects. Currently, Switzerland is a very healthy country, socially and especially economically. Our economy is flourishing, similar to the south German economy, and it needs people who work. We ourselves haven't trained enough people. It is also true that we have long had a shortage of living space in the urban areas - and that isn't just because of immigration. But in Munich, Frankfurt and Stuttgart, you also can't easily find a great apartment at a good price. I think this is a phenomenon in many urban areas. But there are also many areas in Switzerland, for example, in the west, in the Emmental and the Jura regions, which are not heavily populated.

What do foreigners mean for the Swiss economy?

They are very, very important. Today, we have a global problem. It's called the war for talent. And globalized, well-integrated economies need highly qualified people, specialists. There's a shortage of them worldwide. It's also true that there are parts of the economy where it's not just a matter of highly skilled jobs. Tourism, for one. There are also many jobs where you do not need top qualifications. If you build a small house in Switzerland today, the probability is high that the bricklayer is Portuguese or Macedonian. A healthy economy creates jobs. If you cannot fill them with domestic people, there is a need for foreigners.

So you should try to fill Swiss jobs with Swiss citizens first?

No, but the SVP goes even further. They say: priority for Swiss citizens, the people with the red passport. That would mean that someone could pay taxes here for decades, and then when there is a vacancy for a skilled worker, you would have to look first to see whether a Swiss citizen could be found. We had systems with quotas earlier, but they didn't work.

Why does the Swiss People's Party still want to do this?

You'll have to ask the People's Party. Sure, there are urban areas where it is difficult to find housing. You could say we'll restrict immigration, but you could also say that these are practical political issues that can be solved in other ways, by investing more in public transport infrastructure or housing projects.

Do the Swiss have racist tendencies?

No no, in Switzerland, there's not a single racist. They are all abroad. (Laughs) No, jokes aside. In every country there are racists. It is important to deal with the issues and find solutions. Business isn't accusing the People's Party of having a racist ideology or program. What we have here are symptoms that accompany strong economic growth. We are also willing to talk about solutions, but not by knocking off one of the main growth factor along the way.

What solutions then could there be?

What we can be sure of is that there are not only migration issues in Switzerland, but also in many of our neighboring countries. We are in contact with trade associations and politicians. We're monitoring the situation very closely. I can well imagine that in the future the EU will make adjustments to matters where Switzerland is not involved, especially in terms of access to social welfare. But on the whole, the idea of a single market means that people are free to move if they have an employment contract. The SVP wants to change this, and that's not compatible with our previous agreements with the EU. Political solutions will also be needed for transport infrastructure, regional planning, education and the pension system.

Swiss feel country is 'bursting at the seams'

Exit polls indicate the Swiss have voted to limit immigration to their country. DW spoke to Jan Atteslander of the Swiss Business Federation, who says the Swiss economy needs immigrants.

Does the German social welfare system contravene European law? The EU seems to think so. It has made a statement regarding the rights of migrants that has caused quite a stir in Germany. (11.01.2014)