The local council has fired its culture chief and said it will no longer fly the gay pride flag or allow headscarves in kindergarten. It's all part of a successful strategy to boost the Sweden Democrats' popularity. 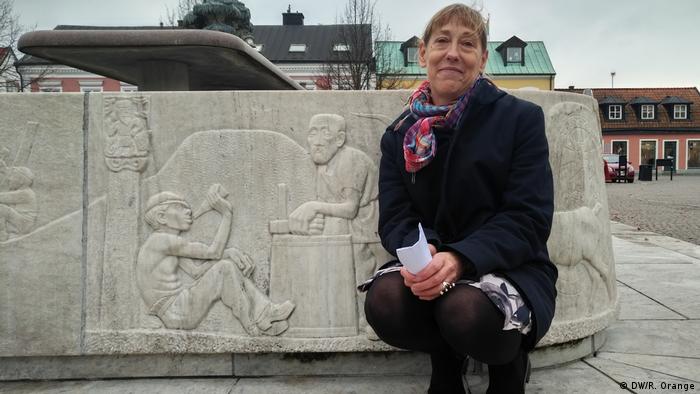 Sofia Lenninger, the person responsible for buying public art in the Swedish city of Solvesborg, starts off by insisting that, as a civil servant, she can't criticize the town government led by the far-right Sweden Democrats.

She takes me to the windswept harbor to see a granite "poetry generator" and points over to the towering concrete grain silo where artists once broadcast the Islamic call to prayer. But the council's controversial new ruling — that the public art it buys should be "traditional and timeless" and not "provocative" — is always there in the background.

"I think it makes everything a bit boring actually," she sighs, a hint of anger in her voice. "Uninteresting. What's the point, if you have to be aware of being provocative when dealing with art?"

Two days later, Lenninger is sacked. The city's top civil servant explains in a press release that they had disagreed on her role and responsibilities as head of the local culture department.

Louise Erixon, the fiancée of the Sweden Democrats' charismatic leader Jimmie Akesson, has just spent a year as mayor of Solvesborg, which, with barely 10,000 people, qualifies as a city due to its history rather than its size.

And she is already generating headlines across the Swedish national media. Erixon (left) has been mayor of Solvesborg for the past year. Her partner is head of the Sweden Democrats, Akesson

"There's a big division between what the general public thinks is beautiful and interesting and what a tiny cultural elite thinks is exciting," Erixon explained in mid-October, when she was given a high profile slot on Swedish Radio's weekly interview show. "We do not believe that challenging contemporary art or provocative contemporary art fits in a town square or in a school."

To give an example of what she meant she pointed to cartoons of menstruating women by the artist Liv Strömquist displayed on the Stockholm Underground.

The new cultural policy has caused a stir among exactly the kind of "cultural elite" Erixon was targeting.

Gitte Orskou, the head of Moderna Museet, Stockholm's main modern art gallery, called it "creepy" and "absurd" and likened it to 1930s Germany, "where that which was not approved of by the political establishment was called 'degenerate art.'"

Part of the reason for the attention is that in addition to being led by his girlfriend, Sölvesborg is Jimmie Akesson's home town.

It's where the leader of the Sweden Democrats grew up, where he lives when he is not in Stockholm, and where the party holds its annual summer festival (Akesson himself plays the keyboards with one of the bands).

But the rejection of "provocative" art is only one of a string of divisive policies in a 220-point program the Sweden Democrats have agreed with their coalition partners, the Moderate, Christian Democrat and local SoL parties.

The program includes a decision to no longer fly the gay pride flag from the council offices and a ban on children wearing headscarves in kindergartens.

All three are little more than gesture politics: The rainbow flag was only ever hoisted once a year; no young children in the town wear the hijab; and Lenninger says she can't think of an occasion when the city has had to choose between "provocative" and "timeless" art.

"I think it is fair to assume that there is a national strategy behind it," says Anders Sannerstedt, senior lecturer at Lund University. "What happens in Solvesborg is not random: It's very much in accordance with the wishes of the national party board and the party leader."

Whatever the strategy is, it appears to be working. Last week, a poll for the Dagens Nyheter newspaper gave the party its highest national support ever, putting it just one percentage point away from overtaking the Social Democrats to become the country's leading party. Last week, Akesson was on national television saying he was "as ready as he could possibly be" to become prime minister.

As well as getting a reaction nationally, the policies have galvanized Solversberg's liberals and artists as never before.

You can see rainbow flags fluttering all over the town, stuck in the windows of houses and shops, hanging off roofs and hoisted on flagpoles outside company offices.

One of them belongs to Elisabet Svensson, a ceramicist and painter who was one of the last local artists to get a public commission. She says she wanted to protest the "very, very stupid decision to start a conflict about this pride flag."

"I'm sorry for them because they have no education. They don't know what they are doing," she argues when we talk about the art ruling. Alfred Appelros, a 24-year-old local advertising entrepreneur, has been flashing the flag regularly on the digital billboards he controls across the town.

"We said that we have a responsibility as owners of one of the biggest media channels here to say our piece," he said. "The pride flag for us means that everyone has equal value, and we want people to be able to love whoever they want."

Just over a fortnight ago, more than 400 people gathered in the town's main square to demonstrate for equal rights, freedom of expression and free culture.

Next May, thousands of queer people from across Sweden will descend on the city for its first-ever gay pride march.

The question is whether all this represents an unwelcome backlash for the Sweden Democrats' strategists, or whether it's exactly what they intended.

Opinion: The far-right twist in the Swedish fairy tale

The illusion is over for Sweden: The poster child of the social-democratic welfare state is just a country like any other. It will have to get used to new coalitions and a harder political tone, writes Barbara Wesel. (10.09.2018)

Sweden's populist, anti-immigration party is expected to win as many as one in five votes when the country goes to the polls on Sunday. But can it escape its neo-Nazi tag? Richard Orange reports from Malmo. (08.09.2018)