Sweden faces weeks of a stalemate after its traditional center-left and center-right blocs tied, with neither holding a majority. The far-right made gains on a hard-line anti-immigration platform. 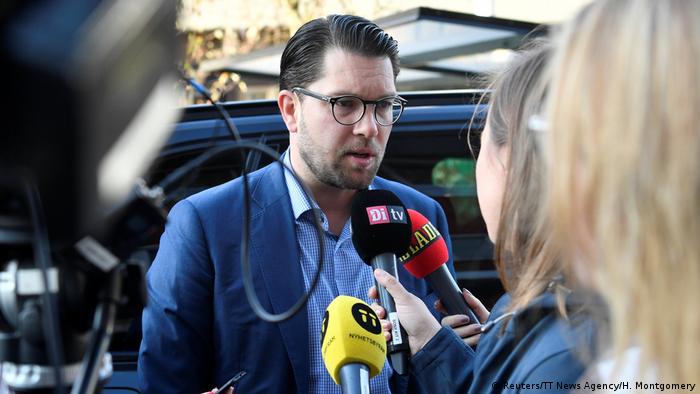 The parliamentary election was one of Sweden's most important because the far-right, anti-immigration Sweden Democrats — who rose from the white supremacist and neo-Nazi fringe — were expected to gain significant strength and change the landscape of Swedish politics.
Read more: Sweden's general election results in stalemate as far-right support surges

Read more: Opinion: The far-right twist in the Swedish fairytale

Cold shoulder for the far right

"Voters made the Social Democrats Sweden's biggest party," Prime Minister Stefan Lofven said. "We need a cross-bloc cooperation." He said he would stay in his post for the next fortnight until the new parliament opens.

Parliamentary group leader Anders Ygeman said "it could take weeks, maybe even months," before Sweden has a government in place.

"The Alliance will not govern or discuss how to form a government with the Sweden Democrats," said Ulf Kristersson, head of the Moderates. "In some sense we're happy the Sweden Democrats didn't grow more than they did," said the Liberal lawmaker Allan Widman.

The opposition Alliance bloc — comprised of the Moderates, Centre, Liberals and Christian Democrats — scored 40.3 percent of Sunday's vote. It would achieve a majority if it were to team up with the Sweden Democrats; however, the Centre and Liberals would likely not agree to join with the far right. Sweden Democrats leader Jimmie Akesson invited the other two parties to formal negotiations, but was rejected.

The left-wing alliance — made up of the Left Party and the governing Social Democrats and Green Party — emerged with 40.6 percent of the vote. The bloc's leader, Prime Minister Stefan Lofven, also refused to cooperate with the far right.

Analysts said that it will be difficult to form a stable government without some kind of support from the Sweden Democrats unless the blocs break away from their traditional alliances. Parliament opens on September 25. If the prime minister is ousted after a mandatory vote on whether to replace him, the speaker is permitted to give a maximum of four PM candidates the opportunity to form a government. If they all fail, fresh elections will be called.

Sweden faces weeks of a stalemate after its traditional centre-left and centre-right blocs tied with neither holding a majority. The far-right made gains on a hardline anti-immigration platform. (10.09.2018)