Sweden's center-right and center-left blocs have fallen short of a majority. The far-right Sweden Democrats have seen a boost in support amid concerns over immigration in the Scandinavian country.

The far-right, anti-immigration Sweden Democrats, who rose from the white supremacist and neo-Nazi fringe, initially saw their share of the vote go from 12.9 percent in 2014 to 17.6 percent in the election. They had been expressing hopes of a result far higher, but it still represents the largest gain by any party in the Riksdag.

The official results were issued two weeks later on Sunday, September 16. They showed Prime Minister Stefan Lofven's Social Democrats with 28.3 percent, the center-right Moderate Party with 19.8 percent and the Sweden Democrats with 17.5 percent.

The result translates to 62 parliamentary seats for the Sweden Democrats, up from 49 seats in 2014. Party chief Jimmie Akesson told members: "We will gain huge influence over what happens in Sweden during the coming weeks, months and years."

Both Lofven's Social Democrats, the Greens and the Left Party bloc as well as the opposition center-right Alliance won around 40 percent, well short of the required majority.

The prime minister's party lost 13 seats in parliament – its worst result in a century. Meanwhile, the junior coalition Green Party even saw its support fall dangerously close to the 4 percent threshold for participation in the parliament. They took 4.4 percent.

Social Democrat Prime Minister Stefan Lofven said he would stay in his post until the new parliament opens.

"The voters have made their choice, now it's up to all of us decent parties to wait for the final result and then negotiate (and) cooperate to move Sweden forward in a responsible way," Lofven said. He would "work calmly as prime minister with respect to the voters and Sweden's electoral system."

He called on the centrist Alliance to discuss a "cross-bloc cooperation."

With just 30,000 votes separating the two groups, the 300,000 votes from Swedes living abroad and those who voted late will be key. They will only be reported on Wednesday.

For his part, Lofven expressed disappointment: "I'm of course disappointed that a party (the Sweden Democrats) with roots in Nazism can win so much ground in our time."

Akesson and his party had made much of its opposition to Sweden's immigration policy, which saw 163,000 asylum-seekers arrive in the country in 2015. While the number of asylum-seekers has dropped since, concerns over pressure on the welfare system, a shortage of doctors and teachers and a rise in some kinds of crime have been main election issues. 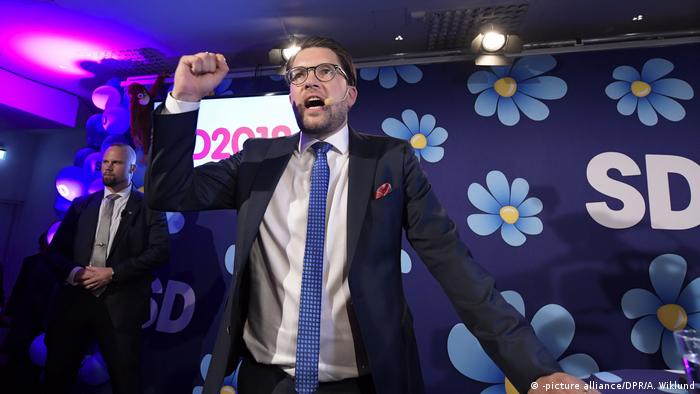 Center-right Alliance leader Ulf Kristersson called on Lofven to resign, but pushed back against any idea of an alliance with the far-right.

"We have been completely clear during the whole election," Kristersson said of his four-party grouping. "The Alliance will not govern or discuss how to form a government with the Sweden Democrats."

The speaker of parliament is expected to consult party leaders and ask the one most likely to succeed to then form a government.