After Sweden's most important election in decades, first results show the center-left and center-right blocs are neck-and-neck. The far-right Sweden Democrats have made significant gains to hold third place. 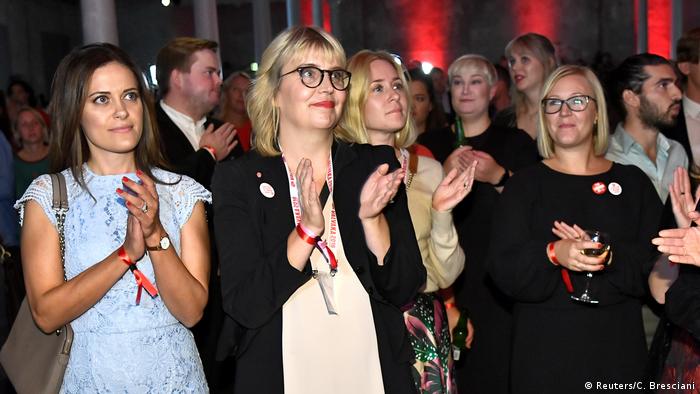 2250: Social Democrat leader and Prime Minister Stefan Lofven said he would calmly work as premier over the next two weeks. He said regardless of the final outcome, the election should be the funeral for bloc politics.  "The voters have made their choice, now it's up to all of us decent parties to wait for the final result and then negotiate (and) cooperate to move Sweden forward in a responsible way."

2150: With 84.5 percent of votes counted, the Social Democrats have 28.3 percent, according to SVT reports, the Moderates 19.8 percent and the Sweden Democrats 17.6 percent.

2130: The 300,000 votes from Swedes abroad, and people who cast their ballots late may play a key part in the result, which looks like it is going to be very close. The final tally will only be announced on Wednesday.

2110: As votes continue to be counted, the Social Democrats retain their lead but with a share reduced from the 31 percent they took in 2014, according to SVT television. Their alliance partners, the Greens, have also seen their share down from 6.9 percent in 2014 to only just above the 4 percent threshold needed to win seats in the Riksdag.

2010: Half of the votes have been counted: Here are the latest percentage figures, according to Sweden's SVT public broadcaster:

2000: "Sweden, birthplace of multiculturalism and model for the left, has finally decided to change after years of wild, uncontrolled immigration," Italy's far-right interior minister, Matteo Salvini, said on Twitter. "Now they are also saying 'no' to this Europe of bureaucrats and speculators, 'no' to illegals, 'no' to Islamic extremism."

1945: Green Party MP Maria Ferm has told Radio Sweden her party risks falling below the 4 percent threshold needed to have a seat assigned in the Swedish parliament. An SVT exit poll put the Green Party at 4.2 percent of the vote.

1930: SVT has announced the Swedish Democrats got 41 percent of the vote in the district of Stalldalen. Meanwhile, the country's election commission website is down, reportedly because of heavy traffic.

1800: An exit poll by SVT put the center-left Social Democrats in first place with 26.2 percent of the vote. The Sweden Democrats in second place with 19.2 percent, and the Moderates at 17.8 percent. The final results are expected before midnight (2200 UTC).

1730: Some 38 percent of Swedes decided who they would vote for today or during the last week, according to a ValU exit poll by public broadcaster SVT. While 41 percent said they have changed their vote since the last parliamentary elections four years ago.

1620: Members of the Nordic Resistance Movement (NMR), a right-wing extremist group, reportedly entered polling stations in Boden, Ludvika and Kungalv. They tried to take photos of voters, ballot papers and journalists, according to the Svenska Dagbladet newspaper.

1520: Opinion polls suggest the far-right Sweden Democrats could garner between 16 and 25 percent of the vote. That would make it one of the biggest parties, also making it difficult to predict the make-up of the next government.

1400: Latest opinion polls suggest the ruling center-left Social Democrats, led by Prime Minister Stefan Lofven, will lose a substantial number of parliamentary seats, but that they would still win ahead of the far-right, anti-immigration Sweden Democrats whose popularity has steadily risen since the last election in 2014.

1240: This will be the first election since Sweden's government in 2015 allowed 163,000 migrants into the country. While far less than what Germany took in that year, it was the most per capita of any European nation. Roughly 7.5 million registered voters will choose from almost 6,300 candidates for a four-year term in the 349-seat Riksdag, or parliament. It's highly unlikely that any single party will manage to get a majority, or 175 seats.

1140: One voter, Vicki R., who lives outside of Stockholm in one of the wealthiest areas of the country, told DW she finds that there is a lot of support for the Moderates and noted that while Sweden always has high voter turn out, voters also turn out for local issues and that could push voter turn out even higher today.

0830: Prime Minister Stefan Lofven has cast his ballot and shared a few words with the press. "This election is about decency, and we stand for decency," he said before once again dismissing the Sweden Democrats as a racist party.

0730: Liberal Party leader Jan Bjorklund and the Center Party's Annie Loof have reiterated that they will not go into negotiations with the far-right Sweden Democrats (SD) following Sunday's vote. A high vote for the SD, which is expected to claim around 20 percent, could see it have a huge bearing on who ultimately comes out on top. Speaking to Swedish public broadcaster SVT, Loof did admit that the center-right Alliance might need to win the backing of at least one of the left-wing parties if it is to get into power.

0615: Around 7.5 million people are eligible to vote today and turnout is traditionally high in Sweden, hitting 85.8 percent in 2014. More than a quarter of voters remain undecided going into Sunday's vote, according to a Sifo poll published on Wednesday.

0600: Welcome to Deutsche Welle's live coverage of the Swedish elections. Polls opened at 8 a.m. local time (0600 UTC) Sunday and voting will continue until 8 p.m., when the counting of ballot papers begins. The first preliminary results are expected to be released between 10 p.m. and 11 p.m.