Around 30 million Christmas trees were sold in Germany last year. But as farmers keep planting the evergreens to meet demand, the German government is concerned about the impact of monoculture on the country's forests. 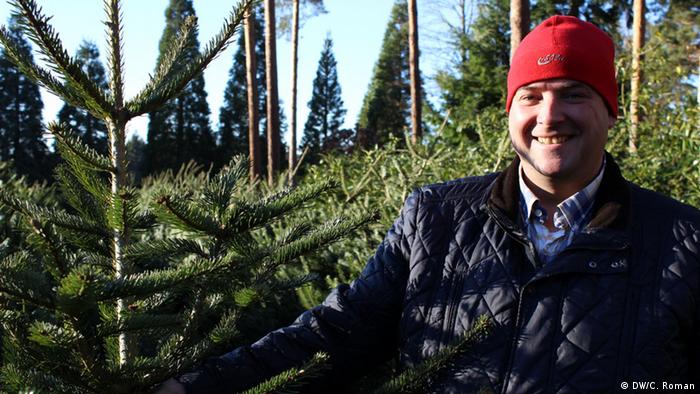 Just above the banks of the river Rhine, near the western German city of Bonn, farmer Hubertus von Groote walks through a patch of forest, looking for the right trees to harvest. Evergreen varieties popular at Christmas time, like the blue spruce and Nordmann fir, are growing side by side with taller beech trees and oaks, a mixture of species which von Groote has planted together to help keep the forest healthy.

"What we have here is a mixed forest, so young and old trees are growing together and each tree gets the space and everything it needs to grow," he explains. "That's the opposite of a monoculture, but it's the best way to get the greatest possible variety of plants and animals too."

In many plantations in Germany, Christmas trees are planted as a monoculture crop. When just one variety is planted in one place, the crop loses the natural protection of other species around it, becoming more vulnerable to harsh weather, and increasingly susceptible to pests. Crops planted in this way often need pesticides to protect them.

But von Groote's plantation is diverse. He points at a patch of young spruces, which will be harvested in five years. They are surrounded by cherry trees, which protect the spruce saplings from strong winds and rains. "Until now, we've never had to spray pesticides," he says.

"We have different types of Christmas tree in each plot, and the plots aren't big - they're surrounded by the mixed forest, so we also have useful plants and creatures in nature that work against the pests - and those pests can't spread out as they would do with monoculture. That's why we've never needed to spray." 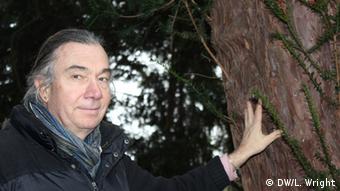 According to botanist Wolfram Lobin, curator of the botanical gardens in Bonn, the damage caused to Germany's forests by planting non-native species in monoculture is not a new problem. "For hundreds of years in central Europe, coniferous trees like spruce, like fir, like pines, are planted in monoculture in very big areas," he told DW. "These are in the wrong sites - in North Rhine-Westphalia probably not one coniferous species is natural, all are introduced. So they do quite well, but they are sensitive to all catastrophes that could happen like diseases, or like fire or storms, and in the last four decades we had all of these catastrophes in Germany."

Officials in this part of Germany want to see more plots like von Groote's. The government of North Rhine Westphalia recently passed a law to prevent the large-scale production of Christmas trees - effectively banning monoculture plots. Areas larger than two hectares will now be regulated in order to protect the region's woodland. Lobin hopes the new law will restore balance in the country's forests. "We will have a greater diversity on all levels, we will have more natural landscape, we will have less effect from wind and fire and diseases," he says.

As Christmas Day draws closer, the farmhands in von Groote's forest have their work cut out for them. They chop down the trees and carry them into a lot where customers can choose which one to take home. Every year, only certain trees are cut from each plot, leaving more room for the others to continue growing. "The disadvantage of this kind of cultivation is that it's a lot of work," says von Groote. "You can't do it with machines as you would in monoculture plots. But for us it's worth it." 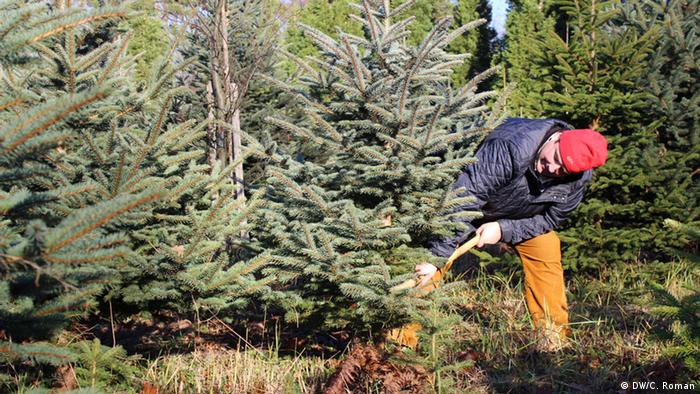 A sustainable approach like von Groote's makes real trees an environmentally friendly option for Christmas. While growing, they help to lock carbon dioxide in the soil and create natural habitats. Most artificial trees are made from PVC, contain lead and are sprayed with chemical flame retardants. A huge amount of carbon dioxide is needed to produce, transport and dispose of artificial trees, and they can take hundreds of years to decompose.

Von Groote couldn't imagine having an artificial tree for Christmas. "And growing and selling Christmas trees to nature lovers helps," he points out. "The hiking paths through here aren't subsidised. This isn't a publicly owned forest - it's private. So absorbing costs or covering them partly through Christmas trees works for us. But we wouldn't do it if it wasn't so ecological."

Von Groote is convinced that if it's done responsibly, selling freshly cut Christmas trees is the right thing for his forest. With the scent of citrus and pine thick in the air, he picks up the chainsaw and makes his way back through the trees. For private woodland like this, Christmas tree farming is helping to ensure these forests have a future.

Extreme flooding devastated communities along Germany's Elbe River half a year ago. Floods wiped out local fish populations, affecting tourism and livelihoods. But locals are now working to restore the region's lakes. (19.12.2013)

Listen to the report on sustainable tree farming