Sushant Singh Rajput′s death: The dark side of India′s glamorous film industry | Asia | An in-depth look at news from across the continent | DW | 16.06.2020

The critically-acclaimed Indian actor recently died in a suspected suicide. Rajput's death has unveiled the issue of depression in India's entertainment industry, where many actors must compete under intense pressure. 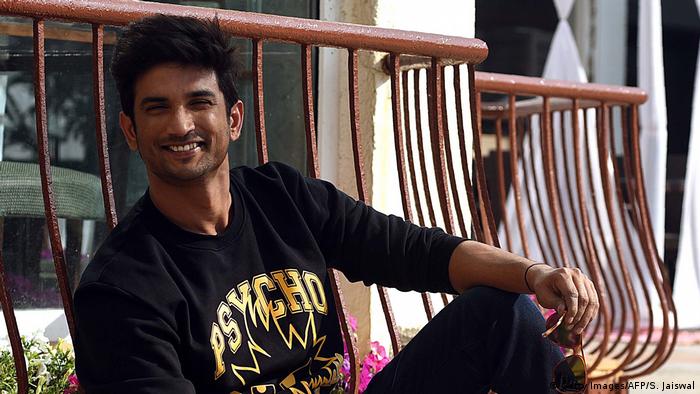 Sushant Singh Rajput, 34, a prominent Bollywood star who secured lead roles in blockbuster hits including Kai Po Che, MS Dhoni: The Untold Story and Chhichhore, was found hanging at his south Mumbai home over the weekend.

The loss of Rajput comes just days after the death of his former manager, 28-year-old Disha Salian. According to local media reports, Salian died after falling off the 14th floor of a building in Mumbai. Investigations are still ongoing whether Salian's death was suicide or an accidental death.

The recent string of deaths in India's film industry has raised disturbing questions of the darker side of the seemingly glamorous world of Bollywood. Film and television actor Kushal Punjabi died in his Mumbai residence in December last year. The cause of death was reported to be suicide by hanging. Other actors, including Pratyusha Banerjee, Jiah Khan, Kunal Singh, Sai Prashanth and the iconic actor-director Guru Dutt, have all allegedly died as a result of suicide.

"The cinema world is not exempt … Many face depression, stress, anxiety or severe mental disorders," Psychiatrist Anjali Nagpal told DW. "Everyone has different coping mechanisms, some don't want to express themselves and some don't have ways to deal with their isolation," Nagpal explained.

In May, actor Preksha Mehta was found dead in her home in Indore, Madhya Pradesh state. According to local media, the actor suffered from depression. Her mental health reportedly deteriorated after struggling to secure work post-COVID-19 lockdown.

In an apparent suicide note, Mehta expressed disappointment in her career and what she reportedly described as failed relationships.

Mental health experts have warned that the global coronavirus pandemic and related lockdowns have exacerbated suicidal tendencies among individuals.

"This lockdown has opened up a Pandora's box. It has had a massive impact on the lifestyle of people and produced a fertile breeding ground for self-harm," Gorav Gupta, a renowned psychiatrist, told DW. The New Delhi-based psychiatrist said people find it even more difficult to reach out during the ongoing pandemic due the lack of available resources and the stigma attached to seeking help.

Gupta said he has received an influx of patients in the last two months during the COVID-19 lockdown, saying that the spike is not unusual given that many have been forced to stay indoors with limited access to resources.

"People suffered significant to extreme emotional pain, regardless of the source of such pain. It takes a lot to step out and talk about it, especially if one is a celebrity," Gupta said.

'A jungle of ambitions'

Hindi cinema — globally dubbed Bollywood — is one of the world's biggest film industries and known for creating the most number of films per year.

Those that work in the industry and aspiring actors have often described Bollywood as fiercely competitive — whereby self-worth often depends on securing the next big role and maintaining a public profile.

"It's neither an industry nor a corporate house. It's a jungle of ambitions where everyone wants to grow taller than the other. But a forest becomes a forest only when all trees co-grow," film director Vivek Agnothotri tweeted.

In addition to the added pressure due to the nature of the entertainment industry, clinical psychiatrist Rajiv Sharma said that some actors could become susceptible to allowing their emotions consume them entirely when playing certain roles. "There have been instances when acting techniques can encourage harmful thought processes. Some may have problems getting rid of them," said Sharma.

Rajput's death has shaken the world of Bollywood, with prominent Indian actors speaking out and encouraging those in the industry to facilitate open dialogue on issues concerning mental health.

"The industry now feels more open to dialogue around mental health. The shift is slowly happening but there is still a long way to go before we can express these feelings. Many still see it as a stigma," a south Indian actor told DW on condition of anonymity.

Veteran actor Anil Kapoor said the news of Rajput's death was "shocking and incredibly heartbreaking." He appealed to those in need of help to reach out to somebody they trust.

"If you feel like you're drowning please, please, please reach out to someone you trust, whether that is a friend, family member or a professional," the actor tweeted.

Deepika Padukone, one of India's highest paid actors, came out publicly in 2015 about her battle with depression. She is the founder of the Live Love Laugh Foundation, which aims to raise awareness on mental health in India.

"As a person who has had a lived experience with mental illness, I cannot stress enough about the importance of reaching out. Talk. Communicate. Express. Seek help. Remember, you are not alone. We are in this together. And most importantly, there is hope," Padukone posted on social media following Rajput's death.

If you are suffering from serious emotional strain or suicidal thoughts, do not hesitate to seek professional help. You can find information on where to find such help, no matter where you live in the world, at this website: befrienders.org.