An estimated 1,000 queer-identified people in Germany undergo "conversion therapy" every year. But the practice may soon be banned. During LGBTQ Pride Month, DW spoke to Mike F., who underwent the controversial therapy.

From a young age, Mike F. knew that he was gay. But growing up in close Evangelical Christian circles made accepting his sexuality nearly impossible.

"I think I first became aware that something was different during kindergarten," Mike told DW. "But, of course, I didn't know what it meant."

For years, Mike was reluctant to share his feelings toward boys and chose to hide his sexuality until, at the age of 16, he had his first sexual encounter with a man.

"That was a nice time of life. But then the conflict started to grow," Mike said. Growing up in Bad Homburg, in southwestern Germany, Mike was an active member of a local Christian youth club, which heavily influenced his moral outlook on the world. 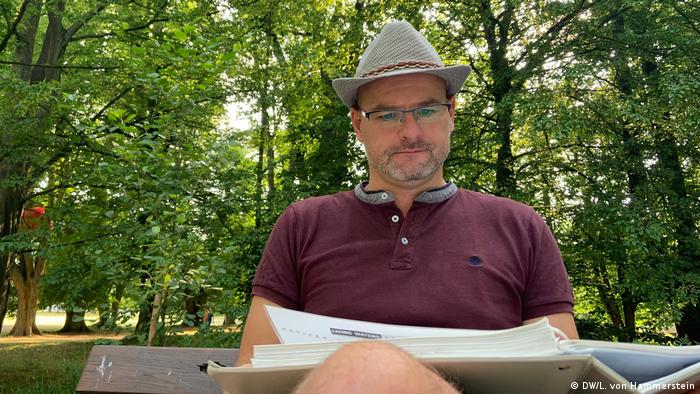 During his "conversion therapy," Mike F. ended all contact with queer-identified friends

"I felt at home in Christian circles, where it was made very clear: 'God doesn't want that. You should lead another life. How are you supposed to come before God? This is a mortal sin,'" Mike said.

By the age of 21, Mike chose to undergo "conversion therapy," which seeks to effectively repress a person's sexuality. It is often used on children and teenagers. Methods such as electroshock therapy and aversive conditioning techniques are considered mentally abusive by medical professionals.

"I was convinced that if you pray hard enough, and commit yourself enough, things would change," Mike said.

On beginning his "therapy," Mike committed himself to ending all contact with queer-identified friends and partners. For a decade he was abstinent. The loneliness brought him to the brink of suicide.

"I reached the point where I couldn't go on anymore," Mike said. But it was the suicide of a close friend, as well as his deep Christian faith, that prevented him from ending his life.

"I thought that, if I'd have gone ahead, then I wouldn't have been granted eternal life," he said. "Today I can laugh about how stupid that is. But that was the reason that kept me from ending my life."

Mike's story isn't an anomaly in German society. According to the Magnus Hirschfeld Foundation, there are at least 1,000 cases of conversion therapy a year in Germany, not just by religious leaders but also psychotherapists.

Practitioners in Germany currently face no consequences for carrying out "conversion therapy." But Health Minister Jens Spahn is on the way to taking drastic action: He wants to ban the practice by the end of 2019.

"Homosexuality is not a disease and does not require treatment," Spahn told media earlier this year.

Like many critics, Mike worries that, even with a ban, "conversion therapy" would continue under a different guise. But he said it was a step in the right direction.

"I think it's important, for example, to put a ban in place for young people that makes it clear: Doctors and therapists are not allowed," Mike said. "Then there will be a lot less of this nonsense."

For now, Mike can put the past behind him, and look forward to making the final preparations for his August wedding — something unimaginable to him 20 years ago.

"I'm not bitter towards anyone," Mike said. "Neither the Christian circles where I learned and heard everything nor the therapist. Someone from my former parish reached out to me and said — hats off to him — he was sorry for what happened. So I can see something is happening. Change is on the way."