Thousands of animals, most from Romania, have been caught up in the Suez Canal blockage. Authorities are optimistic that a high tide could help to refloat a freighter that has been wedged across the waterway for days. 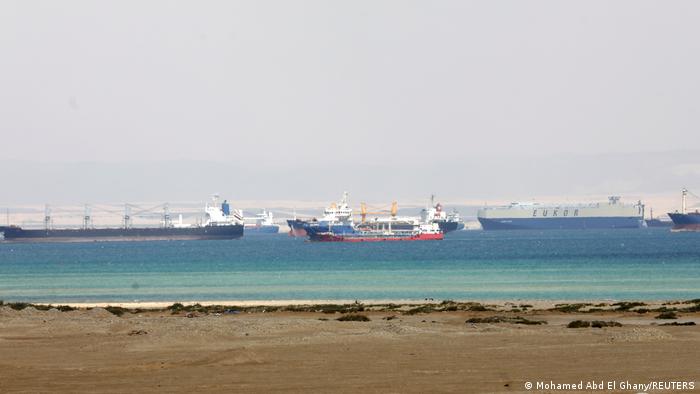 Suez Canal authorities were optimistic that Sunday's high tide would help refloat the Ever Given freighter as animal advocates raised concerns for sheep stuck on some 20 livestock ships in the logjam.

Authorities have been working to free the giant vessel since Tuesday, when it ran aground in the canal and blocked the crucial shipping route in both directions.

Animals International announced that thousands of animals — mostly sheep on 13 vessels from Romania — were at risk of dying if the channel did not reopen in the "next 24 hours."

"We are sitting in front of a major tragedy," said Gabriel Paul of the nongovernmental group, forecasting that delayed livestock carriers, including vessels from Spain, could run out of water and fodder. 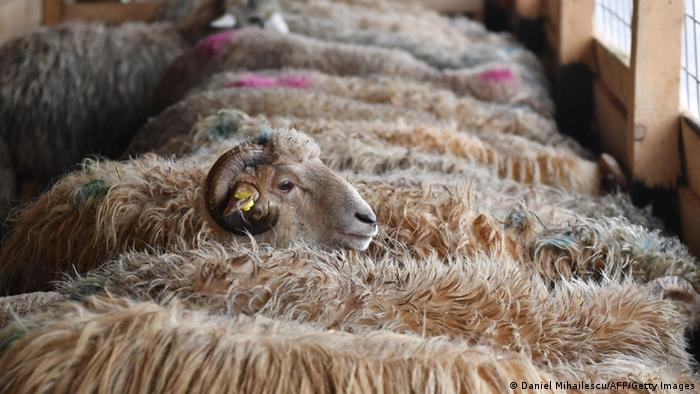 At both ends or headed for Suez were at least 20 such carriers, the Guardian reported. Animals International urged nations to call their respective livestock ships back.

On Thursday, Spain had given orders that no animal ships bound for Saudi Arabia and Jordan be loaded, the Guardian reported.

Romanian veterinary authorities said they had assurances from transport firms that their livestock ships had enough fodder and water "for the coming days."

Egypt's Agriculture Ministry was quoted by the state-run Al-Ahram website as reporting that veterinary teams had been sent to livestock stuck offshore. 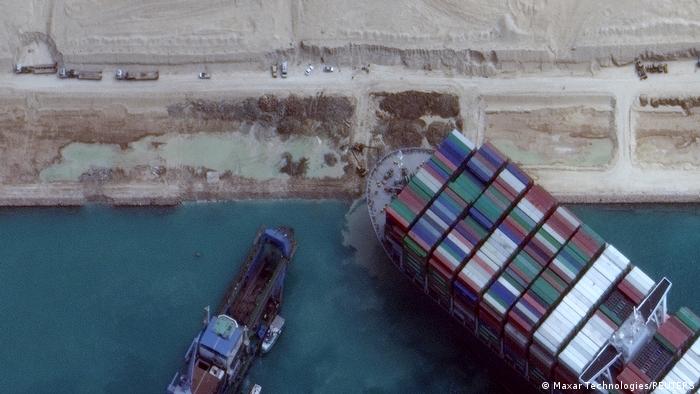 Efforts are underway to dislodge the Ever Given freighter, which ran aground on Tuesday

Salvage teams alternated between dredging and tugging around the stranded Ever Given on Sunday, but sources said rocks under its bow complicated efforts.

Salvage experts, equipped with 12 tugs, were pinning hopes on a high tide to refloat the vessel, which is wedged diagonally and blocking the waterway to more than 300 ships waiting at both ends.

On Sunday, the French shipper CMS-CGM announced that two of its Asia-bound vessels were rerouted and it was considering air and rail alternatives for some clients.

Though Egypt has lost $12-14 million (€11-12 million) in charges each day, the German insurer Allianz put the daily cost in global trade disruption at $6-10 billion.

The Suez Canal blockage was "the straw that breaks the global trade's back," Allianz reported in a study published Friday, referring to supply chains.

"First, suppliers' delivery times have lengthened since the start of the year and are now longer in Europe than during the peak of the COVID-19 pandemic," according to the insurer.

About 15% of world shipping traffic normally transits the 193-kilometer (120-mile) Suez Canal, which connects the Mediterranean and Red seas, linking Asia and Europe.

A giant container ship blocking the Suez Canal has put the vulnerabilities of global trade center stage. DW looks at the major shipping routes most at risk from unforeseen events.