The Doctors Committee said two people have been killed by authorities. Sudan's military leader has vowed to crack down on protesters demanding civilian rule, saying they "would not achieve a political solution." 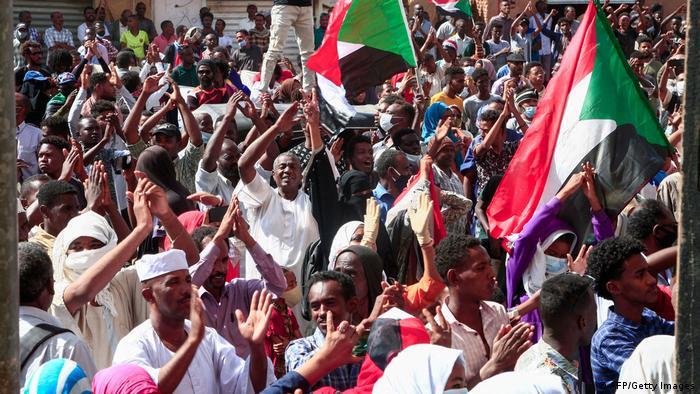 Authorities had set up roadblocks, but protesters still gathered in Khartoum

The first man, who was in his 20s, died in the capital, Khartoum due to head injuries. A second man later died of gunshot wounds to his chest in the city of Omdurman.

Televised images showed the gas canisters being deployed as demonstrators marched toward the presidential palace in the 12th round of major protests since a coup on October 25.

Large numbers of security forces were deployed ahead of the expected rally in memory of those killed during previous protests.

Agence-France Presse reported that roadblocks had been set up in Khartoum, where soldiers in armored vehicles mounted with heavy machine guns were posted.

All bridges across the Nile River that directly connect Khartoum with its suburbs were also closed, a witness told the Reuters news agency.

Web monitoring group NetBlocks said mobile internet services, which activists rely on for organizing and sharing live footage of the rallies, were cut from mid-morning.

Sunday's protests come after six people died and hundreds were injured in nationwide demonstrations against military rule on Thursday.

The demonstrations erupted after the military took power two months ago, sparking a crackdown by security forces that killed 56 people and injured hundreds more, according to the Doctors Committee, which is part of the pro-democracy movement.

The coup ended a power-sharing deal with civilian political forces that had was agreed in 2019 when autocrat Omar al-Bashir was ousted following separate protests.

The latest protests have continued even after Abdallah Hamdok was reinstated as prime minister last month.

Demonstrators say they distrust veteran General Abdel-Fattah Burhan — the de facto leader since the ouster of Bashir and his promises to guide the country toward full democracy.

They have demanded the military play no role in government during a transition to free elections, and are seeking justice for the dozens killed since the coup as well as for the more than 250 who died during the 2019 protests.

Al Hadath TV quoted an adviser to Burhan as saying the military would not allow anyone to pull the country into chaos and that continued protests "would not achieve a political solution."

Sudan's Sovereign Council, which Burhan leads, on Friday denounced the violence, adding it had ordered authorities to take all legal and military measures to avoid a recurrence. It said "nobody will go unpunished."

Last week, the council reinstated powers of arrest and detention to the intelligence service.

Meanwhile, Sudanese activists have condemned sexual attacks during the December 19 protests, in which the United Nations said at least 13 women and girls were victims of rape or gang rape.

The European Union and the United States issued a joint statement condemning the use of sexual violence "as a weapon to drive women away from demonstrations and silence their voices."

Over 14 million people, one in three Sudanese, will need humanitarian aid next year, according to the UN Office for the Coordination of Humanitarian Affairs, the highest level for a decade.