Armed groups have killed at least five protesters at a sit-in outside the military headquarters in Khartoum. Earlier, the opposition and the military council reached a deal on the country's future governing structure. 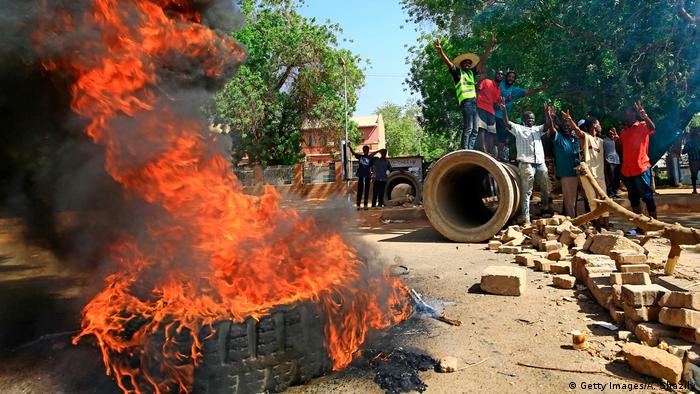 At least five protesters and a member of Sudan's army were reportedly killed on Monday as violence erupted outside the military headquarters in the capital, Khartoum.

The violence took place after opposition groups and the military council struck a deal for the country's political transition, following the ouster of President Omar al-Bashir last month.

Since then, protesters have been camping outside the military headquarters to support a civilian-led political transition.

It remains unclear which group attacked the protesters. The military council said the attackers belonged to armed groups who were unhappy with the political deal's progress.

Protesters, on the other hand, said military elements linked to al-Bashir's former regime were to blame.

Read more: Sudanese military: A pawn of the Saudis?

"Some unidentified elements who wanted to spoil negotiations between the two sides tried to enter the sit-in... and gunshots were fired that led to the killing of a major from the military police," the military council said.

The doctors' committee linked to Sudan's protest movement said a young man had been shot in his chest by "the ousted regime militias who attempted to disperse the Sudanese peoples' sit-in."

The man who captured Sudan's uprising

The man who captured Sudan's uprising

Prior to the clashes, Taha Osman, a spokesman for the protest movement, told the Agence France-Presse news agency that a deal had been reached on "the structure of the authorities and their powers."

"The authorities are as follows: the sovereign council, the cabinet and the legislative body," he said.

Osman added that another meeting was scheduled for Tuesday "to discuss the period of transition and the composition of the authorities."

The military council also confirmed that the deal had been reached. "We agreed on forming the transitional authority on all three levels," council spokesman Lieutenant General Shamseddine Kabbashi told reporters.

"Tomorrow we will continue to discuss the percentage of participation... and the transitional period," he said.

Disagreement exists on that issue, with the generals insisting the transitional period last two years. Protesters want it to last four years.

Earlier Monday, Sudan's prosecuting authority charged al-Bashir for his role in protesters' deaths during the uprising.

Prosecutors will also investigate a case of money laundering against the ousted president after large amounts of cash in various currencies were found in his home, state agency Suna reported.

Protesters in Sudan have threatened acts of civil disobedience after the army partially rejected proposals for civilian rule. Demonstrators believe the army is delaying the transition to a civilian government. (09.05.2019)

Sudan's ruling military council is calling for protesters' roadblocks to be removed. Protest leaders are demanding a transfer of power to a civilian administration. (22.04.2019)

Hundreds of thousands of Sudanese citizens have responded to calls for a million-strong march. Organizers seek to force military leaders to hand over power to a civilian government. (25.04.2019)