Protesters in Sudan have threatened acts of civil disobedience after the army partially rejected proposals for civilian rule. Demonstrators believe the army is delaying the transition to a civilian government. 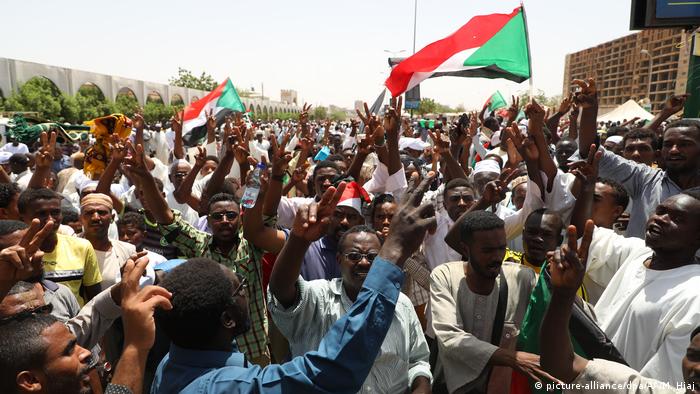 Protest leaders in Sudan on Wednesday threatened to launch a nationwide civil disobedience campaign in reaction to the military's "disappointing" response to their proposals for a civilian government.

Thousands of protesters remain camped outside the military headquarters in Khartoum almost four weeks after the armed forces ousted autocratic president Omar al-Bashir as demanded by a monthslong protest movement.

"We call for and prepare for civil disobedience," Madani Abbas Madani, a leader of the Declaration of Freedom and Change Forces (DFCF), said at a news conference in Khartoum.

The DFCF, the opposition groups' umbrella body, did not provide details of the action it might take. The group has organized work strikes, marches, protest sit-ins and other acts of civil disobedience for weeks. Protesters have also blocked bridges, roads and rail tracks, disrupting Sudan's transport infrastructure.

The protesters and the military have been in talks to determine whether an overall ruling council that would replace the existing army council — made up of only generals — should have a civilian or military majority.

Read more: The Sudanese military: A pawn of the Saudis?

Faces of the protests in Sudan

Protests in Sudan – faces of the revolution in Khartoum

Military 'has reservations' about civilian rule

Last week the Alliance for Freedom and Change protest group handed over its proposals for a civilian structure, including executive and legislative bodies, which it eventually wants to rule Sudan after replacing the generals.

The 10-member military council said late on Tuesday that while it agreed to the overall proposals, it had "many reservations."

The protest leaders said on Wednesday that they believe the military council was delaying the entire transfer of power.

"The military council's response to the proposals of the Alliance for Freedom and Change was disappointing and risked putting the country in jeopardy," protest leader Khalid Omar Yousef told reporters.

The alliance expressed concerns about the military dragging the process out.

The art of graffiti in Sudan

Sudan: Using graffiti to pay tribute to the uprising

US urges army to make a deal

In a telephone call with Burhan, Sullivan backed "the Sudanese people's aspirations for a free, democratic and prosperous future," the State Department said.