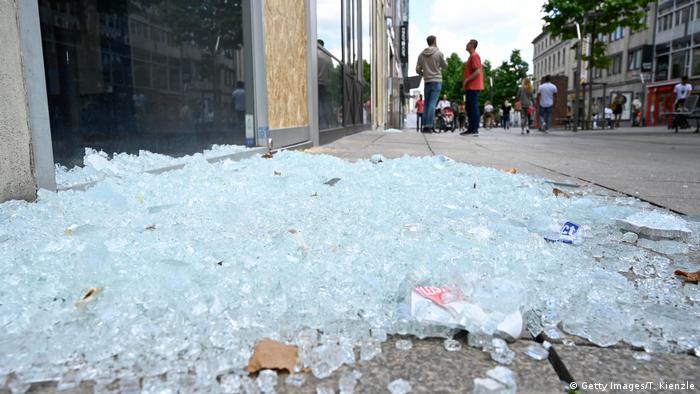 Police in the German city of Stuttgart faced backlash over the weekend over their investigation into the suspects involved in violent riots in late June.

The outcry emerged following a report in local paper Stuttgarter Nachrichten that a local police chief announced authorities were conducting research into German suspects in the riots to determine whether their parents were born in Germany.

Police are still searching for a motive behind the unrest that erupted in the early hours on June 21, which saw clashes between authorities and hundreds of youths. Some 19 officers were injured, several police cars destroyed and over 30 businesses damaged.

The reports over the probe into the suspects' backgrounds drew swift condemnation from social media users as well as Germany's opposition parties.

"Family tree research is pure racism and a scandal that needs to be immediately stopped," Dietmar Bartsch, the parliamentary head of the Left party told news outlet RedaktionsNetzwerk Deutschland (RND).

The co-head of the center-left Social Democrats (SPD) Saskia Esken wrote on Twitter that the reports "disturb me deeply."

Robert Habeck, the co-head of the Greens, said that it was important for police to investigate the causes behind the Stuttgart riots, but not at any cost. "We need to know how it happened and how to prevent something like that again in the future," he told the Tagesspiegel newspaper. "If it's true though that the Stuttgart police want to conduct 'family tree research,' that would be completely unacceptable," he added. The genealogy wording was used in the article in Stuttgarter Nachrichten.

The hashtag #Stammbuchforschung (roughly "family tree research" or "genealogy research" in English) began trending on Twitter, with many social media users drawing parallels to the Nazi regime, which used ancestry research to track down people with Jewish bloodlines during the Holocaust.

The uproar comes amid a public national debate over policing in Germany, sparked by the Black Lives Matter protests over the killing of unarmed Black civilian George Floyd at the hands of a white police officer in the United States. German Interior Minister Horst Seehofer recently prompted backlash after deciding to block a study into racial profiling in the police force, saying that it is unlikely to be happening at a large scale.

In a series of statements on Sunday, Stuttgart police said that the tactic is part of normal police work, saying that they had already used the practice "in individual cases" in the past.

Police also firmly denied that police chief Franz Lutz had used the term "family tree research." Instead, they said the police chief told a press conference that it still wasn't clear whether 11 suspects who are German nationals have an immigrant background.

"For this reason, in individual cases the nationality of the parents — and only the parents — of the suspects being determined through inquiries at the registry office in order to clarify whether there is a migrant background." They claimed that the information was necessary for criminal investigations, as well as for creating programs geared towards youths to prevent similar riots in the future.

"Preventative measures are particularly important for this age group," the statement read. "In order to be able to guarantee successful prevention work in the long term, tailor-made concepts are needed that take into account personal living circumstances as well as a potential migrant background."

Stuttgart police further backtracked on Monday in another statement, again denying that Lutz had uttered the offending term at all, according to a city representative who had listened to a recording of the meeting.

The police added that it was currently investigating 39 suspects in the violence in Stuttgart, which is said to have spiraled out of control after police began carrying out random drug checks. Arrest warrants have been issued for 20 of those suspects, 14 of which have already been enforced.

'A racist connection to stereotypical features'

Sven Adam, a lawyer who has represented many people in racial profiling cases, suggested that this is not much better. "Does that mean that someone whose parents are from Algeria, let's say, is more suspicious than someone else?" he told DW. "If you carry out further investigation into the immigrant background of someone whose personal details you have already recorded, I do think that has a racist connection to stereotypical features."

The state government of Baden-Württemberg, where Stuttgart is located, defended the police actions. Interior Minister Thomas Strobl, of the conservative CDU, was quoted by dpa news agency on Monday as saying that "establishing the living and family circumstances" was a normal part of police investigations.

A police spokeswoman further told dpa that "prevention initiatives" had to be different for "Turkish migrants from social hotspots" than for Germans who live in a privileged neighborhood.

That was also the line taken by the German Interior Ministry at Monday's regular press conference. Spokesman Steve Alter said it was part of the "standard repertoire" of police investigations to establish the origin of suspects' parents — though only if they were still minors — i.e. under the age of 18.

"The family background, especially of young people, can be relevant when one is trying to develop strategies for prevention," Alter said, before adding that it made a clear difference whether a someone had only been in the country a few weeks or had been born here and had a strong connection to society.

Age of suspects a key issue

But this only raises further questions, since the police statement does not specify whether the suspects in question were minors or not. That is a very relevant issue, according to Tobias Singelnstein, professor of criminology at the University of Bochum.

"Dealing with youth crime is certainly a special case," he told DW. "The emphasis then is on having an educating effect on the young people, and in order to do that you do need to know them fairly well — that means you need information about their living circumstances, what kind of person they are, how they grew up."

But Singelnstein added that the "immigration background" could only be one small part of a larger picture. "And I do have the impression that the police sees it a bit differently if it makes immigration background to an important criteria and gets information about that from the registry offices," he said. "I would consider that very problematic, but we don't really know exactly what the police was intending to do. In my opinion it's unusual for the police to specifically ask about that criteria in isolation."