The elite Stellenbosch University will now teach in English, the rector has declared. The move comes amid mounting pressure across South Africa to end the vestiges of racial oppression in education. 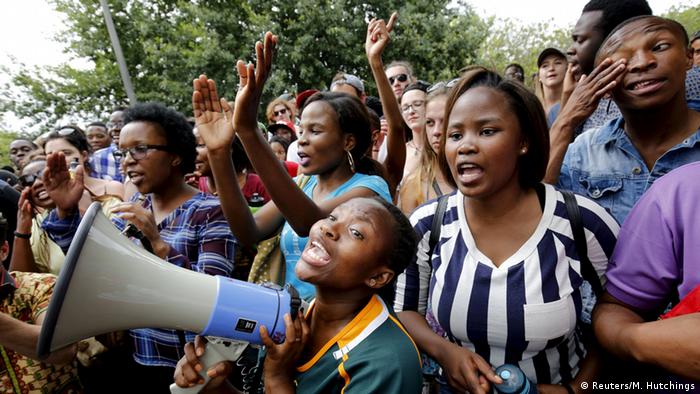 Student protestors scored a victory on Friday following months of unrest at universities across South Africa. The administration at the prestigious Stellenbosch University announced that classes will now be taught in English instead of Afrikaans, a triumph for increasingly combative students who see the university system as a racist relic of the country's apartheid past.

Activists with the student group Open Stellenbosch had complained that Afrikaans was the language of oppression, and that using it in instruction disadvantaged black students.

"Since English is the common language in South Africa, all learning at Stellenbosch University will be facilitated in English," the rector's management team wrote in a statement issued on Friday.

Abandoning a 'tool for oppression'

Open Stellenbosch welcomed the news, saying "the radical change from Afrikaans as the primary tool for oppression and exclusion, to adopting a language shared by all as the official language, is a significant victory in this struggle for access to education."

"We remember those who died for this to become possible in the long years of struggle against apartheid. In particular we remember the students of 1976," the added, referencing the year black high school students in Soweto fought against plans to begin teaching in Afrikaans.

Stellenbosch lies about 30 miles (50 kilometers) east of Cape Town, and the victory is a symbolically important one as the university was home of the Afrikaner intelligentsia during apartheid.

The decision by the rector comes after two other recent victories for students in South Africa. Earlier this year, students forced administrators at the University of Cape Town to remove a statue of British colonialist Cecil Rhodes from campus, calling it a symbol of white oppression.

Last month, protests across the country culminated in the national government scrapping a plan for hefty university fee increases that had been planned for next year. Demonstrators had argued that the introduction of larger fees would have hurt poor black students disproportionately.

South Africa's Zuma agrees to sit down with protesters

After a week of silence the South African leader has conceded to meet with the leaders of the increasingly vocal student protest movement. Zuma said government and demonstrators should "work together." (22.10.2015)